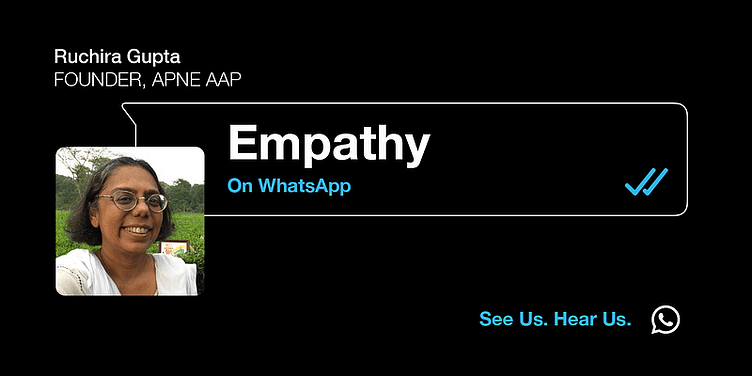 A distress WhatsApp message from the child of a sex worker in Delhi galvanised Ruchira Gupta into starting the 1MillionMeals initiative.

This is the story of how one ﻿WhatsApp﻿message became the impetus for a movement. ﻿1MillionMeals﻿— an initiative of Apne Aap Women Worldwide — has now become a metaphor for millions of meals distributed to marginalised families ever since the first lockdown was announced in March last year.

Three days after the nationwide lockdown was announced in March 2020 following the onset of the COVID-19 pandemic, Ruchira Gupta, Founder of Apne Aap, received a distress message on WhatsApp from a 12-year-old girl living in a red-light area in Delhi.

The girl was the daughter of a sex worker who was sent home from boarding school due to the lockdown. She was one of the many children sponsored by Apne Aap — an organisation that helps victims of sex trafficking and children in many parts of India.

After the panic call, Ruchira immediately reached out to a friend to arrange for 500 quick meals to be delivered and distributed in that particular area.

Soon, she started getting messages from Bihar, Kolkata, and other places, from women and children who were starving. They had sold off everything to feed their children, and the situation was not going to change anytime soon.

“Since then, I have used WhatsApp to run the world’s biggest food drive for victims of sex trafficking during the COVID-19 pandemic. I used to get messages from survivors about the food they needed, where they needed it, and mobilise students and volunteers to deliver food. I was able to establish human chains from factory owners to girls in brothels via WhatsApp,” says Ruchira.

A circle of giving and receiving

Ruchira says she ran the 1Million Meals campaign through WhatsApp by establishing several control rooms or boiler rooms on the platform. “I was also able to verify that the food had reached by asking beneficiaries to send me photos on WhatsApp, show donors the need and the impact, and guide volunteers all using the platform,” she adds.

From cooked meals, the campaign moved to the distribution of dry rations that included a bag of rice, onions, dal, potatoes, spices, soap, cooking oils, and other essentials.

Help came from different quarters — small scale businesses and merchants were ready to pitch in with just a call. The initiative spread through word-of-mouth, and later, celebrities like Chef Vikas Khanna and actor Abhay Deol amplified it on social media.

Within 100 days, the initiative crossed over five million meals, and the journey still continues.

The 1MillionMeals food drive has been a lifeline for over 50,000 vulnerable women and children during the pandemic, literally ensuring life over death.

“Some did not commit suicide as a result. Others did not starve. It kept children studying with full stomachs. We crossed our targets five times over. Our aim was one million meals for 100 days for 10,000 women and children. We were able to reach more than five million meals to 50,000 women and children. We plan to continue for 500 days till every last girl is vaccinated,” Ruchira says.

During her career as a journalist, Ruchira travelled to Nepal and visited villages with missing girls, kidnapped and forced into prostitution. These experiences became the focus of her documentary — The Selling of Innocents — in 1996, on the lives of these women in brothels in different parts of India, which also won her an Emmy Award.

“I went to brothels in Bihar, Kolkata, and Mumbai, and would see a girl as young as 13, forced to have sex with someone who was 40. Pimps and other people were exploiting them as well,” she recalls.

Apne Aap’s business plan is based on the four dreams of women: education for their children, having a room of their own (independent and safe housing), a job in an office, and justice.

This story is part of a series spotlighting extraordinary, inspiring women from different walks of life for the See Us, Hear Us campaign powered by WhatsApp for International Women’s Day.

You can read more such stories from the month-long campaign here.