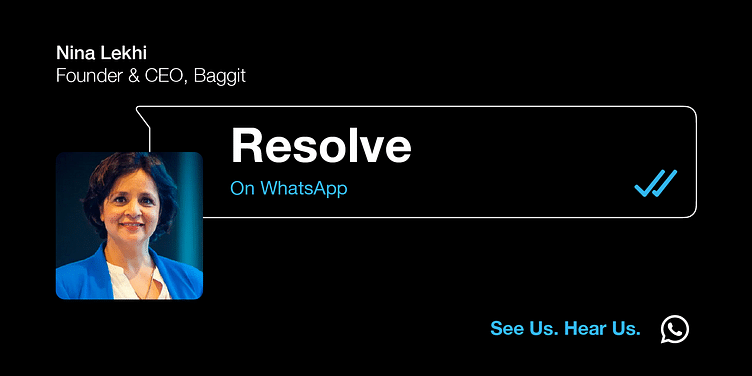 Baggit Co-founder, Nina Lekhi, has created a legacy that spans over three decades. Starting the business with just Rs 7,000, her journey is nothing short of incredible.

Over thirty years ago, at the age of 18, Nina Lekhi started Baggit as a vegan accessories brand made from eco-friendly materials, with just Rs 7,000 in hand.

“No woman in our family had ever worked before, but my mother was extremely encouraging. I think Baggit is proof that failure is the stepping stone to success,” says Nina.

We’ll come to the failure part a little later in the story. First, let’s look at where the company stands today. The Mumbai-based startup is worth Rs 111 crore with over 360 stock-keeping units (SKUs) in handbags, 360 SKUs in wallets, 70 SKUs in mobile pouches, and 10 franchised stores.

While several domestic brands source their materials from China, Baggit continues to design and manufacture its entire product portfolio in India. The startup strongly believes in the  ‘Make in India’ philosophy, designing and manufacturing with the Indian consumer’s sensibilities in mind. The company has a vision of being a responsible global fashion brand, and a financial goal of 10 by 10 - growth in turnover of 10 times in 10 years at a compound annual growth rate (CAGR) of 26 percent.

One step at a time

Initially, Nina started off with just one bag with a vision to create more bags that have their own “unique attitudes and personalities.” She sold it at exhibitions and supplied exclusively to a few retail stores.

“That was my first founding lesson in marketing. For a brand to be successful and be driven by passion, the founder needs to believe and own it completely.” she says.

Eventually, Nina started designing more variants, ranging across slings, purses, wallets, clutches, shoulder bags, totes, and satchels. She started holding her own exhibitions, which then escalated to outlets like Shopper's Stop and Regal wanting to stock her bags.

Moving with the times

Times have certainly changed since Nina Lekhi started up almost 30 years ago. Women entrepreneurs are now able to leverage the power of social media to not only power and scale their business but also to help balance between family and work demands.

“Take for example, ﻿WhatsApp﻿- it makes work more fun, adds a touch of humour with all sorts of emoticons, gifs and memes. While in office, one can send a quick voice note to ensure that all’s well at home. For those who are contemplating on starting their own venture, Whatsapp Business is an affordable medium, free of cost and convenient with its 'easy to use' payment integration. A woman sitting in Lucknow now has clients in Mumbai for her beautiful kurtas!” she says.

Rising above failures and challenges

Nina’s journey as an entrepreneur has not been without challenges. She recalls the disappointment she felt when she failed her first year at the university.

“Always being the best student, it was for me as if I'd failed in life,” she recalls.

To keep herself occupied during her year at home, she did a short-term design and screen printing course, while working as a part-time sales assistant in a shop.

She started making bags using canvas, with colourful patterns on them, and convinced the store owner to keep her creations in the shop.

Later, when she tried to open her first offline store in 2000, it turned out to be a dud. She suffered heavy losses but managed to find her footing again. The pandemic proved to be another challenging time, during the lockdown the company’s operations stayed shut for two months, resulting in big losses. “But we focused our energies on addressing a new market (mass market), strengthened execution in a new channel (online channel), and focused on improving operational efficiencies across the entire value chain of designing, manufacturing, warehousing, and selling,” Nina shares.

The true measure of her achievements are reflected not by her strides in business, but by her success in building a wholesome life replete with quality time with family and her loved ones, she believes. As a self-made entrepreneur, with a thirst for achieving more, Nina also believes that being a woman entrepreneur in a competitive segment for over 30 years has its own set of advantages.

(This story is part of a series spotlighting extraordinary, inspiring women from different walks of life for the See Us, Hear Us campaign powered by WhatsApp for International Women’s Day. You can read more such stories from the month-long campaign here.)

It's all in the genes - #SheChat with Anu Acharya, Founder, Mapmygenome