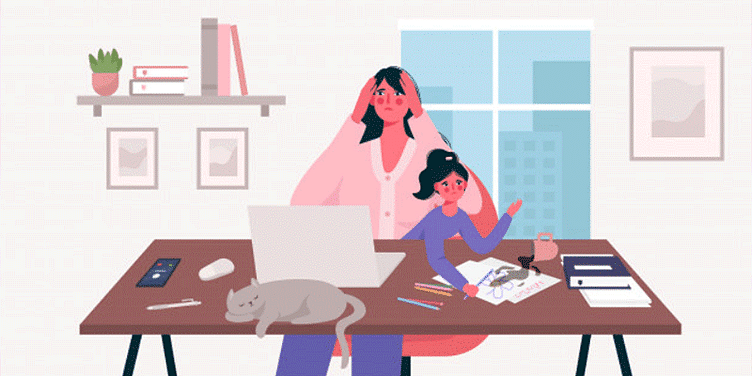 About 61 percent of woman respondents felt that work-life balance during the pandemic was much more challenging for women than men in their house, job portal SCIKEY Market Network said.

A majority of women found it more challenging to manage both professional work from home and personal responsibilities at the same time than their male counterparts, according to a report.

About 61 percent of woman respondents felt that work-life balance during the pandemic was much more challenging for women than men in their house, job portal ﻿Scikey.ai﻿Market Network said in a report.

It added that the pandemic has been affecting the woman employees more due to the struggle of managing professional work from home and personal responsibilities at the same time and location. About 85 percent of women said it was challenging for them to work from home, while 81 percent believed that it was difficult to draw a boundary between personal and professional life, it noted.

The report is based on a survey done among 2,500 woman professionals across India in nine sectors, including IT and IT service, finance, healthcare, media and entertainment, human resource, and education technology (edtech).

Further, the report showed that during this hustle, 24 percent of women said they were able to find time for themselves amid this chaos, 21 percent said they would like to work from home if given a choice in future, while 48 percent felt that the choice of the workplace should be an option.

About 61 percent women responded that they were conflicted between meeting the demands of home and the demands of family during the pandemic, it said.

When asked about the organisational support during this challenging time, 36 percent of women responded that their organisations were very cooperative during these times, and 27 percent said they received no cooperation from their companies, whatsoever.

On the other hand, 21 percent of women said they were provided with WFH support from the organisation, and only 8 percent said they were getting support for hardware and the internet.

The report also revealed that 65 percent of women expected flexible or reduced working hours as an incentive from their organisations, considering the juggling of roles at home.

This difficult time has induced a lot of mental health issues with the employees across the globe. Out of all the woman respondents, only 12 percent said the company provided support to improve and nourish their mental wellbeing, whereas 6 percent said they were being provided with guidance on health and wellbeing at this time, the report noted.