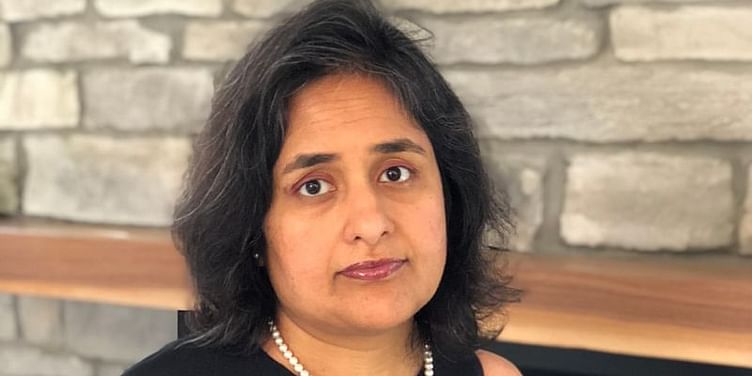 In the 80s, Sudha K Varadarajan, like every other young schoolgirl, was curious about a new class introduced at her school in Coimbatore. Keen to do something different, Sudha and a few of her friends joined the after-school class on computers to learn the programming language BASIC.

“After a couple of classes I fell in love with what I was learning. The school had invested in a single computer and we would take turns to punch out codes. Just drawing a line and circle was fascinating. That was my love for computer science,” Sudha says.

That school class led her to join a summer batch at an Aptech centre. “I always knew that this was what I wanted to do. I would spend hours in front of my screen,” she recalls.

It was no surprise then that she chose a computer science engineering course at PSG Technology College in Coimbatore. “It wasn’t just about theory, but about practically learning coding and programming.”

An internship at HP after the third year provided the opportunity to interact in a multinational company with people from all over the world. “I realised how little I knew and how much I needed to learn,” Sudha says.

In the late 90s, she decided to apply for a master’s course and did an MS in Computer Science and Engineering from University of Illinois at Urbana-Champaign. She followed this up with an MBA from Harvard Business School.

“Science is a field you keep learning in. I learn even today; it is a perennial learning curve. The master’s course was an automatic extension of my love for the subject, my desire to know more and to be better.”

After her course, Sudha joined Microsoft at Redwood. University and the job were easy with programmes to “assimilate everyone”, and she experienced building for scale.

A desire to know more about the business side prompted her to do an MBA. “Entrepreneurship in the early days in the US was a lot tougher. Nobody had told us what to do and the path that needed to be taken.”

After her stint at Microsoft, Sudha and her husband, Arish Ali, in 2000 decided to join a small startup in the Valley. Amid the tech boom, the passionate technologists wanted to get an experience of “building something from scratch”.

Dotcom bust and starting up

A year later, in 2001, the dotcom bust hit and the startup they were working for was affected.

“At that time, in the early 2000s, we had built an app store platform for one of the largest wireless providers in the US. We decided to be in the field of mobile at a time when there was no iPhone or Android. Google just had its search engine. But we wanted to be in the mobile space and decided to start our own firm,” Sudha says.

The mobile applications firm they started in 2002 morphed into a mobile commerce cloud-based platform Skava.

Sudha says they were beta users of AWS. “We built one of the earliest SaaS-based mobile commerce platforms in the world and at our peak had about 20 percent of the top 30 retailers as our customers.”

However, the journey wasn’t simple as there was no one “to guide us”.

“We started by reading a book on how to set up a company. We had questions like how to register a company in the US; we browsed thousands of books on this. We made many mistakes in the first one or two years. It was very tough. People don’t realise but venture capital didn’t return to the Valley for six to seven years after the dotcom bust. It was a dead phase,” she recalls.

From bootstrapping to an exit

The crash was hard and everything needed to be looked at closely as Skava was bootstrapped. Sudha explains the duo – technologists at hear – found it tough to gauge how to run a firm, focus on frugal marketing techniques, and draw up sales plans.

She adds that they knew how to build a product, but Skava, which involved liaising with the marketing, sales, administrative, and ops arms, taught them to make the right decisions.

Arish adds that entrepreneurs take good decisions with very little information, and “Sudha has been great at that”.

After seeing phenomenal growth in 2015, Skava was acquired by Infosys. Sudha says they took the decision by first understanding the market, and where it was headed, adding that they saw consolidation happening in the space in the next 24 months.

“We knew we needed a big player to face the consolidation. This comes with knowing the customer and the market. We saw it happening in the mobile and the traditional desktop space,” says Sudha, adding that they took the traditional approach of getting a firm to represent Skava.

After the acquisition, the focus was on integrating the two cultures and companies. “In our case it was a product company assimilating with a services firm, which means many of differences in how we look at things and issues,” Sudha says.

“It made me realise that things change. Some things for good; some the other way. So it is important to be flexible and nimble. Rigidity doesn't help anyone,” Sudha says.

The new journey with Swell

After a few years at Infosys, Arish and Sudha started Swell, an asynchronous audio platform based out of San Francisco. Unlike Clubhouse, Twitter Spaces, or others, users of Swell can post a standalone audio clip with links and images, which other users can browse, listen, and leave their own audio responses to.

The San Francisco-based startup announced its launch in India and will be catering to a young adult population.

“There are several audio platforms today, but all are in the live audio segment,” she says, adding that Swell doesn’t directly compete with any of the platforms “but complements them”.

It’s a space where people can capture moments. For example, if you are a podcaster or a live stream host, and are live streaming for a particular part of your life, what about the other times?

“This is where Swell comes into the picture. It is a place where you capture your life in audio. It is a place to keep talking, build your audio blog or portfolio. If you are walking down the street and see something that evokes a strong emotion, you can take a picture and post, but the real emotion can only be communicated via voice. Taking that picture and adding my voice creates emotional impact.”

As one of the top women in tech, Sudha believes tech is the ideal field for a woman. “There is nothing you cannot achieve with tech; it levels the playing field. Gender doesn’t play any role. In Swell, women outnumber men. The beauty of tech is that you can look at what people are good at.”

Sudha says tech is a very large field and young women must understand what they are passionate about and not give way to self-doubt.

“I have never doubted my abilities. There are things that I am the best at and nobody can tell me otherwise. I am who I am. It is another matter for things I don't know. If women reach that level of self-confidence, any bias they face will not matter. People have told me I don’t know what I am talking about and I have called them out immediately. This is my world view: understand what you are good at.”

Sudha says one of her learnings - from Skava to Swell - is learning to balance work with personal life.

“We were young and had no family commitments; the kind of hours and burn you would put in those days are not always possible. At Skava, we learnt how to manage work with family. True happiness comes when you can succeed at both effectively,” she says.

She gives entrepreneurs a piece of advice that a mentor gave in 2002. “If you last the first two years, you will make it. The first two years are the toughest; figure out the right strategy or fail fast.”

To women entrepreneurs, she only has this to say: “Know your core strength. Never doubt what your core capabilities are, and be willing to listen. There is nothing stopping us from achieving whatever we want as long as we're willing to learn this.”