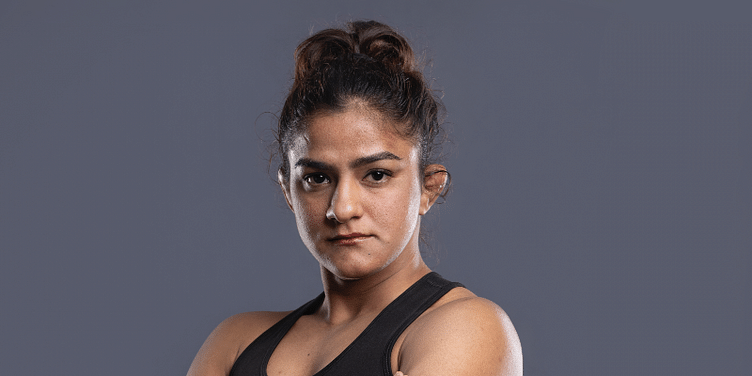 Ritu Phogat is an Indian mixed martial artist under ONE Championship. She also is a 2016 Commonwealth Wrestling champion, and won gold for India in 2016.

With the threat of the pandemic still looming large, the last few months have been difficult for many of us. But many Indian sportspersons are working hard to make India proud, showing their resilience and giving us a ray of hope.

One such sportsperson is Ritu Phogat, who is currently in Singapore participating in a Mixed Martial Arts (MMA) tournament, under ONE Championship, India. In fact, Ritu is all set to face Meng Bo, a two-time Chinese MMA champion, in the quarterfinal bout of the 2021 ONE Women’s Atomweight Grand Prix at ONE Championship: Empower on May 28.

She also won gold in the 2016 Commonwealth Wrestling Championship. Introduced to the professional sport at age seven, wrestling wasn't new for Ritu or her family.

The name ‘Phogat’ hardly needs any introduction. Apart from the fact that Aamir Khan’s movie - Dangal made Ritu’s sisters Geeta and Babita household names, the Phogat sisters are famous well on their own.

Against all odds: How this woman entrepreneur dealt with tragedy, worked multiple jobs and founded two design companies

Geeta Phogat, a freestyle wrestler, won India’s first-ever gold medal in wrestling at the Commonwealth Games in 2010. She is also the first Indian woman wrestler to have qualified for the Olympic Summer Games.

Ritu’s other sister, Babita Phogat, won the gold medal in the 2014 Commonwealth Games and the bronze medal at the 2012 World Wrestling Championship. Her cousin sister Vinesh Phogat is also a gold medal winner. Not to forget Mahavir Singh Phogat, their father, who is a wrestler himself and has trained all the daughters.

“We come from a very small village in Haryana called Balali. As a girl, there weren’t many career options to choose from. Wrestling was something I grew up watching and living, so I took up the sport at the age of seven. Since then, there has been no looking back. Fast-forward to 2019, I got an opportunity to try my hand at MMA after winning several medals for my country and state,” Ritu tells HerStory.

Why these 5 Ashoka University grads decided to take on a 1,700 km autorickshaw expedition

Wrestling came naturally to Ritu. She says she didn't think twice before getting into the professional sport. Like her sisters, Ritu too trained in the traditional ‘danglals’ (mud wrestling) in and around her villages in Haryana. Recollecting her training, she says,

“I wrestled with boys in dangals (mud wrestling) and won many times. Our dangals are very popular, especially in our part of the country. So, to win one was a matter of great pride for us. We used to participate in the smallest dangal. Sometimes we used to fight for three oranges. Yes, if we won, we would be awarded three oranges! And that was the ultimate happiness for us as children.”

It was wrestling that got her to love MMA. While wrestling, she would often think about other forms of martial arts – wrestling, boxing, kick-boxing, and Wushu – comparing one from another and researching about the sportspersons.

“When the MMA opportunity came knocking on my door, I thought why not? And it was something which I really wanted to try out. I am more of the adventurous one in my family,” quips Ritu.

Discipline all the way

While some of it may be artistic liberties, the movie Dangal did get the taskmaster ways of their father right. It was his laser-focused discipline that helped Ritu go ahead. She says,

“My father took me under his wings when I was only seven years old. As you all know, he is very strict and disciplined. So my training was very tough from day one. We used to wake up at 4 am, train till 7 am, eat a full breakfast, and then take a rest. Afternoons were dedicated to another intense training session, followed by dinner and bed by 9 pm. This was my daily regime while I was training with my father.

This discipline and values have helped me navigate through the ebbs and flows of life. Not just that, in fact, the deep-rooted values and the sanctity of the sport that has been taught to us by my father helps me stay focused,” says Ritu.

But, despite hailing from an illustrious sporting family, Ritu isn’t immune to biases. She explains that hailing from a small village, there hardly are any opportunities for women to thrive, so it was difficult for all of them.

“However, my sisters were the ones who broke the stereotype and won international medals in wrestling. So, for me, it was not that difficult. In India, women have had a different role to play in society – we were considered more as home-makers and nurturers, or at least that was the popular belief. But things are now different and the mindset has changed considerably. Now women are thriving in all aspects of life and our expectations have also changed drastically,” adds Ritu.

She adds that her sisters have shielded her and faced all the challenges before she even started out.

“But yes, in a lot of international tournaments, people didn’t take me too seriously owing to my Indian roots, but I ensured that their notions about the country and the women there had changed before they left the stadium,” says Ritu.

She adds that every person, including athletes, go through their respective highs and lows. “I have also faced these in my career and my personal life,” says Ritu. But since childhood, she has been prepared to move on and face every challenge head-on.

“A loss should not deter you from trying next time. It's natural to have negative thoughts and wanting to quit. But not quitting, preparing you for the worst, and staying the course – these are the invaluable lessons I have learnt from my dad,” says Ritu.

Today, Ritu aims to become the top global MMA player from India and take the country to uncharted heights in the MMA space. She believes that Indians can turn an opportunity into a celebration of skills, grit, determination, and victory, and Ritu wants the rest of the world to know that.

She says, “Every one of us can overcome challenges if we focus on our goals and not worry about what others think. If you are on the right path, they will all eventually join and support you in your journey. Be patient and be focused and you will see the magic. Believe in yourself first for the world to believe in you!”