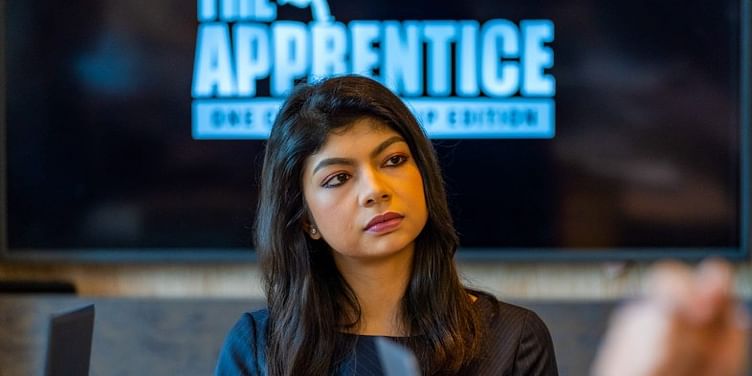 In this feature of 100 Emerging Women Leaders, we spotlight Niharika Singh, one of the few Indian SVPs in the MMA organisation, ONE Championship.

Niharika Singh was born in Delhi, grew up in Kolkata, and lived all over India thanks to her father being in the civil services. A diligent student, Niharika pursued her engineering from IIT Delhi, and later an MBA from IIM Bangalore. She then joined McKinsey & Company in Mumbai, and later held leadership positions at Treebo Hotels.

In March 2019, Niharika experienced a significant moment in her life when a friend introduced her to ONE Championship, world's largest mixed-martial arts (MMA) organisation into sports, media and product tech, none of which she was very familiar with. Despite that, the business executive became obsessed with ONE’s vision, and was determined to work for the company. Two years later, today, she is one of the few Indians holding the SVP title in the MMA organisation.

In conversation for HerStory’s 100 Emerging Women Leaders, Niharika talks about her journey so far.

HerStory (HS): Tell us about your childhood and how that shaped you?

Niharika Singh (NS): I recall being a very diligent student when it came to academics. At IIT Delhi, I was a keen participant in the college festival Rendezvous, and I credit dance for the discipline that I have inculcated. Soon after graduating, I realised that engineering was probably not my cup of tea, and hence, decided to do my MBA from the Indian Institute of Management, Bangalore.

Post that, I shifted base to Mumbai, where I joined McKinsey & Company and then went on to hold leadership positions in Treebo Hotels. I feel like I have lived in the North, Southeast and West of India before I packed bags and came to Singapore to join ONE.

HS: What got you to join ONE, and what are the challenges you have seen in the sector so far?

NS: I got connected to ONE Championship very randomly through a common friend, and I spoke to the Vice Chairman. I still remember the first conversation, which was very short. I had never worked in sports or media, and never really led a tech team, and the role they wanted me to play Head of Product for the company. Over the next 24 hours or so, I read every public article on ONE Championship, and it really struck a chord.

I also connected with Chatri, the CEO of One Championship, and I could see that he really believed in the mission and purpose of the company.

In terms of challenges, I wouldn’t say that they have been specific to the sector. The challenges I’ve seen at ONE are more around how there are so many naysayers and non-believers out there dedicated to putting down a person or company which is trying to achieve something crazy. In 10 years, ONE has really put Singapore on the world map, and as per Nielsen’s latest report on the sports industry, in 2020, ONE was amongst the top 3 global sports properties in terms of broadcast and reach, and also, among the top 5 in terms of Facebook video views.

HS: What is the overall view of MMA in India, and how are you working to bring in awareness and shift?

NS: First, I am not going to limit my answer to MMA alone because if I’m speaking on behalf of ONE, I am talking about martial arts since ONE is the home of martial arts. We also have other disciplines such as Muay Thai and kickboxing, and we’ll continue to bring in other martial arts disciplines into the fold.

ONE Championship has always intended to put Asia on the global stage through martial arts because martial art is an Asian heritage. In India, wrestling in the form of Kushti has existed for a very long time.

For us at ONE, India remains a focus country. We try to distribute our content, our storytelling to as many people as possible, through our partnership with Star and Hotstar, and we will continue to do so. We also have one of the largest rosters of Indian athletes, amongst all global martial arts companies in the world.

Ritu Phogat is now an athlete with ONE. I truly believe that one day Ritu could be the first female Indian athlete to become a world champion in the MMA space. ONE also strongly believes in teaching self-defence to Indian women.

HS: What do you personally see in sports and MMA, and why look at this segment?

NS: Sports has always excited me and got me really committed. I haven’t had any formal training in martial arts, but the fact that it is deeply rooted in Asian values like integrity, courage, humility, and resilience, means a lot. I have to say, resilience, stands out the most for me because I think it is the single most invaluable skill I have learnt in life.

HS: How was your experience of shooting for The Apprentice: ONE Championship Edition?

NS: It was one of the most surreal and fun experiences I have ever had! What began as a very awkward first day turned into something beautiful. It was also a very emotional journey for me because their stories made me reflect on my own.

HS: Why is it important to programme shows like The Apprentice for the youth of today?

NS: The Apprentice: ONE Championship Edition is the toughest Apprentice in history because not only does it test business acumen and personality, but it is an endeavour to look for the person with the fittest mind, strongest body and the most unbreakable spirit. And I think this combination is something the youth of today should aspire for. I still do. Also, the values the show cements, and the message it sends out, are very relevant for not only the youth but every human being.

HS: Do you think the values/skills learnt in sports help youngsters in their professional lives?

NS: I think the values/ skills learnt in sports help people not only in their professional lives but personal lives too. Accepting failure gracefully and learning from it, being a team player, perseverance and discipline, and learning to use the mind to conquer even physical challenges are all skills that I first learnt in sports.

HS: Tell us about the challenges you have faced, and how did you overcome them?

NS: I like to challenge myself and take on roles that make me slightly uncomfortable. And that is why when I left McKinsey, I took on a Head of Sales role at an early-stage startup when I’d never done a professional sale in my life. From there, I decided to pack my bags and move to Singapore to take on a Head of Product job at ONE without ever having worked in sports or media, or even led product and tech.

The reason I do this is only because I like to test my own boundaries. And I think when you take on something you don't have direct experience in, it really gives you the opportunity to overcome your fears and discover new things about your abilities, thus also allowing you to enjoy a much steeper learning curve.

HS: Women form a big part of ONE Championship. How do you find the right fit and the process to make it work?

NS: It is true, we do have a lot of very senior women leaders in ONE. But I don’t think this is the result of a conscious effort to encourage women. At ONE, we are not necessarily encouraging a particular segment of people but instead, we are encouraging people who are dreamers. And that has nothing to do with gender, sexual orientation, race, country, religion etc.

And when you are looking for such people, you don’t need any process to make it work. You find these people serendipitously, and in our case, many of them just happen to be women.

HS: How do you view the segment? And what can be done so that more women take up the c-suite and leadership roles?

NS: I am glad that this is a topic that is finally becoming mainstream around the world. I think, first, women themselves need to stand up and believe in themselves, and put themselves out there. And second, everybody out there who has an opportunity to offer needs to be aware of conscious and subconscious biases, and ensure that no deserving woman is denied a shot at any role because of her gender. And I have to say that today, in circles around me, I do see so many men who are super cognisant of biases, and actively propagate fairness in hiring practices, including hiring women for C-Suite and leadership roles.

HS: How can women leaders deal with conscious and unconscious biases ?

NS: I don’t really see a difference between a bias being conscious or subconscious because the impact on women is the same. The former angers me more, but the latter saddens me.

Women must stand up for themselves. If you feel a certain way, if you feel discriminated against, it’s always OK to stand up for yourself and speak up. Second, stand up for other women too. If I hear anyone talking about women in a particular manner, I do investigate and ask them to validate their statements so that they can see (in most cases) that they were too quick to judge.

Thirdly, senior women leaders must find their own style of being a leader. I have been called aggressive, bossy and even scary at times, mostly in a jovial manner, but I didn’t care because I was being myself and doing whatever was necessary to move the company forward. Of course, take feedback and act on it if that makes you a better version of yourself, but be authentic.

HS: Any advice to young girls?

NS: Two things - first, take risks. I would not have been at ONE Championship or on The Apprentice if I hadn't taken risks! Risks can lead to the most life changing events for you.