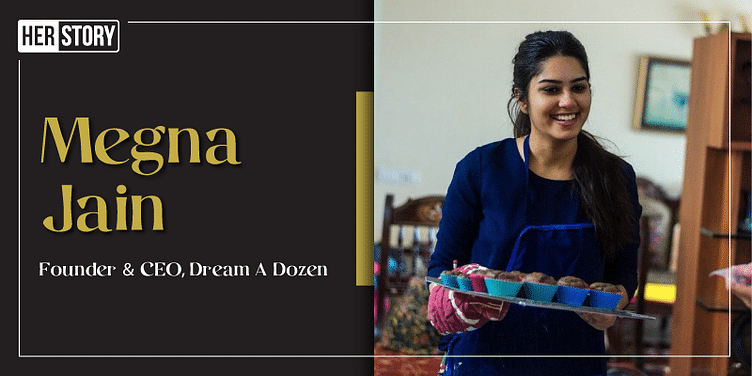 Megna Jain runs Dream a Dozen, a business she started by selling cupcakes while she was still in college. The startup now has a team of 15 and caters to large corporate clients.

On a lark, Megna Jain enrolled for a baking class during her Class 11’s summer holidays. This sparked an interest in baking and soon, she began experimenting with eggless cupcakes in her home kitchen.

A couple of years later, as an 18-year-old BCom student at Christ University, Megna decided to take some cupcakes to her college. She posted on her class WhatsApp group and received an order for 90 cupcakes. The response was phenomenal.

“I would carry baskets and baskets of cupcakes on the BMTC bus. I would decorate them with frosting in college. I hid the cupcakes under my desk and sold them during the break,” she says with a laugh.

Selling mini cupcakes for Rs 20 each and the bigger ones for Rs 40, Megna had built a thriving business.

This Mumbai-based homemaker is baking her entrepreneurial dream catering to celebs like Katrina Kaif, Janhvi Kapoor

A dream that began in college

Megna recalls how a professor had gotten wind of her venture and told her it was “improper” to sell cupcakes in college and how her classmates had stood up for her.

Fortunately, another professor connected her to Gourmet, a college cafeteria that began stocking her cupcakes. She named her venture The Cupcake Booth, selling in three flavours — vanilla, chocolate, and red velvet.

“A traditional Kerala cafe also agreed to sell my cupcakes,” she adds.

Some of her other professors encouraged Megna to pitch at business competitions and taught her how to formulate a business plan, forecast sales, and generally, how to run a business.

“One of the judges who were part of the Indian Angels Network invited us to his office to present our business plan. As I was only 18 at that time, my parents accompanied me to Mumbai. The process of registration and getting incubated seemed daunting at that time. Though we didn’t go through with it, it was a turning point. I became confident that I could do this for a living,” she adds.

After college, she took a break from her business to gather more experience in the field. She worked with InnerChef for 1.5 years and learned how home bakers and their products were onboarded onto the platform. Then, she went onto get three months of training from Cakewala and experienced how desserts were produced on a massive scale.

She also tried making cold calls and sending emails to Domino’s and Starbucks looking for opportunities. But, not hearing from them, decided it was time to strike on her own.

Interestingly, Starbucks called her back after she had decided on the logo and the direction of her venture, Dream a Dozen, but Megna was raring to go solo.

So, in January 2018, she launched Dream a Dozen from her home kitchen and within six months, had to move to another premise.

The journey was not easy. “The caretaker of the building made our lives miserable. He would cut off the power when our orders were at their peak. The signboard would be turned upside down and alcohol bottles would be placed outside our door,” she says.

Megna and her team decided to move out to a larger space in March 2020 that they planned to also double up as a bakery for walk-in customers.

And then, COVID-19 happened.

“We were closed for six weeks and I took online classes to sustain the business. We decided to pivot and stick completely to an online model knowing that the pandemic was here to stay for a while,” she says.

“As Diwali was round the corner, I approached corporates who now required gift boxes to be sent to their staff and customers pan-India. We quickly figured out packaging and delivery processes and were good to go. We delivered about 1,500 gift boxes, covering our losses and doubling our sales than in any other year in the past.”

Dream a Dozen was started with an initial investment of just Rs 5,000, and is looking at a revenue of Rs 1.2 crore this financial year.

Bootstrapped till now, most of the startup’s marketing is word-of-mouth, WhatsApp, and Instagram. Megna handles the corporate clients and the client delivers across the country.

The average order is worth around Rs 1,200. She counts brands like Amintiri, Crave by Leena, and Warm Oven as her competitors as they also operate on an online model. Its bakery in JP Nagar, Bengaluru, operates as a centralised kitchen but they no longer accept walk-in customers.

Today, Megna has a 15-member team with an all-women team of eight in her kitchen.

She says, “I am lucky my parents are my biggest cheerleaders and have all the time, even working with me until 4 am to complete orders. During initial meetings with some corporate clients, people have felt that since I am a newbie they can ask me to provide products for free. But once they hear me speak with confidence, they change their attitude.”

So far, Dream a Dozen has provided gift boxes for the likes of Accenture, Yahoo, Mediatech, IndiQube, and others. And once things return to normal, the entrepreneur plans to open another kitchen and a franchise model.