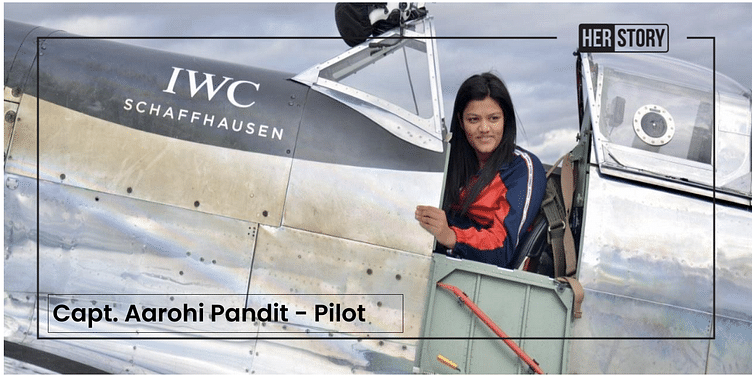 On October 15, Captain Aarohi Pandit took off from the Bhuj runway that the women of Madhapar rebuilt within 72 hours during the Indo-Pak war, refuelled at Ahmedabad, and landed at India's first civilian airport in Juhu. She was re-enacting the first commercial flight flown by JRD Tata in 1932.

Her flight from the Bhuj runaway was historic in many ways. She was re-enacting India's first commercial flight flown by JRD Tata in 1932 and paying tribute to the women of Madhapar who had rebuilt the Bhuj runway within 72 hours during the India-Pakistan war.

Creating history was not easy.

Aarohi had to navigate the plane without GPS, autopilot, or computerised equipment, always flying 7,000 feet above mean sea level.

Operating the same route from Kutch to Mumbai, with less than 60 litres of petrol for an estimated five hours of flying over the 500 nautical mile distance, Aarohi also carried a special letter from the 1971 Indo-Pak war women heroes of Madhapar village in Gujarat to the young women of suburban villages, in Mumbai, Maharashtra, recalling the 25 kg of mails that JRD Tata carried on his flight.

Speaking to HerStory on her historic feat, Aarohi says, "When I have offered this project three to four months ago, I was super excited. The day started at 6 am, bright and clear. I was touched by the presence of the Madhapur ladies, cute grandmothers who had come to see me off with their blessings."

Though the flight itself was uneventful, Aarohi admits that the lack of technology was a significant challenge. It was like going back to flight school and training using maps, charts, and visual references.

"It was 36 degrees Celsius outside, and I was afraid the engine would heat up. The other challenge was air traffic, but I am grateful to the ATC, who accommodated my flight so that it could land on time. It was a bit difficult, but in the end, it was worth it," she says.

On her arrival at Juhu, Aarohi was greeted with a traditional water salute and ushered in by the Indian Women's Pilot Association (IWPA) pilots dressed in pink. She handed over the letters from the Madhapur Mothers to her friend and fellow pilot, Keithair Misquitta.

The Madhapur women had written in their letter, "To reach for the skies, you must start by building your runway – simply, honestly, with hard work, with no time wasted, using the resources you have within and around you. You may never fly on that runway you build, but you will change the lives of the million who use it, and that is the truest sky of all that you must reach."

Aarohi believes there are a lot of similarities between JRD Tata and the women of Madhapur.

"Both have been an inspiration, and what I love is that they both worked for the country. That's one thing I had in my mind: whatever I do, I do it for my flag. The flight was all about them and nothing about me. It's a tribute to the indomitable Indian spirit," she says.

When it comes to breaking records, the sky is no limit for the 25-year-old.

In 2019, Aarohi became the first woman to cross the Atlantic Ocean and Pacific Ocean solo in a Light Sports Aircraft. Flying from Alaska's Unalakleet city across the Pacific Ocean's Bering Sea, she landed at the Anadyr Airport in Russia's far east region of Chukotka after a stopover at Nome (Ala).

She also launched the world's first all-woman team to circumnavigate the Earth in her LSA, named "Mahi", on July 30, 2018, along with Keithair.

The two flew across India's Punjab, Rajasthan, Gujarat, Pakistan, Iran, Turkey, Serbia, Slovenia, Germany, France, and Britain. Aarohi continued the expedition solo since the tiny cockpit could not accommodate other equipment for trans-oceanic flights from Britain.

Laughingly, she assures me that she did not start flying to break records.

"I was just out of flying school when the WE Expedition were looking for two young girls to take on this challenge of circumnavigating the globe on an LSA. I went through rigorous physical and mental tests to qualify. Honestly, I had no idea there were four records during this trip. I took it on because I love flying and wanted to do something out of the box," Aarohi says.

When's she is up in the air, Aarohi says she feels an incredible sense of power and freedom.

"You don't have to feel anything; you work like a machine. There are only seconds available to react to any situation. I don't go into a flight thinking I will break a record. I treat it like a regular flight. I just make sure I am physically fit, calm, happy, and healthy to step inside the cockpit," she adds.

Her love for flying took flight when she was around eight years old. Her father was in the tourism business, and she used to go on trips around the country often. Once, she saw a woman pilot in uniform and decided that she would become one too.

"From that day onwards, my parents supported me financially and emotionally. They are the reasons for my success," she says.

"Nobody is born a pilot; you have to work hard. Keep on reading and learning. When I got into aviation, I was the first in my family to join the profession. Be physically and mentally fit and take advantage of the wealth of information out there," Aarohi says.