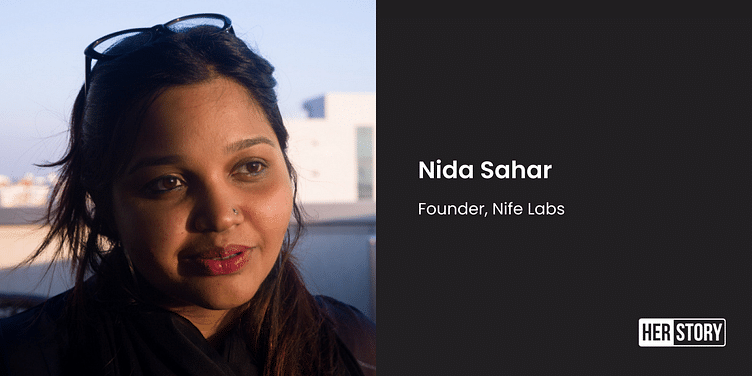 Nida Sahar is the Founder of Nife Labs, a multi-cloud, edge-computing platform that orchestrates workloads from cloud to network to edge. It aggregates telcos, data centres, and hyper scalers to provide a platform that can move workloads on-demand.

Nida Sahar’s initiation into business started at an early age. Her father was into the distribution of shoes, and her mother ran a boutique.

“I was my mother’s assistant, managing her accounts. My mother’s family is into the business of fruits and vegetables, especially import-export of mangoes. Growing up, I would often hear terms like cess, VAT, profit, loss, and partnerships at the dining table,” she recalls.

On the other hand, her paternal grandmother came from a family of teachers. Her growing years were spent opening TVs, computers, alarm clocks, creating periscopes, and using feathers to produce static electricity.

At 15, Nida started selling cosmetics and then stationery. The day after she turned 18, she applied for a PAN card and soon started filing taxes. But she knew she always wanted to pursue engineering like her father and joined BMS College of Engineering in Bengaluru for a BE in information science.

After a few years at corporate organisations and building two startups, establishing communities, podcasts, and working on consulting projects, she decided to start ﻿Nife Labs﻿.

This global public edge cloud brings the internet closer to users and enables faster and more robust internet performance for enterprises and developers.

Nida explains: “Nife provides a platform that manages, scales, and accelerates applications. Our edge devices help enterprises connect their consumers to the nearest server. We aggregate telcos, datacentres, and hyperscalers to provide a platform that can move workloads on-demand as and when the end-user needs it, at the closest endpoint optimising for performance (latency, data privacy, data processing and storage) and cost metrics as per the use case.”

“The offering is a part of the edge cloud solution where we help rebalance the applications based on computing, performance, privacy, and latency needs, meeting the enterprise and application needs, deploying on partner applications,” she adds.

Nife Labs targets IT managers and enterprise heads, dealing with solutions for many end-users and devices. It offers a platform to deploy, manage, scale, and auto-orchestrate the applications from one region to another.

While the company’s focus is on India from APAC and Spain from Europe, its clients include AI and AR/VR centric companies that need low latency solutions in media, manufacturing, and transport industries.

Nife Labs earns its revenue and charges from enterprises and developers on a pay-as-you-go model charging on API, computer, and storage. For larger deployments impacting many users and many devices, customers are charged based on a subscription licence.

“We reduce latency by 70 percent and cost by 30 percent, improving user experience and increasing productivity for our customers,” she adds. Its competitors include Mutable and Ori.

So far, Nife Labs has raised $ 165,000 through equity-based funds and grants. Nida earlier invested $20,000 from her savings. It’s also part of Qualcomm’s QWEIN cohort that has enabled mentorship and training via various programmes. She claims the startup is at an 8K MRR at this point.

Elaborating on its growth, Nida says, “We have access to 300+ locations worldwide, have completed two pilots, and are working on paid pilots. Growth has been in terms of partnerships, pilot deployments, and access to telco testbeds. Factors for our growth include 5G growth, rollouts, and increased need for low latency use cases.”

Nife was registered during the pandemic in Singapore, where Nida was stuck and had nothing else to do except work on the startup. She formed remote teams, managed a community of interns, and worked across geographies.

“Over the past year, I have learnt to use technology to the fullest and collaborate remotely. The biggest challenge was when employees and their families were impacted. As a small stage startup, we could just sympathise with the situation. This has made us sensitive to issues,” she says.

She plans to solve for the customers, grow the company and launch a low latency edge cloud.

“We plan to have access to 2,000 geo-locations and hit about 200 deployments shortly,” Nida says.