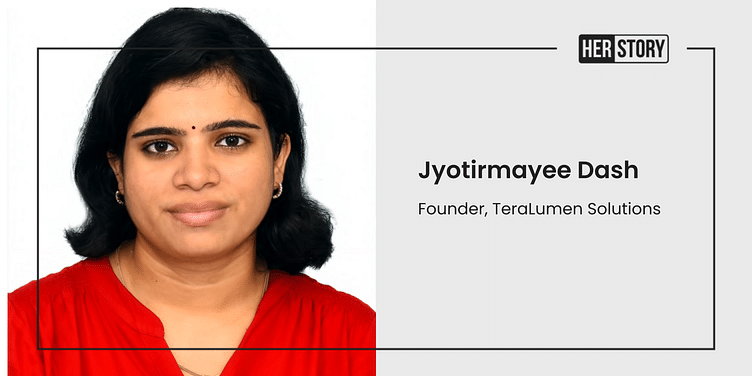 Jyotirmayee Dash is the Founder of TeraLumen Solutions, a startup that uses terahertz technology and advanced machine learning algorithms to solve complicated real-world problems. It has developed a device, which can detect cancer margin accurately and non-invasively during surgery.

While pursuing her doctoral studies in Terahertz technologies, Jyotirmayee Dash was also involved in setting up the first fully dedicated Terahertz laboratory in India.

Jyotirmayee completed her bachelor’s degree in engineering from Odisha, and her master’s in College of Engineering, Guindy, Chennai, following which she joined the CSIR to complete her doctoral studies.

After completing her PhD., she joined as an Assistant Professor at SRM University, Chennai, which allowed her to build her profile and, at the same time, start planning for her entrepreneurial journey. She utilised the time to save up funds, build a solid  business plan, and prepare proposals.

“Despite the immense development in India over the past few decades, there is still a gap in the development of state-of-the-art technological devices. Most of the devices and components need to be imported from Europe and the US. This gave me the drive to build India’s first Terahertz company,” she says.

“The last two years have been the most challenging of my life and rewarding at the same time. Starting my own company was possible due to the active support of the DBT (Biotechnology Ignition Grant (BIG) Scheme - Biotechnology Industry Research Assistance Council (BIRAC) and DST (NIDHI-PRAYAS),” she says.

Choosing Chennai as the home base, ﻿TeraLumen﻿ developed the first intraoperative device in India, which can detect cancer margin accurately and non-invasively during surgery.

Jyotirmayee explains: “The device uses safe and reagent-free technology. Our product will help oncosurgeons make accurate and informed decisions in real-time during surgery regarding the cancer margin instead of waiting for days for histopathology results. This device will reduce the number of repeat surgeries significantly and     at the same time conserve maximum healthy tissue.”

Apart from this, TeraLumen is also working towards developing and manufacturing cost-effective and compact Terahertz devices for industrial non-destructive testing (NDT) applications.

“As a quality control and quality assurance management tool, NDT plays a vital role in industries such as automotive, aerospace, pipelines, bridges, refineries, as well as power stations. The current NDT industry lacks suitable measurement and testing techniques for process and quality control. Terahertz NDT will help in real-time detection of voids and defects, multilayer thickness measurement and micron-level coating thickness measurements in aeronautical, automotive, pharmaceutical and oil and gas industries,” she adds.

Dr Shaumik Ray, Co-founder at Teralumen, worked with her at CSIR. She says: “We were actively  involved in setting up the first fully dedicated Terahertz laboratory in India. Together, we have been instrumental in starting the company and building our first device from scratch along with Dr Bala Pesala, who was my PhD guide, and Dr Shyamsundar Mandyam as mentors.”

With the device, oncologists can access the margin in real-time, with which the time of surgery will be significantly reduced. Hence, the doctors can attend to a more significant number of patients. TeraLumen will offer a B2B model with its target customers in the aviation, automotive, pharmaceutical, and oil and gas industries for the-based applications.

“Our business strategy is based on both CapEx and OpEx models. The revenue generation will be through direct product sales, leasing out of systems, consulting services and annual and comprehensive maintenance contracts,” she says.

Impact of the product

In India, about 2.25 million people live with cancer as of 2018, according to the National Institute of Cancer Prevention and Research (NICPR). Although cancer surgery is the most fundamental protocol in almost all cancer types, margin analysis is critical in some cases, such as breast conservation surgery, oral cavity, and head and neck cancer. Around 30 percent of cancer surgeries fail due to inaccurate margins, which leads to the need for second surgeries.

Jyotirmayee claims that the system developed at TeraLumen will aid oncosurgeons to reduce approximately 1.2 lakh second surgeries in a year, thereby benefiting many patients.

She also cites the importance of the device in NDT applications, which will help prevent failures that could harm safety, reliability, and the environment.

“To prevent such occurrence, globally, the aviation industry spends around $80 million towards maintenance and repairs, with 80 percent of their inspection of damages being done visually. Furthermore, in several industries, suitable measuring and testing techniques are still lacking. Due to such failures in efficient NDT techniques, several major mishaps have happened over the years, such as the Colombia Space Shuttle disaster in 2003, a large explosion at the Caribbean Petroleum Refinery in Puerto Rico in 2009, or even the incident in Deepwater Horizon Rig in 2010, in the Gulf of Mexico. Effective Terahertz-based systems can be deployed in such critical industries to reduce mishaps in the future,” Jyotirmayee explains.

However, according to Jyotirmayee, its main drawback is its low sensitivity and specificity, and the device is deployed as an invasive technique.

The Government of Tamil Nadu has also recognised its work and potential through Entrepreneurship Development and Innovation Institute – Innovation Voucher Programme. Being selected as the finalists in QWEIN has helped TeraLumen gain visibility, and the support from mentoring sessions has given it a sense of direction.

Jyotirmayee believes its most significant  success has been to ultimately develop the device and associated software for real-time data acquisition and validate it with many samples. The key challenges include the unavailability of components and devices related to Terahertz technology in India and Asia. They have been heavily reliant on the US and European manufacturers, which has cost them time and money.

“I plan to build a solid technology-based company and provide effective  solutions for critical challenges in various industries. I would like to contribute towards building a strong team with very high technological expertise that can impact the nation’s growth in the future,” Jyotirmayee says.