With 58 pc women across operations in 140+ countries, how VFS Global is promoting gender equality at the workplace 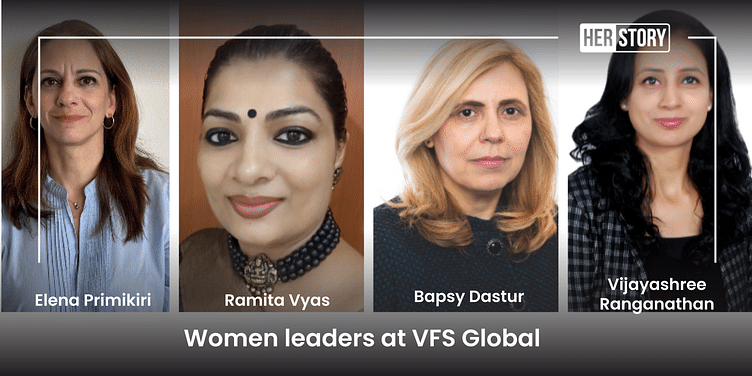 Batting for equal opportunity and gender diversity, VFS Global has several women leaders at the helm of diverse operations. They tell HerStory why an equal opportunity mindset and promoting gender equality can lead to a gender-equal society.

This means that organisations that view gender diversity as essential, benefit from it.

Women in the Workplace, the most extensive study of women in the corporate US conducted by McKinsey in partnership with LeanIn.Org, points out that to drive change, companies need to invest deeply in all aspects of diversity, equity, and inclusion.

What Women Want – And Why You Want Women – In the Workplace, a scientific study conducted in partnership with the Center for Creative Leadership (CCL) and Watermark, found that having more women in the organisation might make it a better place to work. An organisation with a higher percentage of women is predicted to have – more job satisfaction, more organisational dedication, more meaningful work, and less burnout.

Leading the way in diversity and gender balance is VFS Global, an outsourcing and technology services company, with an overall female-to-male ratio of 57:43 at the end of 2020.

In 2021, the company took strong targets to improve its female-to-male ratio at the management level, which is currently at 20:80.

Many vital global mandates in the organisation such as legal, risk and compliance, taxation, ESG, quality and transformation, corporate communication, and regional operations in key international markets are managed by women leaders.

Policies and frameworks for gender equality

VFS Global signed the British High Commission 'UK in India' Network Gender Equality Charter, which focuses on promoting gender equality within our workplaces and beyond, and empowering people of all genders to break down gender norms and build a gender-equal society. Adapting and staying updated with the times, it also released its revised Diversity and Inclusion Policy for employees in 2020.

Since 2016, the organisation has rolled out more than 400 leadership development modules with measurable metrics, for more than 3,000 employees. Of these, 41 percent of participants (in 2020 and 2021) have been women.

It has introduced the Women Network to:

[100 Emerging Women Leaders] Meet Dr Madhuri Roy, who became a doctor by studying in the light of oil lamps

In her recently released memoir, My Life in Full, former ﻿PepsiCo﻿ CEO Indra Nooyi writes, “There is no single reason why more women don't lead big companies. There are hundreds of issues—some tiny and difficult to pinpoint, and some huge and structural—that add up to make it so. There is no list of ten items that simply need fixing. Despite all the progress we have made, the modern workplace is still replete with damaging customs and behaviours that hold women back.”

Bapsy Dastur - General Counsel and Head - Corporate Risk, Compliance and Legal at VFS Global, believes it’s not the pipeline but the pathway that is often the problem.

“Women often face significant barriers for career advancement rather than for entry into the workplace. Studies reveal that ideas of ambition and directness in leadership may be considered “masculine” but often negatively labelled in women as “aggressive”. As a result, men are often considered for leadership positions. In contrast, women displaying the same qualities may be penalised,” she says.

“Social factors such as absences due to maternity leave and looking after sick children may have also hurt women’s careers. More men and women supporting each other as allies are needed, such as speaking up, valuing skills, understanding complexities and challenges, mentoring, and actively strengthening the organisational culture to promote equal opportunity would improve ratios. As of May 2020, only 7.4 percent of the CEOs of Fortune 500 companies were women,” she adds.

“Things are gradually looking up with companies focusing on the professional development of their women workforce and selecting women for leadership positions. Recently, we have seen many such recent corporate announcements (by Adobe, Cisco, etc), which indicate a positive sign. I have always believed that leadership should be gender agnostic. It is more about the capability and strengths of an individual. So, any worthy individual should always be allowed to lead,” she tells HerStory.

Vijayashree Ranganathan, Head of Taxation at VFS Global, says a woman’s job often spills over from the office space to a home.

“Balancing work and family responsibilities is one of the most challenging obstacles for women seeking leadership positions. Gender stereotyping has shadowed women’s career choices, often restricting them to fields that need emotional intelligence, such as education, finance, or HR. This has stumped the growth of women’s representation in other job roles. Typical leadership attributes such as being analytical, competitive, aggressive, independent etc, are considered to be largely male-centric. It is erroneously assumed that women do not possess many of these personality traits,” she explains.

Elena Primikiri – Head of ESG, believes there are numerous reasons behind women being underrepresented in managerial and senior managerial positions. Some of them are societal views about the woman's and man's roles; marriage and children; a lack of working women's facilities; men's and sometimes even women biases; and the prevalence of men's ideals in organisational cultures.

“Women want more than simply a seat at the table; they want to talk, to express their opinions, and the opportunity to have their proposals and ideas evaluated and implemented, and make decisions and take responsibilities accordingly. They desire the chance to advance in their jobs. In that perspective, VFS Global has been developing multiple initiatives to increase women’s representation in leadership positions and offer its female employees the opportunity to develop,” she says.

At VFS Global, Yummi Talwar, who heads Europe Operations, believes that the obstacles for women are unfortunately similar. She has worked with women across cultures–from east to west–to understand that.

“At workplaces, we all agree majority of the decision-makers are men and sadly the unconscious bias exists, which doesn’t support the void in the already stretched pipeline for women, and this vicious circle is what needs to break,” she says.

To move within the organisation and in their careers, women need role models to help them in their journeys. At VFS Global, Bapsy has been instrumental in creating the Women’s Network.

She explains: “The Women’s Network at VFS Global is not only for women but open to all so that there can be an enhanced organisation-wide focus on equal opportunity and gender diversity. Gender diversity is correlated with company profitability and value creation, with diverse teams bringing value and success. Across VFS Global, our poll results were extremely supportive of the importance of creating a women’s network to support individual contributions, acknowledge achievements of colleagues, provide mentorship and together drive further success for VFS Global.”

Ramita Vyas – Head of Quality and Transformation, adds, “It’s a myth that strong women leaders don’t get along. I, for one, have had lasting friendships with strong women both at work and in personal life.”

As a member of the VFS Global Women’s Network, Elena hopes to encourage other women and be inspired. “Over my professional life, I have been mentoring women and will try to continue to motivate and inspire them to advance in their careers by providing personal and professional development guidance,” she says.

According to a 2020 McKinsey report that followed the trajectories of hundreds of companies with more than 30 percent women executives revealed that they were more likely to outperform companies where this percentage is in the range of 10 to 30. In turn, these companies were more likely to outperform those with even fewer women executives or none at all. A substantial differential likelihood of outperformance – 48 percent – separates the most from the least gender-diverse companies.

“The future is intersectional,” Ramita quips.

“To my mind, an ideal workplace is where equal opportunity and fair treatment is the norm for all employees, irrespective of varied economic backgrounds, gender identities, sexual orientations, and race. Driving a culture based on mutual respect and trust promotes accountability amongst employees and fosters good team dynamics. The only way to remain relevant as an employer is to ensure that your employees feel comfortable in their skin and judged for talent alone,” she says.

Elena believes equal opportunity stimulates and supports co-workers’ performance, helps attract and retain top talent, and plays a unique role in employee retention. People tend to stay longer where they are treated fairly and valued for their contribution.

“Embracing diversity and providing equality goes a long way in promoting a work culture. It signifies a culture of inclusion and progressive mindset where talent and opportunities go hand in hand.”

On International Women’s Day this year, the VFS’ Al Hada Visa Application Centre in Riyadh was managed by an all-women crew. The women-only team handled visa applications for 28 countries including, Canada, the United Kingdom, and countries falling under the Schengen zone. In addition, female team members took control of security, operated control rooms, and transported passports to respective embassies/missions.