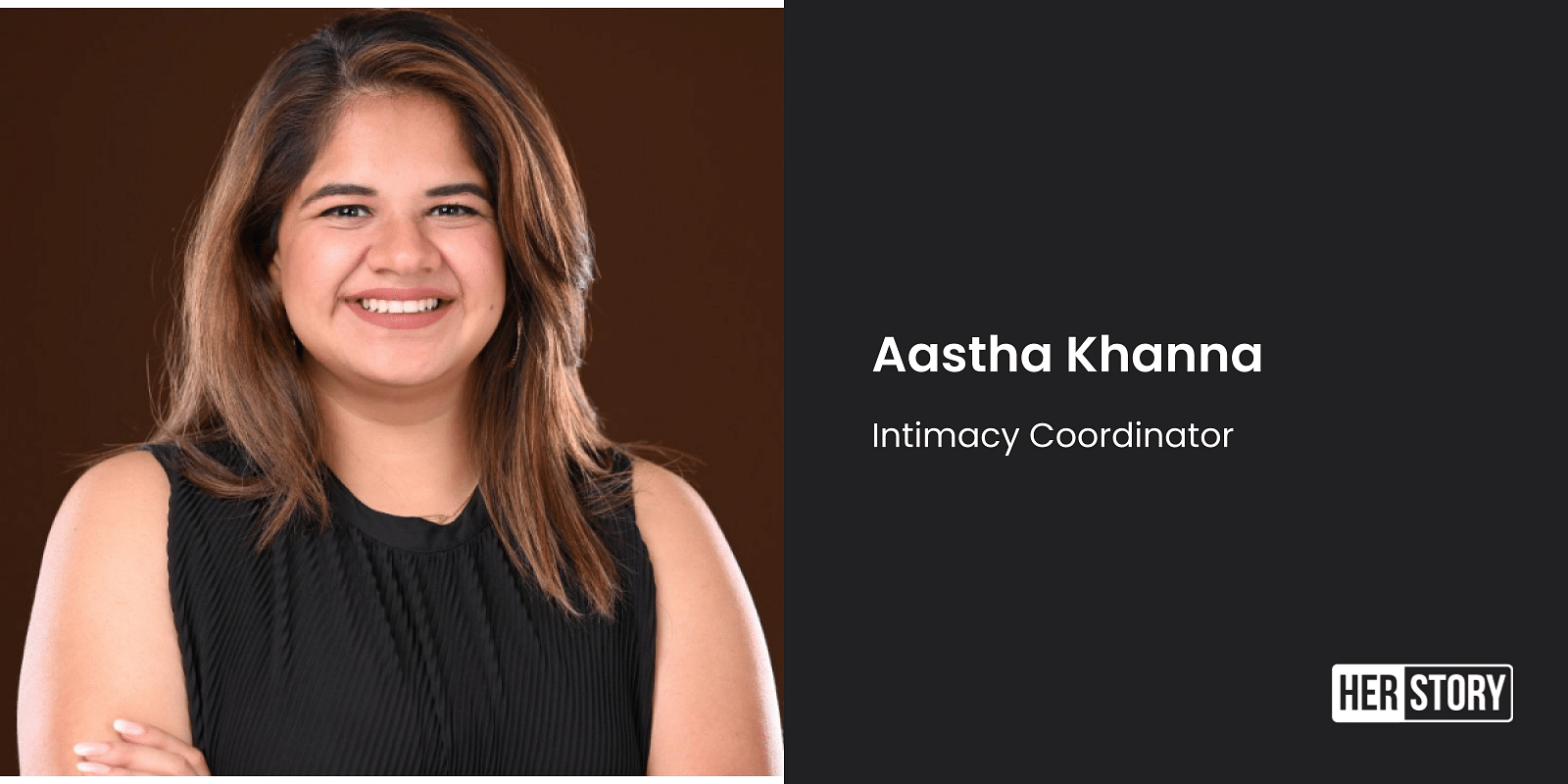 In her memoir, The Beauty of Living Twice, Hollywood actor Sharon Stone revealed she was tricked into removing her panties during the infamous cross-legged scene in her breakout film, Basic Instinct. She was told her private area would not be seen on film.

Emelia Clarke also spoke of instances where she felt pressured to do nude scenes on Game of Thrones. Closer home, South actress Rekha said that actor Kamal Haasan kissed her without consent in Punnagai Mannan.

With intimate scenes involving partial nudity, kissing or simulated sex in Indian films and web series becoming common, there is a need for movie sets to be a safe working place.

This is where Aastha Khanna steps in, who may well be on her way to becoming India’s first intimacy coordinator, ensuring the comfort and well-being of actors who have agreed to participate in intimacy scenes on sets.

A role that came through research

However, Aastha did not set out to become an intimacy coordinator. After completing her course on film and television studies from the University of York, she moved to Mumbai to work as an assistant director in films.

“I was signed on a film by Shakun Batra, and when we were discussing it, I found there was a bit of intimacy involved. He was trying to figure out how to make it look natural, like a normal human experience. While he was trying to find out how the West works in his regard, I too started my research,” she tells HerStory.

Aastha found that the role of an intimacy coordinator was paramount when it came to filming explicit scenes but nobody was doing this kind of work in India.

“It was exciting because it marries two fundamental causes I feel strongly about – the #MeToo movement and inclusion and diversity when it comes to gender and sexuality,” she says.

She told Shakun that she would take six months off and move to Los Angeles to train as an intimacy coordinator after the shoot.

Meanwhile, COVID-19 struck, and the film was stalled. With very little to do, Aastha decided to check if she could be remotely trained. She enrolled with Amanda Blumenthal’s IPA intimacy coordinator training programme and received a certification.

While the role of an intimacy coordinator has gained popularity in the West, Aastha believes it will take time for the profession to be accepted in India.

“It's a completely different department, and at the teething stage. So we are learning as we go. There is a bit of pushback; there is scepticism involved, especially because of the taboo around anything to do with intimacy,” she says.

“I always had an obvious idea of how the role would be received, and it would require work – to be understanding and adjusting and work differently around each actor, director and every production,” she adds.

She observed that some would be very “woke, others would be sceptical”, and some would say that while they wanted an intimacy coordinator, they didn’t know how to collaborate with one.

Aastha explains, “One good thing about this work and this industry is that a lot of work happens through word of mouth. There’s no doubt you have to prove yourself. Then, people start taking you seriously when they start accepting the work you do. Amazon, Netflix, and Hotstar are very welcoming because they're international platforms with other intimacy coordinators. So they understand that concept, as opposed to smaller productions or like even the larger productions in India that have probably never had an intimacy coordinator.”

Aastha says the specifics of the process differs according to what a scene or a show requires. She compares her role as a “marriage between a choreographer and action”.

However, she clarifies that intimacy scenes are not just about making out, stimulating sex and nudity but also involve working with minors, people of different genders and sexualities, and backgrounds.

According to Aastha, the role of an intimacy coordinator, by definition, is to uphold the performance consent of the actor while at the same time making sure that the vision of the director is achieved.

Aastha is present on the sets to make sure the actors feel comfortable; the scene has been rehearsed, they have all of the information they need to be comfortable performing.

What happens when the director and actor have different ideas about intimacy? Here, Aastha believes communication is critical.

“We have conversations, and communication is clear at all times. I always encourage obvious, concise, brief conversations around a sense of intimacy. What do they do? What are their hands doing? What are their legs doing? What part of their body are you seeing? How are you planning to shoot this? How many people will there be? Who's watching everything? So the entire list of questions will be asked to the director, and at the same time, the actor will be given all of that information.”

Also, care is taken to ensure that if the actor doesn’t like to be touched somewhere or has an experience that doesn’t allow them to film in a certain way, they don’t have to; this is explicitly drawn out. Body mapping also helps the actors feel comfortable being touched in different kinds of grips. During COVID-19, some actors were not entirely comfortable kissing each other. So different methods of choreography were introduced to achieve a similar emotion.

Aastha says the actor's rights are protected to the extent that they get to reverse consent if they change their mind on the sets.

“I will always uphold performance consent. If somebody is uncomfortable doing something and decides to retract, we will try to find a solution. We will try to speak to them if we can find a different way of achieving what we're trying to,” she says.

An intimacy dialogue is an addendum to the performer production contract, which defines what is expected from the performer that has been pre-discussed with the performer and the director. While caring for the performer, it also makes sure that the film doesn’t suffer.

Aastha also carries with her an intimacy toolkit.

“To create simulations, we have certain tools like a prosthetic penis, an athletic guard to circumvent arousal and ensure genitals aren’t touching each other, modesty garments for actors doing nude scenes, and to the smallest things like mint, toothbrushes, deodorant, Listerine, nail cutters and more,” she adds.

Most of the projects Aastha has worked on are in the post-production stage, so she cannot reveal their names. So far, she has worked for Shakun’s film, a couple of independent films, Dharma Productions, and the trifecta – Netflix, Amazon Prime, and Hotstar. Two projects will be released in January.

She has also started The Intimacy Collective to create a set of guidelines for screen and stage performance and how to navigate intimacy in our cultural context. These have been culled from the best practices followed around the world.

“I see a lot of interest around the work and support from producers and performers. So, I see this work becoming, if not mandated, a solid guideline in India for people to adapt,” she signs off.