Pushing the limits: Meet the first woman to run 480 km from Manali to Leh in 156 hours 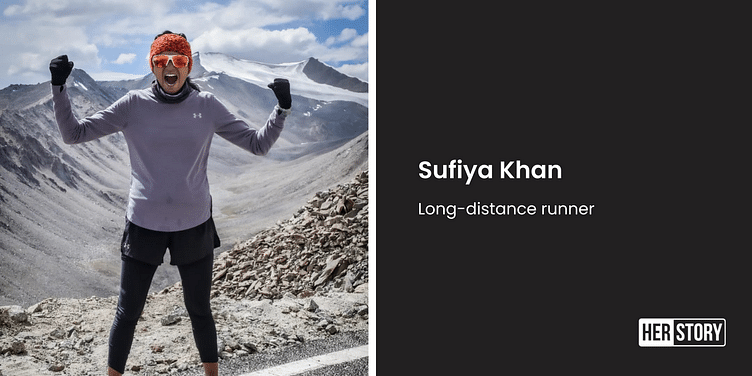 Sufiya Khan is a two-time Guinness World Record Holder. She recently completed the Himalayan Ultra run expedition, becoming the first female runner in the world to have attempted the run from Manali to Leh.

On October 1, Sufiya Khan completed a 480 km run from Manali to Leh, becoming the first female runner to do so and enter the Guinness Book of World Records.

She completed the Himalayan Ultra run expedition in 156 hours, passing through one of the world’s most challenging and highest highways, climbing up five major passes with extreme weather conditions, with temperatures dropping as low as minus five degrees.

Sufiya is no stranger to records.

This is her third long-distance record-breaking run. Earlier, she completed the distance from Kanyakumari to Kashmir and traversed the Golden Quadrilateral – a network of highways that connect the four major metros in four directions, Delhi, Chennai, Kolkata, and Mumbai.

“It feels incredible at the end of it,” Sufiya tells HerStory as she recounts the gruelling and arduous journey on one of the roughest terrains of the world.

“I was surprised that I managed to complete the journey. During the training phase, I had my doubts about whether I could do it. It felt tougher than I thought it would be,” she says.

Training for the terrain

Sufiya trained for 20 days on practice runs on different stretches of the route, trying to understand the topography and acclimatising to the high altitudes, especially the dip in oxygen levels. She spoke to army officials and locals, and understood that it was a route fraught with many challenges.

Despite the arduous preparations, things did not go well as planned. The first climb, up Rohtang Pass itself, was a challenge.

“It’s a mind game,” she says. “However hard you train physically, your mind has to keep up with you as well.”

She also had to wade through mountains of dust brought on by construction and run through snowfall. During one stretch, her oxygen saturation level dropped to 56, and she fainted.

Her team revived Sufiya, and after sleeping for three to four hours, she continued her run throughout the night, aiming to complete her expedition on time.

“I was also running along some of the pristine and most beautiful stretches on earth. I saw mountains change colour, felt the snowflakes on my face, and watched in awe as nature kept changing every few kilometres,” she says, a sense of wonder in her voice.

After her Kashmir to Kanyakumari run, Sufiya teamed up with Under Armour, the American sports equipment company that provided apparel and training.

“They challenged me to push my limits. My partner, Vikas, my coach, volunteer runners, and others accompanied me on my expedition,” she adds.

She is overwhelmed by the support of the army officials and the people along the route that provided her with medical help whenever required.

“On the last day, the run downhill gave me the most breathtaking views – the Upshi valley, greenery, mountains and a flowing river. I had a strong sense of energy and euphoria, and was able to finish the run quickly,” she says.

Strength of mind - and body

As a runner, Sufiya did not start young.

In 2017, after 10 years of working gruelling night shifts in the airline industry, she took up running for fitness.

After seeing perceptible changes, she ran her way through marathons and ultra-marathons, but soon, more than running was on her mind.

“I thought running was a good way to spread a message. I was keen to explore the country by pushing my limits. I did not run to compete or break any records. I wanted to test my abilities with every challenge, and spread the message of hope, oneness, equality, peace, and humanity to as many people as I could,” Sufiya says.

Sufiya relied on strength and core muscle training to help her during the expedition on the physical front. She also practices yoga and pranayama for mental strength.

“The only limits that exist are in the mind. I’d like to inspire people, especially women, to come out of their shell, remove the barriers in their minds, and follow their dreams,” she says.

In 2024, Sufiya aims to run around the world to spread the message of Vasudhaiva Kutumbakam (the world is one family). Before that, there are many other runs to explore and miles to go!