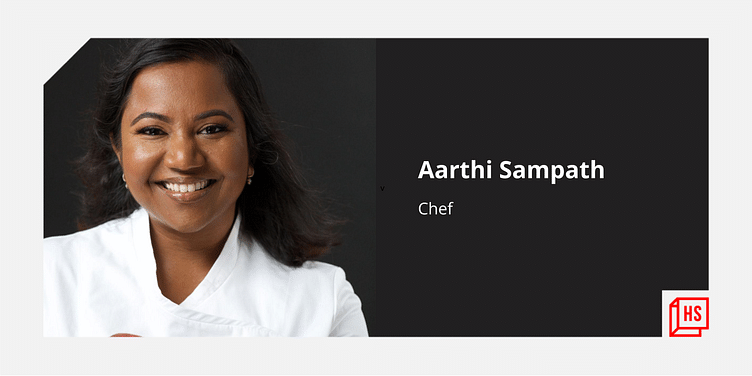 Chef Aarthi Sampath, the winner of American food show Chopped, worked at Michelin-star restaurants like Junoon, ran her own food truck, and also achieved fame as a judge on MasterChef Tamil. Here’s her story.

Chef Aarthi Sampath, well known in India as the judge of MasterChef Tamil, says her life has been the sum of all her varied experiences.

While in the US, she worked in Michelin-star restaurants, turned entrepreneur with a food truck, and in her spare time also cooked up meals for a homeless shelter.

She explains how these diverse experiences have been life-changing and have made her a better cook and an even better human being.

“In a Michelin-star restaurant, I learned to cook food at the fine dining level, and what it takes to run a place for rich people. With the food truck, I wanted to understand what the common man wanted to eat, and what they could afford. When I was cooking for the shelter, I understood I was cooking for people who want the bare basics; they don’t care if you are a celebrity chef – they just want a warm meal. Every experience has shaped me in a different way.”

“I think I have become a better manager, am more kinder to people, have more understanding of what the consumer wants, and am a better cook and a better person because of these experiences,” she adds.

As a Tamil girl growing up in Mumbai, Aarthi was exposed to a cosmopolitan culture, which included food of different kinds. Lunchtime meant sharing dabbas of friends who introduced her to different textures, aromas, and tastes of food from all over India.

Initially, Aarthi wanted to become an actor. But her mother laid it bare for her – as a dark-skinned girl, it was not an option.

While other girls around her were already planning their careers, Aarthi was still undecided. Her annual summer vacation to her grandmother’s home in Chennai changed all that. She enrolled for a cooking class and by the time she was back home, she was hooked.

After cooking up a storm in her mother’s kitchen with recipes from different cookbooks, there was disappointment all around when Aarthi announced to her family she wanted to become a chef.

Getting on the food track

She persisted, joined the Indian Institute of Hotel Management, Jaipur after school and an externship with the Oberoi Raj Vilas Hotels changed her thinking forever.

“I went in to work at 9.30 am in the morning, kept standing for more than 10 hours, getting back home only by midnight on most days. For a 19-year-old who had never done any kind of hard work in life, this also brought in some doubts. Is this how my life was going to be? But I had fought with my family for this and I had to stick it out somehow,” she recalls.

After her externship, she was hired by the Taj Hotels, as part of their Kitchen Training Programme, where only 12 students were hired from across India.

The initial years that led her rise to a sous chef were very difficult but they made Aarthi fall in “love with cooking, enjoy the learning experience, and love food”.

Her family was still hopeful she would do an MBA and go the corporate route, as they had heard stories that women in the hospitality industry tend to drop out because of the tedious working hours.

At the time, Aarthi was also drawn by the food scene in the US and Europe, and felt that kind of “food passion” was missing in her life in India.

“My dream was to go to a real culinary school and that culminated in Johnson Wales University in Rhode Island where I specialised in baking with pastry and food service management,” she says.

Tough industry for a woman to be in

That she had experience as a sous chef in India did not matter in the US – she had to start from scratch with another externship at Junoon, Chef Vikas Khanna’s Michelin-star restaurant in New York City.

She joined the place after finishing college and was helping them open a sister restaurant in Orlando when Chopped happened . As the rest, as they say is, history. She won the competition and that led to more popular stints and the food truck.

But it has not been an easy journey in an industry that labels “men the best chefs in the world”.

Aarthi was almost always the only woman in most kitchens she worked in initially.

“There are a lot of conversations that make you feel uncomfortable. There is always some sort of sexual undertone and this happens to everyone. I didn’t really get the encouragement I was looking for and decided I had to encourage myself,” she says.

Today, the diversity of Indian food may have reached all corners of the world, it was not always the case. It begins right from the name, she points out, where a dish like Bhindi Do Pyaaza would have to be termed Okra with Onions and not go by its original name.

Then there are the racist comments from other chefs. “White chefs have told me your food is smelly and terrible, and don’t bring that into my kitchen,” she says.

On TV with MasterChef Tamil

When Aarthi began noticing that chefs on TV were becoming popular and garnering eyeballs for their restaurants, she began thinking of doing the same.

“I also realised that as a woman, it was becoming so overbearing. Sometimes, in some kitchens, it was really tough. I told myself the only way to get out of this is if I got famous…people might leave me alone,” she says with a laugh.

She had lost her job at Rainbow Room, a fancy restaurant, during the pandemic and was struggling to find another. She came down to India to spend some time with family when a friend who worked on MasterChef Tamil told her they were looking for a guest judge.

“It was only a matter of two to three days and I agreed. But that turned into a full-fledged audition for a permanent judge and turned out to be something I enjoyed immensely. Meeting and interacting with actor Vijay Sethupathi on the sets was also a wonderful experience,” she says.

Television brought fame to Aarthi with Tamil MasterChef. Her most memorable moment on the show was cooking Kasthuri Thangam, a dessert, reminiscent of her grandmothers’ cooking.

Currently, Aarthi is back in the US, where she is planning to open a new restaurant with a partner, to showcase a combination of South and North Indian cuisine.

“I will be the South Indian expert in this North-meets-South menu. My dream is also to open a restaurant in Chennai some day on property owned by my dad. He always talks of me opening a café or a restaurant there. I feel obliged to fufil his dream,” Aarthi signs off.