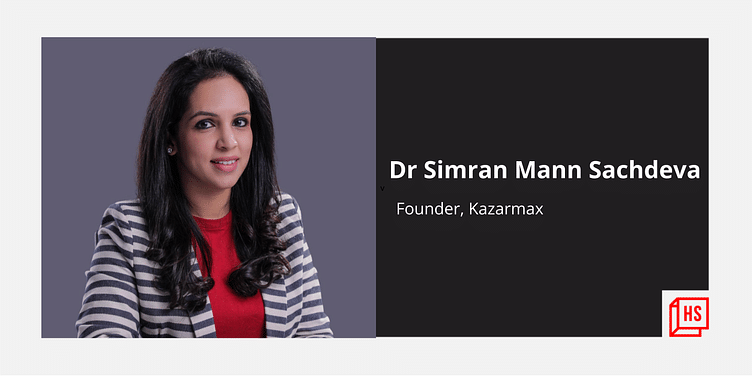 Dr Simran Mann Sachdeva is the founder of Kazarmax, a homegrown footwear brand that has proven to be a market leader in children’s footwear and is gradually increasing its stronghold in the women’s and men’s footwear category as well.

Dr Simran Mann Sachdeva was born and raised in Chandigarh in a family of lawyers and married into family of entrepreneurs. While growing up, she dreamt of being a veterinarian because of her love for animals.

But life, she says, had other plans, and she ended up studying for a DDS degree in Boston.

Simran moved to Delhi after getting married, and practised dentistry at Medanta Hospital and Primus Hospital.

“After practising for a few years, I took a hiatus from dentistry to care of my children. In the meantime, we moved to the buzzing city of Gurugram in Haryana. It was in this city that my father-in-law had set up garment manufacturing and export factories for over 30 years. I believe this was the first step towards my entrepreneurial future,” she tells HerStory.

While at home raising her children in the early years, Simran loved dressing them up in coordinated outfits. She ended up calling for most of her kids’ clothes and shoes from relatives settled abroad. She was also reminded of the time her mother was doing the same almost 30 years ago. She believed nothing had changed in all that time.

“I realised that even though children’s clothes were now easily available, there was still a serious dearth of superior quality footwear at reasonable prices. I was intrigued by the family conversations around manufacturing and export. I started researching on entrepreneurial opportunities in the clothing and footwear lines. Since we already had garment manufacturing under our belt, I proposed starting a footwear line that would provide mothers like me ample choices in high-quality footwear that was affordable, comfortable and in line with the latest design trends,” she says.

And thus, ﻿Kazarmax﻿ was launched as a passion project in November 2017.

With the family having industrial roots in Gurugram for three decades, it was Simran’s obvious city of choice for setting up a factory and warehouse.

Simran explains, “Every pair of Kazarmax shoe is ultra-lightweight, washable, anti-skid and is free from any animal product. The memory foam insoles in most of our shoes make them suitable for all-day wear. Kazarmax launched its accessories line six months ago with categories like socks, belts, and hairbands quickly becoming top sellers,” she says.

Its target audience is teenagers and young professionals who are looking for trendy and stylish athleisure footwear for everyday wear. Young parents, looking to buy comfortable footwear for themselves and their children, also form a big part of its customer base.

“Our parent-child and sibling twinning footwear are a big hit, and we would like to consider ourselves amongst the first to launch this concept in India,” she adds. In addition, Kazarmax is a PETA-certified brand with no animal product used in the manufacturing of its footwear.

Kazarmax’s revenue model is a direct business-to-customer (B2C) model. This, Simran believes, has eliminated the need for distributorship and has allowed it to pass on the price benefits to our customers. The marketplace model followed by most ecommerce platforms allows it to ship products directly to the customers.

According to Simran, Kazarmax footwear currently has a 97.8 percent share in the women’s open footwear in the Rs 600-900 category on Amazon. Kids ballerinas and sports shoes currently rank No. 1 and 2, respectively in their categories, and the brand has sold over four lakh pairs online.

Locally, Kazarmax counts on brands like Campus among its competitors because they have a large distribution model and a huge retail presence.

The business is self-funded, with an initial investment of approximately Rs 7 crore. Simran shares that for this fiscal year, Kazarmax’s revenue is forecasted to be between Rs 20-25 crore, having doubled its revenue every year since its inception.

“Sourcing of raw material has been among the biggest challenges we have faced. In an endeavour to support local, we had stopped importing various raw materials from China. Due to a lack of infrastructure, importing the same quality raw material became a challenge. However, over the last year, we have been able to tie up with Indian vendors that are not only equipped with the latest machinery, but are also producing far superior quality fabrics etc,” says Simran.

The earlier months of the COVID-19-induced lockdown saw a lot of Kazarmax’s factory labour being forced to head back to their villages. After the initial hiccups, Simran says that they were able to bring the brand’s manufacturing back on track.

“We have lots of exciting new collections lined up for the coming year. We plan to add new product lines in addition to the existing categories,” she says.