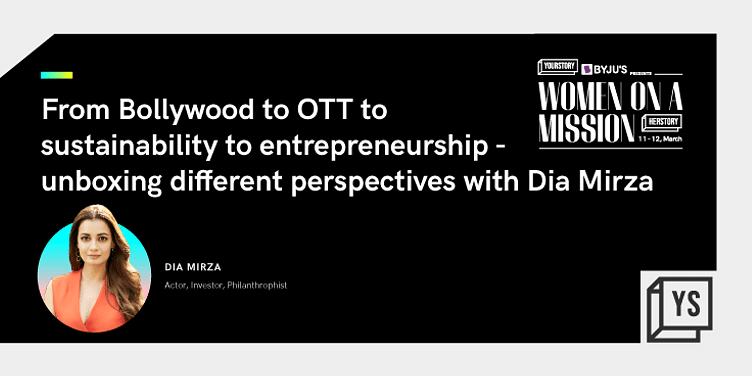 Dia Mirza, the recipient of the Women on a Mission 2022 Awards in the category of Art and Culture, keeps it refreshing, real and rooted when it comes to lessons in caring for the planet and bridging barriers in cultural entrepreneurship.

“I think one of the most empowering experiences for human beings is to have ways to discover that you cannot contain your own individuality and your (own) spirit into a box, you need to constantly flow and expand and learn and grow,” said Dia, speaking at HerStory’s Women on a Mission Summit 2022.

This year, the Women on a Mission Summit honours women leaders from diverse fields for their outstanding contribution to building a new India through the Women on A Mission 2022 Awards. Dia is one of the recipients of the awards, winning it in the category of Art and Culture.

From honing her own environmental consciousness to learning to care about the planet, Dia is passionate about life itself, something which has over the years “deepened” and “strengthened” her desire to act on climate change and leave a better world. A world free of pollution, a world that is a healthier and happier place.

“Understanding that there is a crisis, acknowledging the crisis and then asking ourselves, what is it that I can do every day to be a better citizen of my planet (is key). Because when we talk about inheritance for our children, we can’t talk about it in the future, it has to be in the ‘now’, in the present moment, because the air our children are breathing right now needs to be healthier, the water they're drinking right now needs to be cleaner, and the soil where we are growing food needs to be healthier,” explained the ardent green-planet advocate.

The solution should start at the basic level, beginning with rethinking our daily consumption patterns. Anything that's not good for the earth is not good for us. So, choosing to wear more sustainable clothing, choosing slow fashion over fast fashion, and not being “frivolous” in consumption is a good beginning.

“Buy less, use less, waste less. Eat more locally grown food. Practising a mostly plant-based diet or a vegetarian diet would make a big difference. So would refusing all single-use plastics. Carry your own metal bottle, wherever you go refill and reuse it. Carry your own handbag. Switch from regular toothbrushes to bamboo toothbrushes. And if you can, manage your waste at home through segregation and opt for home composting,” advised Dia.

Successfully transitioning from green-planet advocacy to reading through scientific reports and data, how does Dia look at her work as the UN Secretary-General's Advocate for SDGs?

“When I was appointed an ambassador for the SDGs a few years ago, it was terrifying because I was one of 17 advocates on the planet. And the SDGs are like the North Star, they are an incredible roadmap that we hope the world would adopt to be able to see the change that we need. But it can be very overwhelming, because up until now, all of my work, and my attention was focused on climate action and environmental consciousness. And suddenly, I was dealing with science and data and knowledge that I was receiving on all the other goals, which included gender equality and zero poverty,” she shared.

Dia said  that the comprehensive goals are meant for everyone, for individuals, industries as well as businesses.

“Goal 13, which is climate action, is the centrifugal force for all other goals, because if we don't achieve goal 13, none of the other goals are achievable. And I think the UN has appointed me to be their advocate because they understand that I get this. And that I can be a passionate communicator and advocate for it while I try to make the changes that I need to implement in my everyday life,” asserted Dia.

Of course, there are other goals that intersect. For instance, the overarching goal of gender equality.

Dia shared that at the time of getting married, one of her considerations was to think about ways to question patriarchal norms with dignity, respect and grace. “We managed to have a female priest perform our wedding rites. These choices are born out of the understanding of these goals,” says the actor who also refused to partake of the ritual of kanyadaan.

“If we want to promote sustainability, if we want a more sustainable world, we need to invest in sustainability. And both these companies, Beco and Shumee, are walking the sustainability path and doing it with absolute integrity. I was most attracted to Shumee because it's led by a woman. I think women are incredible. I think that they develop businesses with a lot of heart. And they really understand the nuance of what it is that they are nurturing, which is not just an enterprise, but an entire ecosystem, an ecosystem of consumption,” said an enthused Dia about investing in a compassionate model of consumption.

The multifaceted actor, who has been vocal about sexism in the film industry, made her OTT debut with the web series Kaafir in 2019 and appeared in the 2021 Netflix show Call My Agent: Bollywood. The producer (Born Free Entertainment) who believes that streaming platforms have democratised the consumption of content, hopes to leverage the power of filmmaking and storytelling to bring positive change.