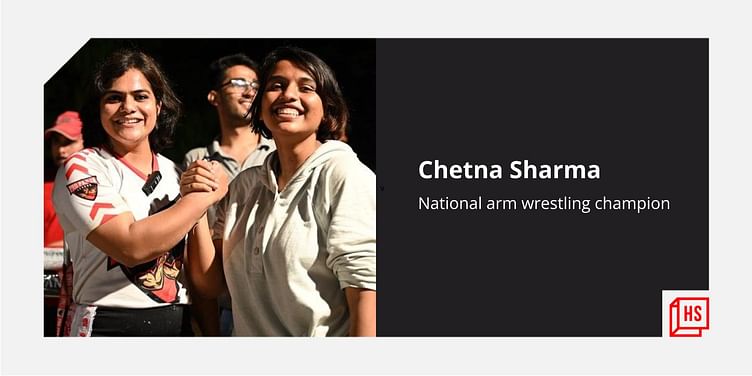 It isn’t everyone who takes up arm-wrestling as a career, but Chetna Sharma did. The national champion tells HerStory about starting out, balancing the sport with her work, and why she’s unable to go for international championships.

Growing up in a family of athletes, it was natural for Chetna Sharma to develop an interest in athletics.

The 31-year-old arm-wrestler from Guwahati, Assam, was an eight-time best athlete in her school. She tried and excelled at long jump, high jump, and running before stumbling upon arm-wrestling in her early 20s when her then-close-friend-now-husband Nayanjyoti Bora, who has been into arm-wrestling since childhood, pushed her to give it a try.

“I didn’t think it was an organised sport. He told me that I can participate but I laughed it off. One day he held my hand and said that I had got power so I must take part at least once. He started training me and in 2011, I participated in my first arm-wrestling competition,” Chetna tells HerStory.

More than a decade later, she has emerged as a champion in the Pro Panja League’s below 65 Kg women’s category when she was challenged in arm-wrestling bouts by four men and one female students at 'Aavhan' sports fest in IIT Mumbai.

Over 100 college students were invited to compete in a unique arm-wrestling competition to earn the chance to challenge six-time national champion Chetna and win a Rs 10,000 cash prize.

But she stood tall and proud and bested all her opponents.

Chetna did not have the proverbial beginner’s luck. She had to struggle for a few years to get her first victory - the  Assam state championship in September 2013.

“I kept losing from 2011 to 2013. I was getting injured again and again and wondered if I should stop but my husband kept pushing me. When I won my first state-level championship, I felt like I should continue. I was very petite and weighed around 50 kg. I trained for two and a half years before winning my first championship,” recalls Chetna, adding that the year she won her first championship is also when she became a national champion.

However, after becoming a national champion, Chetna paused her arm-wrestling for three years between 2014 and 2016 to focus on her master’s degree.

The reason was that she didn’t believe sports could be a career and decided to focus on education.

Chetna studied BCA from Punjab Technical University and MCA from Assam Engineering College. After she completed her master’s degree, she was recruited by the Assam Police in 2016. She has since then been working as a senior software consultant with the Special Branch Headquarters of the Assam Police,

“I completed my master’s in 2015, but I didn’t return to the sport until 2016 because I wanted to get a job before I returned to arm-wrestling. In March 2016, I got my job and in October there was the Sheru Classic championship in Mumbai where arm-wrestling was included for the first time. I won and that’s when I thought to myself that I’m ready to play nationals now,” Chetna remembers.

Since then, she has been working hard to balance the sport with her full-time job.

“At the office, I’m coding so it’s mostly brain work but when I come back home, I train and it’s more of bodywork. There’s a constant focus shift that I need to make and it’s difficult sometimes,” she says.

Chetna faced the “standard ridicule” when she started arm-wrestling despite her family being extremely supportive.

“It wasn’t common for girls to get into arm-wrestling a decade ago, and people would say also sorts of ridiculous things. But I took things positively and gained motivation rather than being bogged down,” she shares.

Over the years, the sport has grown exponentially, Chetna says, adding that social media has helped immensely in creating a buzz around women’s sports.

“Earlier, if women went out to play or if they won a championship, there would be a small column in the newspaper. But today, with social media, one can really reach out to people across the world. That has helped women’s sports gain attention.”

She added that a dedicated body like the Pro Panga League also helps the sport gain momentum among women.

National champion with no sponsors

Chetna was the national champion (right hand) in 2017 and 2018. In 2019, she won the National Championship in Chhattisgarh and Champion of Champions Miss India Arm Wrestling. In 2020, Chetna won gold in Pro Panja League at Thyagaraj Stadium in Delhi. She was a super match-winner in PPL 2021 that took place in Goa.

Despite becoming a national champion several times, Chetna continues to be an amateur player but she dreams of turning professional and playing in international championships.

She has been getting invitations to international championships since 2017 but a lack of sponsorships and financial aid from the government have kept her from accepting them.

She says arm-wrestling gets a lot of support in neighbouring states like Meghalaya and Manipur, but the scenario isn’t the same in Assam.

“I was recently invited for a championship in Uzbekistan, but I could not go without sponsorship by the Indian Arm Wrestling Federation or anyone else. I’ll have to put my own money, which I can’t do at the moment. I have a dream of participating in the Asian Arm-Wrestling Championship once in my life but I’ll do it at my own convenience, when I can pay for it,” Chetna says.