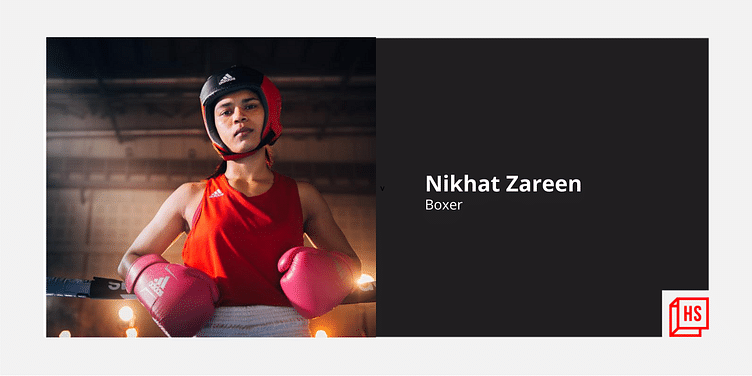 Nikhat Zareen may be known as the next Mary Kom, but the 26-year-old is determined to let her success in the ring speak for itself. She speaks to HerStory about winning, losing, and everything in between.

When boxer Nikhat Zareen was 13 years old, she and her father walked into a stadium where the Urban Games were going on. She watched some boxing bouts and innocently asked her father why there weren’t any women in the ring and wondered whether it was a sport only for boys.

Her father told her that there were women in boxing, but they were not encouraged much because women are generally considered to be weak, and there was the threat of physical injuries.

“The societal notion that women were weak and that they would face problems getting married if they took up boxing made me resolve to take up the sport,” she recalls.

A resident of Nizamabad district in Telangana, Nikhat was training to be an athlete, winning many competitions on the school circuit. Her father had left his job in Saudi Arabia to train Nikhat as she did not have access to a coach or facilities in her town. An aspiring sportsperson in his youth, her father was determined that his daughter realise every dream of hers.

From athletics to boxing

That single visit to the Urban Games changed her trajectory - in sport and in life.

But initially, her foray into boxing was riddled with challenges.

“I was the first girl from my district to train to become a boxer. I was training with the boys, being beaten by them.

"Suddenly everyone’s eyes were on me – my relatives, my father’s friends questioned him as to why he was allowing me to become a boxer and get beaten up and injured in the ring. According to them, I should just get a job under the sports quota. Also, who would marry me later in life,” she says.

There were also questions from the community.

“I was told a Muslim woman should be in purdah and asked how I could wear short clothes. Thankfully, my father did not let these comments affect him or me. He asked me to focus on boxing and work hard. When I won medals, the same people would come back asking for photos and selfies,” she adds.

Within a year of entering the sport, in 2010, Nikhat won the gold at the Junior Nationals and was selected for the World Championships in 2011. She won the gold in the flyweight division at the AIBA Women’s Junior and Youth World Boxing Championship in Turkey. Nikhat was up against home favourite Turkish boxer Ulku Demir.

Every win is an exhilarating moment for Nikhat.

“It’s a high to see the Indian flag flying high and the National Anthem being played as I climb to the podium,” she says.

Nikhat is often compared to the legendary boxer and Olympic medalist Mary Kom. Has it been difficult to get out of her shadow?

She clarifies, “Mary Kom usually competes in the 48-division category while mine is flyweight. Because of Olympic rules, she must compete in the flyweight category. I have had the opportunity to meet her and face her in the trials. She is a huge inspiration. I have learnt from my mistakes and moved on. I am now looking forward to Paris 2024.”

In 2017, Nikhat dislocated her shoulder and could not train for a year.

“I was not ready for such a big injury and was missing my training. But this phase taught me to be mentally strong. My psychologist urged me to look at the positive side. She told me to visualise what I wanted to achieve – standing on the podium and receiving an Olympic medal. I believe that you become what you think,” she says.

During the lockdown, with no recourse to professional training, Nikhat sought help from Welspun Super Sport Women Program (WSSW), which helped her train for the National Championships and the World Championships. She is grateful for the organisation’s support, during the difficult time.

Currently, her focus is on winning the world championships in May and then onwards to Paris 2024.

“I am taking my life, and sport, one step at a time,” Nikhat says.