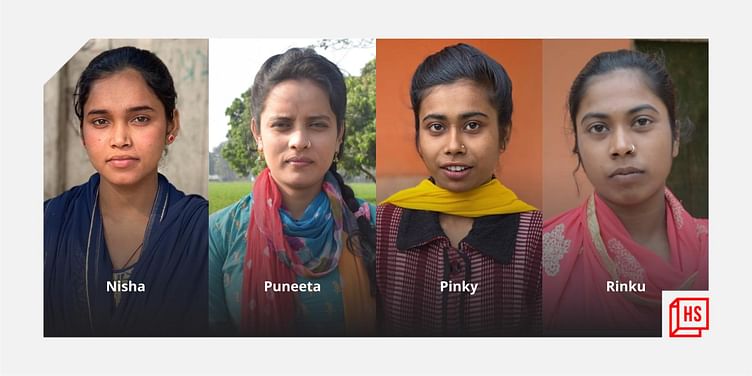 Paying no heed to criticism, Pinky, Rinku, Nisha, and Puneeta are working to empower girls and women in Uttar Pradesh’s Kushinagar district. They have started school enrolment drives and self-help groups, and are creating awareness about rights and necessities.

Twenty-year-old Pinky was just about done with her studies and household chores when she heard a sudden, unexpectedly loud knock. A few villagers were at the door, to tell her about a child marriage taking place nearby.

Losing no time, Pinky rushed to the ‘scene of the crime’ along with her crew, including her sisters Nisha and Rinku, and did what most women in rural areas wouldn’t dare do—raise a voice.

Unlike in the movies, it takes more than courage to stop unfair practices that have been prevalent in our society since time immemorial. The girls’ fierce intervention was not taken well by most people; they were reprimanded, followed by intimidation and threats.

The girls first took the subtle route, explaining the consequences of child marriage. But, when she failed to make headway, Pinky took pictures for evidence, gathered support from the Sarpanch and senior members, and dialled 100.

This story is an attempt to highlight and celebrate girls like Pinky, who have everything to lose but continue to show courage, try and better life for themselves and other girls, and selflessly help people around them.

YourStory interacted with four brave girls—Pinky, Rinku, Nisha, and Puneeta—from Kushinagar district in Uttar Pradesh, with an aim to bring their stories to the centre stage, and hopefully inspire more people.

“People who earlier used to threaten us are now intimidated by us because we refused to bow down. Almost everyone tried to threaten us and our families initially; they pointed fingers at our character and refused to acknowledge us. But we all came together to fight this mindset. Now, they come to us to get things done in the village, starting from school enrolment to civic issues,” Puneeta says.

“Abb bilkul darr nahi lagta (We are no more afraid to raise our voice),” she adds.

Puneeta, 21, is pursuing a bachelor’s degree in arts (BA) from a local college, and resides in Shahpur Khalwa Patti village in Kushinagar district.

Fighting child marriage, a practice rooted in gender inequality, was just another day at work for this girl gang, which joined a Sanghatan (self-help group) when aged 10-11 years old.

Self-Help Groups (SHGs) in villages are groups run by women who help each other by creating a small pool of savings among themselves. This money can be used by one or more group members for setting up some business. They empower each other and take measures to improve local women's health, environment, education and so on.

“The only option for girls here is to get married at an early age. It is an escape route for many to not work in the fields all day. This needs to change, and courage along with education is the only way out,” says Pinky, who is pursuing her BA from a local college, and resides in Mishroli village.

For the last 10 years, the girls have self-taught themselves and also been trained in various activities such as stitching, kitchen gardening, compost making, and so on through these groups.

They now take stitching classes after their college, and help local women grow their own kitchen gardens.

“This is now being done at a larger scale by women in nearby villages. Our aim is to make them self-sustainable. Some of the women in our village are selling vegetables locally, doing stitching, teaching crafts, and so on,” Pinky says.

“Many men suffer from alcohol addiction and have a horrifying impact on their families. Empowering ourselves, being united, and learning the value of education is our only escape route. We need to take charge and teach responsibility to men,” says Nisha, who also resides in Shahpur Khalwa Patti village along with Puneeta, and is in her second year of BA.

The group also takes charge of different activities in their villages, including checks on the availability of basic civic amenities, raising concerns regarding the quality of mid-day meals or delays in availability of subsidies under various programmes, tree plantation and cleanliness drives, and small seminars on women’s hygiene and social issues.

They also provide free tuition to school dropouts to catch up with their curriculum, and make sanitary napkins for village girls to reduce the economic burden of menstrual hygiene and improve safety and hygiene.

Dropping out of school is common in rural India and the pandemic has worsened the situation. The majority of village girls dropped out, citing household chores and sibling care as the primary reasons.

The girls decided to start a school enrolment campaign with the help of their group, going door-to-door to convince parents to send their daughters to school. They managed to get about 80-50 children enrolled in a span of a few months, and continue to do so, actively.

The girls rallied support with local opinion leaders and campaigned to increase awareness about education in their villages.

“We get children enrolled in schools and help dropouts catch up. If they’re facing any admission-related issues we talk to their parents and teachers to solve it. This is also done through the School Chalo Abhiyan,” says 17-year-old Rinku, a student of Class 12.

The campaign has sensitised 1,500 families across 10 villages and contributed to the enrolment of 166 children in school.

In 2020, the girls were approached by People Powered Digital Narratives (PPDN), a social impact group that works with non-profits like Praxis UK. These young girls were trained to use their mobile phones to record their stories, interview each other and anchor, with the help of creator economy platform, Pluc.TV. These stories and documentaries are promoted on PPDN’s social media community #HerAkshar and various other platforms.

“The girls’ stories were earlier limited to their villages, Mishroli and Shahpur Khalwa Patti, only. Through storytelling, they have been able to inspire more girls and young people like them in different parts of the country to look at education and equality differently,” says Tamseel Hussain, Founder and CEO, Pluc.TV.

The girls continue to make videos after being trained, and even self shot a documentary ‘Girls on a Mission’, that was released in 2021. The documentary won Silver at the prestigious WAN-IFRA South Asian Awards for the Best Use of Online Video.

“We do not aim to be in big cities. Our aim is to empower girls to be educated, be self-sustainable, speak up for their rights, have a source of income, be fearless, and be treated with respect,” they say.