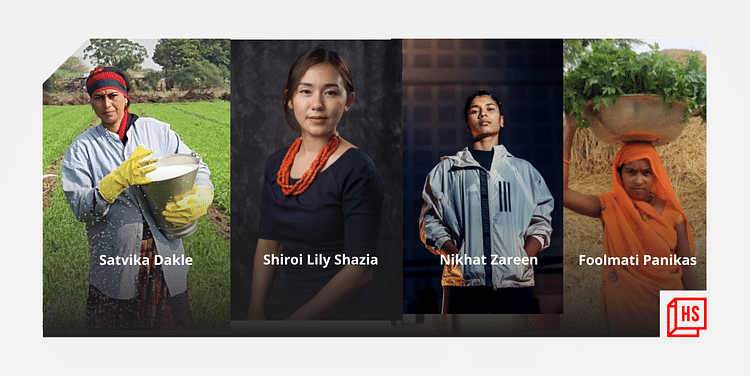 From creating a community of one million women farmers to entering the boxing rings and democratising education for children in non-metro cities, these women are taking matters into their hands to bring change.

In rural India where patriarchy often poses more gender-related challenges than in urban areas, women are finding the strength to change the narrative.

As with all changes, many have begun with steps as small as taking boxing class or being part of certain meetings and went on to inspire women in their community.

HerStory presents stories of four women from remote areas of India who have followed their gut, worked towards their passion, and left behind a trail of inspiration in its wake.

Foolmati Panikas is a farmer in Godbahra, a small village in Singrauli district of Madhya Pradesh. Not long ago, eating two meals in a day was a luxury in the village. Besides farming, the villagers often travelled to distant places to work as manual labour.

After a workshop on agricultural entrepreneurship by PRADAN, Foolmati embarked on her entrepreneurial journey with the idea of a centralised vegetable nursery.

The nursery was then ready with 25,000 lush green saplings in a few months. Her service helped change the prospect of vegetable cultivation in Godbahra and soon started offering the service in five neighbouring villages as well.

Women being stereotyped as weak and fragile for rough sports like boxing did not sit well with Nikhat Zareen as a 13-year-old girl in awe of boxing.

Hailing from Nizamabad district in Telangana, she later pursued her dream as a boxer with the support of her father, despite relatives and family friends frowning upon the choice for donning short clothes in the ring.

Today, the 26-year-old is an inspiration to women in her community and across India with many laurels to her name.

In 2010, Nikhat won the gold at the Junior Nationals and was selected for the World Championships in 2011. She won the gold in the flyweight division at the AIBA Women’s Junior and Youth World Boxing Championship in Turkey.

In the northeastern state which sees relatively lesser startups and even fewer funding Investments, Shiroi's startup bagged the first foreign investment when it raised a pre-seed round earlier this month.

It offers centralised content distribution across a digital school network to regulate quality and provide regular content updates in sync with NBSE/CBSE. Along with her co-founder Kevisato Sanyu, the goal is to create proper access to education online and enable the learners to catch up with students across India.

Before becoming an entrepreneur, Shiroi worked for a community and livelihoods programme at an NGO in Kohima. A farmer she knew then later shared his plans to move from his village to Kohima to provide better education for his four children.

Shiroi and her partner helped him secure a loan and get a car to run as a taxi; but he was soon murdered over the taxi.

In 2020, the duo launched NagaEd to ensure access to education without having to migrate to cities or outside their home state.  The platform also empowers teachers by equipping them with modern and digital skills that were needed especially during the pandemic.

As an indigenous tribal woman, the land and community that we come from is very close to our hearts: Nagaed Co-founder Shiroi Lily Shazai

Growing up in Aurangabad, Savita Dakle never imagined earning a living as a farmer, let alone build a community of over one million women farmers across India – over two Facebook groups. But her life as a farmer began after her marriage at the age of 17. She learnt to toil the soil, sow seeds, harvest the crop and her gratitude towards the land is visible in her social media updates.

From dropping out in Class 10 to bringing one million Indian women farmers together on Facebook, the story of Savita Dakle

The thirty-six-year-old began working as a labour with her in-laws, earning Rs 200 per hour, and found interest in Seva Samta where women gathered to discuss the best practices and challenges of working in the field.

As a member of Seva Samta and armed with a working knowledge of using phones and social media, Savita created a Facebook group, taught about women in her village to participate in discussions on Facebook, and the network grew far and wide across the country.

The community now discusses everything related to farming, from tips and tricks of sowing and harvesting different types of crops to pricing them in the market. Savita says she learnt how the world works by stepping out, insisting to accompany her husband everywhere and now women in Pendagaon village in Maharashtra find inspiration in Savita as she runs errands, pays the bills, and takes charge of her own life.