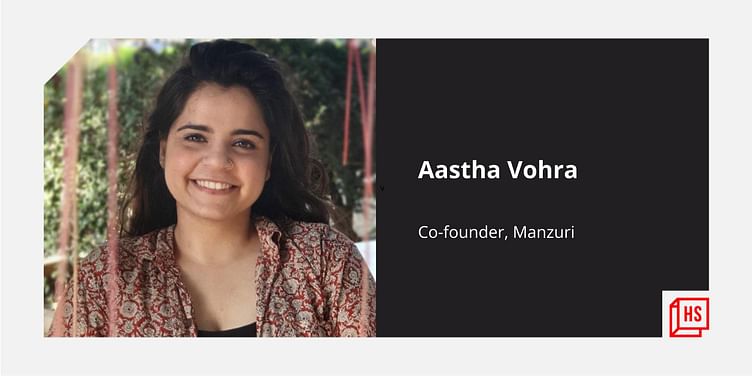 Aastha Vohra spent 22 years of her life with little sexual knowledge. When she moved cities for education, empowering conversations led to her sexual liberation and the launch of Manzuri, a sexual wellness platform that sells adult toys and offers sex education.

Aastha, 22 years old at the time, didn’t know that “such a thing even existed”.

“My friend told me it was being sold as a face massager on Amazon. She swore by it and convinced me to buy one for myself as well. It allowed me to gain control over my own sexual pleasure. Being in a cosmopolitan and unfiltered environment, away from the protected layer of my own family, allowed me to have open-minded discussions on everything under the sun. Sexual wellness and pleasure was also a big part of this,” Aastha tells HerStory in a candid conversation.

Derived from a Japanese word that translates to ‘a thousand rubs’ and roughly translates to consent in Hindi, Aastha co-founded ﻿Manzuri﻿ with her best friend Ritesh D Ritelin in 2020 when she saw how “tabooed the pleasure gap is”.

From more women taking charge of their pleasure to Tier III penetration: Charting IMBesharam’s growth in the last decade

Growing up in a typical middle-class patriarchal Punjabi family, Aastha says she was under a protective layer and not exposed to deeper conversations.

“Left to depend on no one but myself, I felt a disconnect between the person I felt I was meant to be vs the person I was brought up to be. My college served as the perfect liberal and cosmopolitan platform (as all of them do!) to catalyse this change. I found my passion not in academics and public policy, my major, but rather in exploring gender inequality and the myriad ways it impacts our ability, no matter the gender, to be truly authentic to ourselves,” Aastha shares.

Her sexual liberation became the key to her own journey along this path as she started to explore her own body and gain confidence sexually (with partners at times or by myself). “I found myself taking charge of my life, personally and professionally, in smaller aspects as well as the bigger picture,” she says.

However, exploring entrepreneurship in the sexual wellness space is bound to have several specific challenges. The initial challenge was to open up to her own family and she did it gradually.

Aastha recollects, “The first six to eight months that I had started Manzuri, I was running it along with a full-time job. So, I did not tell my family about it. When I decided that I wanted to pursue Manzuri full time, I started out by sharing the Instagram account focused on spreading information, education, and awareness. We slowly reached a point where I was able to share everything about what we do at Manzuri. Today, I’m so happy that not only does my family appreciate my work; it also supports it.”

She does face a lot of resistance from society for her work in the sexual wellness space, but believes it to be "mere reflections of our society and its conservative culture".

“When you set out to tackle tabooed issues, there is tremendous unlearning that you need to do before you can re-learn the very fundamentals free of any bias or prejudice. Take virginity, for instance, the breaking of the hymen for a vulva-owner is associated with losing their virginity whereas the fact is that the hymen - much like any other muscle in our body - will break when stretched and repair itself in time. We need to unlearn the understanding of virginity as a social construct only to re-learn it as a fact that has no impact on your sexual performance, health, or even ability to bear a child,” she explains.

And then there are the unending questions.

"Why are you wearing such short clothes?"

"Why do you run a company that sells sex toys? Is this the only thing that you do?"

"Will you continue running this business after you get married?"

"You've done your master's and you're still doing this?"

“I do believe as women we get asked a lot of questions, regardless of who we are, what we do, and where we come from. While my gender informs me about the very valuable experiences and struggles of women and vulva-owners, and in turn fuels me to do what I do every single day, I do not view my journey as an entrepreneur with a gendered lens,” Aastha says.

While India is ranked the sixth most sexually-active country in the entire world, people still consider sex a taboo and refrain from discussing it openly.

But sales of adult toys have gone up in the last decade.

In India, sales of adult toys have gone up - and more women are buying.

An IMbesharam survey data shows that the percentage of females among its customers has increased from 20 percent to 39 percent in the last three years. Its order totals from women too have gone up - from 18 percent to 44 percent during the same period.

Manzuri spreads sexual awareness and education to young adults and new parents through social media, blogs, and online workshops in order to bridge the pleasure gap in the country.

“We also plan to launch our own sex ed courses eventually and are already in the process of developing an exhaustive curriculum with some of the top gynaecologists and doctors in the space. Our Instagram handle @get_cliterate has already gained decent momentum and is 100 percent a sex education-focused handle,” Aastha says.

“Our educational courses will play a big role in bridging the sex ed (and orgasm) gap in the country.”

“Someone DMing and telling us how they got out of an abusive relationship because of a blog that we wrote…these things keep us going, but we're just getting started and it's too early to be proud or content with anything we've done. The only thing we know is - we're on the right track.”

Manzuri has sold over 10,000 adult toys so far with Rabbits and Bullet being the most loved. Aastha claims that their average per order cost is Rs 2,800. Since they started the online adult toy shop, Manzuri has had approximately 3,500+ men, 5,000+ women and 600 queer customers.

But Aastha says Manzuri aims to be a one-stop spot for vulva owners and queer folks across the country to come and talk about sex, kinks, pleasure and everything related to sexual wellness under the sun.