The Ghee Roast Girl: how this chef is putting Mangalurean cuisine on the culinary map 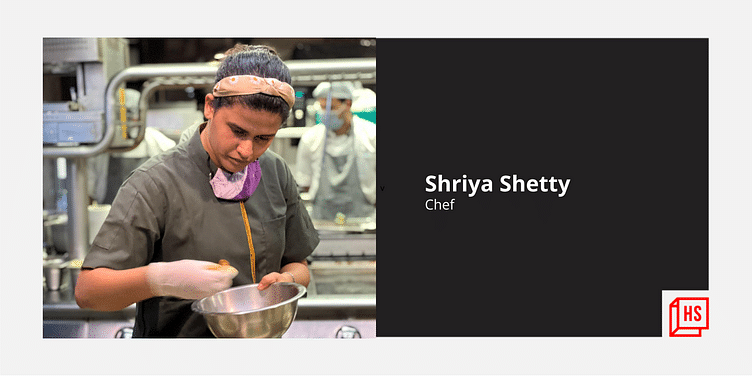 Mangaluru -based chef Shriya Shetty is giving traditional Mangalurean cuisine a new avatar without changing the foundations of traditional recipes.

Ghee roast to the Konkan coast is what butter chicken is to north of India. A staple meat dish, chicken coated with an aromatic masala is slow-cooked in ghee for a rich and classy flavour.

Today ghee roast has been adapted to include many variants - mutton, seafood, mushroom, and even a vegetarian version. Helping food enthusiasts perfect this recipe for the last six years is 28-year-old chef and entrepreneur Shriya Shetty, earning her the tag of the ‘Ghee Roast Girl’.

The Mumbaikar, who now calls the coastal city of Mangaluru home, is giving traditional Mangalurean cuisine a new avatar without changing the foundations of traditional recipes.

“For me, traditional recipes are sacrosanct. But, by pairing these traditional recipes, you can bring out unique flavours,” she says. Her signature dishes like Chakuli Gassi, Chakuli with Pineapple Mensakai, Biscoot roti, Lavancha (vetiver) smoked mutton, chicken Sukkha, among others are a testimony to that culinary art."

These dishes are quite a hit and make it to the curated pop-ups that are hosted across different cities - from Mumbai to Chennai to Kolkata. Her pop-ups have attracted food aficionados and celebrities like Deepika Padukone. She has also cooked a number of times for the Kapoors where she put together a unique range of Mangalorean dishes as part of the menu.

The dishes have been a result of her ongoing research on traditional Mangalurean cuisine where she learns from those who know best - the grandmothers. She says, “I am a bunt and I grew up eating Mangalurean food. And, that was the definition of Mangalurean cuisine for me. It's only much later that I discovered how each community in Mangalore owns extensive regional recipes, each bringing out a distinct flavour and experience.”

She describes the cuisine as the ‘backyard cuisine’.

“Most ingredients traditionally came from people’s backyard - from timare (Brahmi) chutney to mango-based dishes. It is sustainable in every sense of the word - based on what was available locally and as per the season,” says Shriya, adding, “When I send in the ingredient list for my pop-ups, I invariably get a call back on how I missed mentioning tomato in the ingredient list. But, the fact is, traditionally Mangalurean cuisine used souring agents available locally - from Bimbuli (tree sorrel) to Vaate Huli (lakoocha). Tomatoes are a recent introduction that’s why traditional Mangalurean recipes don’t have them.”

Slow cooking is another feature of a lot of the coastal recipes, she notes. “For instance, my signature Ghee Roast is often the first to go on the burner and the last to come out. It takes hours of slow cooking. If someone asks for a quick version of the recipe, I don’t have one,” says Shriya.

Exploring traditional recipes and ingredients and translating them into dishes is just one part of what Shriya does. She is also an entrepreneur. She is the founder and executive chef at BuCo, the artisan bakery and patisserie. BuCo offers pastries, artisanal bread, sandwiches and desserts - something that is still hard to find in the city.

Pupkins Hospitality, a venture she founded with her partner and now husband, Varun Shetty, is the F&B partner of Avatar - a boutique lifestyle hotel located in the heart of Mangaluru. At Pupkins Hospitality, she dons the hat of a culinary curator and plays a key role in leading its operations - from planning the menu, training the team to running the kitchen.

Shriya’s journey to rediscovering Mangaluru's culinary traditions began with falling in love with baking, the hot kitchens, moving countries and back.

However, if there was one thing that remained constant in this journey was her love for food.

Growing up in Mumbai, Shriya’s childhood always revolved around food.

“When we had family and friends over, the focal point was always food. As a family, we would sit together and decide what could be served. It would be an elaborate discussion where we would curate the menu based on who we were hosting. If it were the grandparents, we would stick to traditional recipes; if we had cousins over, we would experiment with dishes that were then not a norm like crepes and canapes. If we had non-Mangalureans over, we would serve traditional coastal dishes,” shares Shriya. Even during family vacations, popular tourist spots were skipped in lieu of famous local joints and eateries.

Her love for baking began when she attended a workshop during her summer vacation. Soon, she began baking for family and friends. When an acquaintance asked Shriya to take a paid order for cupcakes for her son’s birthday, Shriya realised she could earn her own pocket money. “That’s how we started Pupkins Kitchen. The name is a play on the names that her father called Shriya and her sister. I dedicated Pupkins to him and his love for food,” she says. Pupkins Kitchen continued to grow as a home-run bakery with a constant influx of orders and even media mentions.

Becoming a chef was never on the cards. “It feels hilarious now that it never struck me that I could become one,” Shriya says.

“At different times, I had different aspirations - from a fashion designer to an architect. But, the end goal was the same - earn lots of money and open my own restaurant.”

It was during her third year of college while pursuing her Bachelor of Commerce when Shriya’s friend who knew her passion for baking asked if she wanted to intern in a commercial kitchen to better evaluate the possibilities of pursuing a career in culinary arts. “At Mumbai’s Peninsula Grand, I had my first brush with a commercial kitchen. And, I was head over heels in love with the kitchen even though all I got to do was clean up the kitchen. I realised if I enjoyed just the cleaning so much, I would give it more than my all for a career in the kitchen,” she says.

Deciding to work in a commercial kitchen and learn everything hands-on instead of taking the academic route, Shriya began applying for internships at some of the best restaurants and hotels in Mumbai that had a bakery division. “I was well aware of the fact that it would be hard to get a breakthrough given that I didn’t have the necessary academic credentials. But, I was determined to make it,” she adds with a laugh.

“At that time, Chef Kelvin Cheung was making huge waves in Mumbai’s celeb-favourite restaurant Bastian. Wanting to learn from the best, I sent over 15 emails, something I don’t recommend anyone to do. But, luckily, Chef Kelvin saw my emails and asked me to meet him. I had taken with me some of the media mentions of Pupkins to substantiate my passion for baking. But, he never even looked at it. All he wanted to know was why I wanted to intern,” recalls Shriya. Chef Kelvin went on to become one of her biggest mentors.

The internship at Bastian was a significant milestone in Shriya’s journey to becoming a chef. In two months, the internship translated into a job offer. It was here that she got to see the hot kitchen in action up close. Wanting to be a part of it, Shriya began doing double shifts. She would work in the hot kitchen after she finished working in the bakery. “Hot kitchens aren’t for women,” - something she heard quite often in the kitchen and beyond. But, that only made her all the more determined.

A new goal, a new mission

Working for commercial kitchens and bakeries at some of Mumbai’s best saw Shriya harbour a dream. She wanted to explore the possibility of studying culinary arts at some of the best institutes.

“ Even with scholarships, the fees felt exorbitant for someone from a middle-class household,” she says, adding, “On one hand, I had a partial scholarship at the International Culinary Center (ICC) and on the other, I had a six-month internship at Gaggan Anand, which was then counted among Asia’s best restaurants. I opted for the latter.” It was here, when she moved out of the country, that Shriya unearthed the desire to rediscover her culture and culinary heritage.

“Looking around, I realised that the cuisines that people can cook best are from the cultures they belong to. You could be making the best pasta but still, there’s a reason why people want to go to Italy and enjoy pasta from a chef who grew up eating and making it. That’s when it hit me that I might be a good chef and can master different cuisines, but the one I would make the best was the one I grew up eating and that was Mangalurean cuisine for me,” says Shriya.

Deciding to return to India, she set herself a deadline of 10 years by when she would move to Mangaluru to deep-dive into its vast culinary traditions and recipes. But, as luck would have it, there was a restaurant in the city that was looking out for new management, Shriya and Varun signed up for it. The project didn’t take off well but that provided the stage for Pupkins Kitchen to take shape yet again.

“At that time, the city didn’t have many options when it came to artisanal bakeries. So we rented a vintage house and converted a part of it into a bakery. The other half was a space dedicated to workshops - because I loved teaching,” shares Shriya.

In 2020, Pupkins transitioned into a bigger venture - Buttercream Co.

Exploring the coastal culinary traditions of Manguluru and translating them into fine-dining dishes, Shriya says if there’s one thing she has realised is that there is much more to the Mangalurean cuisine beyond the popular neer doses, kori roti or pork bafat. “ We have a number of communities, each of which has its style of preparing dishes. We have the Mogaveeras, the Gaud Saraswat Brahmins, Beary (Byari) and so on. For instance, the way the Mogaveeras make seafood, no one else can. It’s time to honour each of these hyperlocal dishes, their culinary traditions, and keep them alive,” she adds.