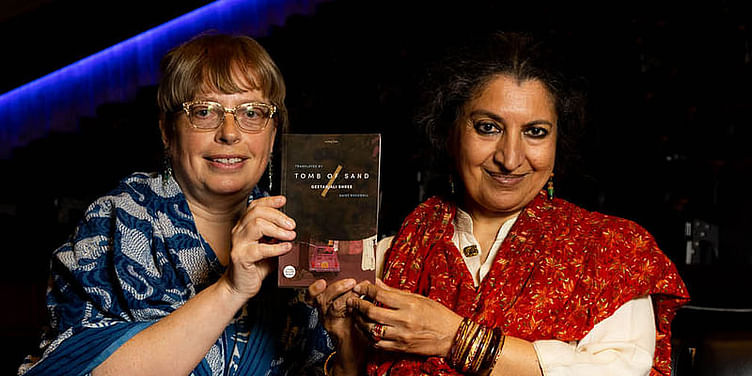 The 64-year-old author said that she represents a language and culture, and this recognition brings the entire world of Hindi literature, in particular the Indian literature as a whole, into larger purview.

Author Geetanjali’s book Tomb of Sand has bagged the prestigious International Booker Prize this year, making it the first book orginally written in Hindi or any Indian language to win the title.

Originally written in Hindi and titled Ret Samadhi, it was translated into English by Vermont, US-based painter, writer, and translator Daisy Rockwell.

The 64-year-old author said that she represents a language and culture and the recognition brings the entire world of Hindi literature in particular, and Indian literature as a ,whole into larger purview.

"I never dreamt of the Booker, I never thought I could. What a huge recognition, I’m amazed, delighted, honoured, and humbled," Geetanjali said during her acceptance speech at the award function held in London on Thursday.

“But behind me and this book lies a rich and flourishing literary tradition in Hindi and in other South Asian languages. World literature will be richer for knowing some of the finest writers in these languages. The vocabulary of life will increase from such an interaction,” she said, as reported by Press Trust of India.

The novel follows an 80-year-old woman called Ma in northern India who overcomes depression after the death of her husband, and insists on travelling to Pakistan decades after the brutal partition of the two countries.

As she confronts unresolved trauma of her teenage experiences of Partition, Ma re-evaluates her identities as a mother, a daughter, a woman, and a feminist.

Despite traversing through one of the most painful moments in Indian history, the jury of the Booker Prize noted how the book has turned out to be "engaging, funny, and utterly original, and at the same time an urgent and timely protest against the destructive impact of borders and boundaries--whether between religions, countries, or genders.”

“This is a luminous novel of India and partition, but one whose spellbinding brio and fierce compassion weaves youth and age, male and female, family and nation into a kaleidoscopic whole,” remarked Frank Wynne, Irish literary translator and chair of the judges at the International Booker Prize this year.

Born in Mainpuri, Uttar Pradesh, in 1957, Geetanjali has authored three novels and has several story collections. Her work has been translated into English, French, German, Serbian, and Korean. Now based in New Delhi, Ret Samadhi/Tomb of Sand is her first book published in the UK.

(Disclaimer: The story has been updated citing PTI as the source for Geetanjali Shree's acceptance speech.)