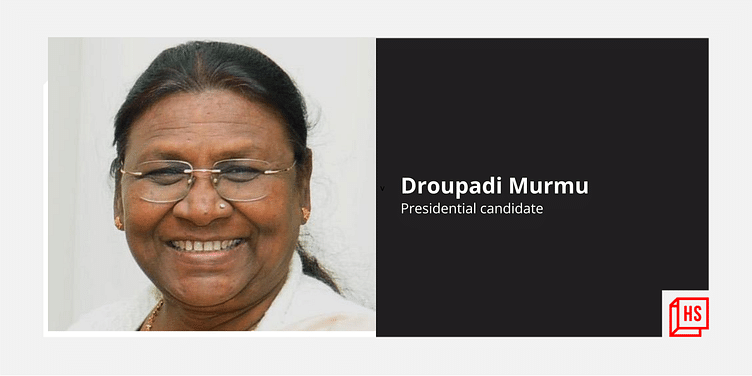 The BJP-led NDA has named Droupadi Murmu, a tribal leader from Odisha and erstwhile governor of Jharkhand, as its Presidential candidate.

On Tuesday, the BJP-led NDA named Droupadi Murmu, a tribal leader from Odisha and erstwhile governor of Jharkhand, as its Presidential candidate to replace outgoing President Ram Nath Kovind.

BJP president JP Nadda announced her name at a press conference following a meeting of the party's parliamentary board, which included Prime Minister Narendra Modi and other senior leaders.

Smt. Droupadi Murmu Ji has devoted her life to serving society and empowering the poor, downtrodden as well as the marginalised. She has rich administrative experience and had an outstanding gubernatorial tenure. I am confident she will be a great President of our nation.

Today @BJP4India announces the name of Smt. Droupadi Murmu as our candidate for President of India.

With guidance from @PMOIndia @narendramodi, preference is given to a #tribal, a #woman from the beautiful state of Odisha. for the first tribal President for #IndiaAt75.

Sixty-four-year-old Droupadi will be up against joint Opposition candidate Yashwant Sinha, ex-IAS officer and former minister. The poll is slated to be held on July 18.

The BJP enjoys a vote value of 10.86 lakh in the electoral college, lacking nearly two percent of votes for a majority.

Here are eight things to know about the NDA’s presidential candidate.

1.    Droupadi was born in Mayurbhanj in Odisha. She completed her graduation from Rama Devi Women’s College in Bhubhaneshwar. She worked as an assistant professor at Shri Aurobindo Integral Education and Research. She also had a stint in the public sector as a junior assistant in the irrigation department of the Odisha government.

2.   She joined the BJP in 1997. She served as Councillor in the Rairangpur Panchayat and as Vice President in the BJP’s Scheduled Tribes Morcha.

3.    Since then, she has been elected as a Member of the Legislative Assembly (MLA) twice from Rairangpur in Mayurbhanj.

4.   Droupadi was Minister of State (independent charge) in the BJP-BJD coalition government. She held the commerce and transport portfolio, following which she headed the fisheries and animal resources development ministry.

5.   In 2015, she was appointed the Governor of Jharkhand, and was the first to complete five years in office.

6.   She was conferred Nilkantha award for best MLA by Odisha Legislative Assembly in 2007.

7.    Draupadi was married to Shyam Charan Murmu. She had two sons; and according to news reports, one died in mysterious circumstances and the other in a road accident. Her daughter Itishri is married and settled in Bhubaneshwar.

8.   If elected, Droupadi will become the first Indian President to be born after independence.