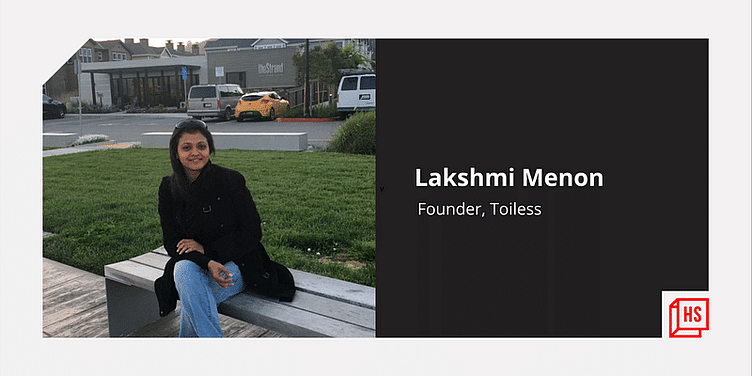 Started by social entrepreneur Lakshmi Menon, Toiless is an initiative to ease the woes of women travellers across Kerala by offering them access to clean washrooms.

In August 2021, social entrepreneur Lakshmi Menon decided to embark on a road trip from Kochi to Kasargod (265 km) to spread awareness on responsible conscious consumerism, in the light of many small businesses shutting down during the pandemic.

“There were so many cases of people taking their own lives because their small businesses failed. A large part of the population had started making all purchases online and this affected the local business community and impacted their livelihoods. It was imperative that people started buying from small traders again,” she tells HerStory.

Lakshmi is the social entrepreneur behind Ammoommathiri, that sells cotton wicks made by impoverished senior citizens, the famed Chekutty rag doll that was the symbol of the floods that lashed Kerala in 2018, CoVeed initiative that encouraged people to contribute grocery-hit families and Shaaya, a project that made mattresses out of PPE waste for COVID care.

She called the trip Traveli, after the demon God Maveli, a part of Kerala mythology and who Keralites believe makes a trip to the city every year during the Onam festival.

During that time, Lakshmi linked her trip to different rooms on the app Clubhouse where she interacted extensively with listeners who guided her on what to eat, where to stay, and which place to visit along the way. These interactions, she says, enriched the experience.

But the road trip also presented a challenge, which women have been facing forever.

“When I embarked on the road trip, I was not prepared for abject lack of clean toilets along the route. Earlier, one stopped at known restaurants, at friends’ or relatives’ places, but this was not possible because of the pandemic,” she says.

Lakshmi had to cut her five-day trip shot and return to Kochi. It also led to the start of her new initiative, ﻿Toiless﻿, a project that aims to minimize the ‘toil’ women endure in dirty toilets.

The idea is simple. The projects hope to tie up with hotels, restaurants, boutiques, wedding halls and other places to facilitate ‘pay and use’ clean toilets for women travellers across Kerala. In short, there was no necessity to build new toilets for travellers, but to make use of existing ones, especially in places like wedding halls, which remain empty half the year around.

Any person owning one or more of these places can become a ‘Travel Ally’ with Toiless. All they must do is adhere to certain specifications.

“The rest room floors must be dry, there must be a health faucet (bidet), tissue paper, hooks to place a dupatta or a bag, a trash bin with a lid, a small wrap to place mobile and keys and if possible a mirror,” Lakshmi explains.

The Travel Ally can add more features according to his conveniences. A minimum of Rs 50 can be charged for a single use.

Now, the issue was how to onboard these Travel Allies and direct women travellers to the restrooms.

“We needed to develop an app, but I was quoted around Rs 10 lakh. During one of the Clubhouse sessions, a Malayali techie from Qatar offered to develop a web app that will help travellers locate clean toilets on their route,” she says.

She believes Toiless will go beyond just clean toilets to become a powerful marketing and branding initiative.

She elaborates, “When a woman visits a furniture shop, a boutique, a restaurant, or other commercial places, they might browse around that, in turn, will contribute to brand identity, recognition, and higher walk-in conversion. All these are apart from the social media traffic generated and the money they receive for the use of toilets. Also, enterprising youngsters can lease a small portion of these places and set up businesses providing car accessories, women’s and children’s accessories and maybe even a small café.”

While Toiless is offered to both men and women, Lakshmi says, “it’s guaranteed only for women”.

The recent Kerala Travel mart conference has provided an impetus for the Toiless initiative.

“Finding clean toilets is a major challenge for tour guides in the travel industry. I was told that before the start of every trip, four clean toilets are identified and the itinerary planned around that,” she says.

Toiless has onboarded more than 20 Travel Allies so far, but with Lakshmi being the lone person behind the project, where she sometimes must visit the place physically to inspect it, she hopes more traction on social media will lead more allies and women to the cause.

Enter Gomathy, the cute mascot for Toiless. She teaches etiquette and how one needs to have empathy for the person cleaning and maintaining the toilets.

“We have posters of Gomathy at every Travel Ally’s washroom, also emphasising dignity of labour. If you find it difficult to clean after yourself, how can you expect others to do it for you,” asks Lakshmi.