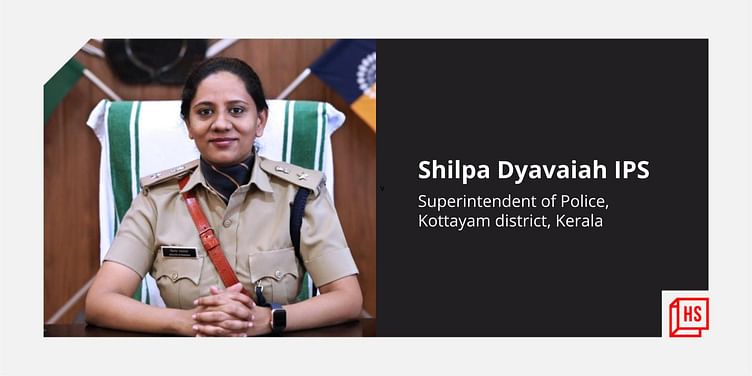 Shilpa Dyavaiah is Superintendent of Police (SP), Kottayam district, Kerala. Besides a top cop, Shilpa is also a mother to a 10-year-old. She takes us on her journey from graduating as an engineer to leading a corporate life to finally living her dream of donning the uniform and making an impact.

Speaking to HerStory as part of its Women in Governance series, Kottayam's Superintendent of Police (SP), Shilpa, talks about her journey as a woman officer, and why she does not regret leaving a cushy corporate career.

“As a child, I used to see my father who was in the Indian Forest Service in the Karnataka cadre go about his work, and also his colleagues, and I would be very inspired by them, especially by the women officers in such roles. So, I always wanted to become an officer, but that dream got diluted with the IT craze, as everyone was getting into the IT industry at the time,” Shilpa says, referring to her career as a Business Analyst with Tata Consultancy Services that she held in the early 2010s.

However, despite travelling to different countries, working in a customer-facing role, and leading the quintessential corporate life, Shilpa felt there was always “this calling”—the urge to join India’s civil services.

In 2012, after the birth of her daughter, Shilpa used her maternity break to start preparing for the civil services exams. She didn’t make it in the first attempt, but her second attempt in 2015 was a success.

“Although my first preference was the IAS (Indian Administrative Service), I’m very happy today that I got into IPS (Indian Police Service). Everyone feels the IPS is a difficult journey, or that it is a tough post for a woman, but I did not feel this after joining the service. I was able to adapt," she says.

Interestingly, Shilpa undertook the arduous first year of IPS training when her daughter was only four years old.

Shilpa joined the Kerala cadre in 2016. She says the journey so far has been “amazing.”

“Many people ask me if I miss working for a corporate, or if I miss working abroad. There’s not a single day when I have felt like I’m missing that life because this role is so fulfilling. The police service is the most visible form of government. The people who seek help from the police come with so much hope, and every little thing we do, makes such a difference to someone out there,” vouches Shilpa.

In the last six years since being in active service, the engineer-and-MBA-grad-turned-police-officer has seen it all–from murders and cases of domestic violence to thefts and riots.

“Sometimes, the reality is stranger than fiction, like the Koodathayi cyanide murders in Kozhikode. As ASP (Assistant Superintendent of Police) at the time, I was part of the investigation team, and it was a big learning for me as to how such cases are investigated," the officer says.

The Koodathayi case, which made headlines in 2019, involved six murders over a span of 14 years. The investigation led to the arrest of Jolly Joseph, who after being arrested in October 2019, confessed to using cyanide to kill six of her own family members.

When asked if she ever felt shaken by the extreme nature of such cases, Shilpa says, “It’s all part of the profession and we start accepting it. People have their reasons to be a certain way, and we are nobody to judge. We go about our jobs objectively and see to it that justice is done.”

Covid and leading from the front line

Shilpa is one of the few women officers in a male-dominated profession, a fact that she is quick to brush aside as inconsequential in the current times.

“There were many more lady officers in the cadre before me. Sreelekha ma’am was the first IPS officer in Kerala, and there was also Sandhya ma’am, and they set a good precedence.”

“This district is being run by women officers, and being run beautifully. People are more aware here, and they report more often. There are mechanisms in place even if cases are not reported, like other organisations that approach the relevant bodies.”

Shilpa was the first woman IPS officer ever to be posted in the communally sensitive district of Kasargod, when she was posted there as an independent officer. She was called back to the region when it turned into a Covid hotspot in 2020.

“Everything was new, the virus itself was new, and nobody knew what to do. Kasargod was becoming a hotspot. Under Vijay Sakhare sir’s leadership, I learnt how to work under the circumstances. We were sent in March 2020, when we came up with the triple lockdown strategy to reverse the numbers,” recalls Shilpa.

Talking about challenges, she talks about her first year of training in Mussoorie and Hyderabad.

“After childbirth, women suffer from low calcium levels, so we are more prone to fractures. There were three of us women in the academy, it was challenging and physically demanding but it was fine, we all coped well, and we came out stronger,” she recalls.

That first year of training in Mussoorie and Hyderabad, she says, set the course for the kind of life that she had to lead.

“Sometimes, it is challenging to balance all aspects of life, and it may require you to sacrifice some part of your personal life. I am not able to accompany my daughter to birthday parties, but my family has been so supportive. My parents, in-laws, husband and even my child understand that this is what is required from my job. So that really helps,” she says.

Shilpa fondly remembers the days when her father would look after her baby so she could study for the civil services exams, and even helped her in the lessons from his own experience as a civil servant.

“I was not a very sporty person. However, the academy makes you face your fears–from running three kilometres a day to bungee jumping. Since law enforcement is very dynamic, every day is different and there are many changing scenarios. We learn to deal with it all,” she says.

“As a service, it is extremely satisfying, even though it is an emergency service. We have minimum and maximum working hours, and we ensure our personnel are well-rested,” she says.

She attributes this to the positive changes brought about under the leadership of the former Director-General of Police (DGP), Jacob Punnoose.

“He advocated community policing and worked towards bridging the gap between the police and public through the participation of citizens.”

Incidentally, months before Shilpa entered the force, she watched Jacob Punnoose in an episode of Satyameva Jayate with Aamir Khan, and remembers feeling enthralled by his story of community policing. Little did she imagine then, that one day, she would herself be walking the talk.

Today, Shilpa wears many hats– top cop, mother, wife, daughter, and the friendly police officer to whom even matters of small marital squabbles are sent.

But be it meeting district officials, investigating a crime scene, touring around her jurisdiction, or attending a PTA meeting–it’s all in a day’s work for this calm and collected woman officer.