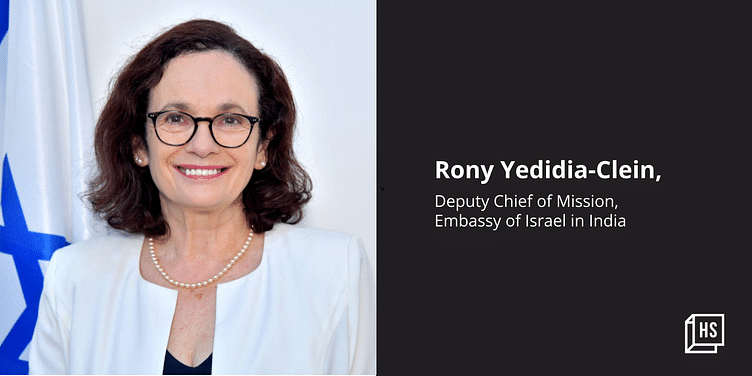 As Deputy Head of Mission of Embassy of Israel in India, Rony Yedidia-Clein leaves the country after two years. She looks back on the challenges of the pandemic and touches upon 30 years of diplomatic relations between India and Israel.

Rony Yedidia-Clein arrived in New Delhi in August 2020 to begin her tenure as the Deputy Chief of Mission of the Embassy of Israel in India.

The past two years were spent facing the challenges of a pandemic, where Rony and her team strived to reach Israeli assistance to needy people and hospitals in India. During her stint, The Israel Embassy also organised an Advanced Entrepreneurship Programme in collaboration with IIT Delhi and the WEE Foundation to mentor 26 women entrepreneurs.

Rony’s tenure ends in August and she will move to Cote d'Ivoire as Ambassador. Rony began her diplomatic career in 1994 as a member of the prestigious Diplomatic Cadets’ course, specialising in administrative affairs.

She has also held a variety of positions in the Ministry of Foreign Affairs headquarters in Jerusalem, as well as a tenure as Foreign Policy Adviser to the Minister of Culture.

In an interview with HerStory, she speaks of her time as Deputy Head of Mission, the challenges, and what she will take away from her time in New Delhi.

HerStory (HS): Can you tell me a little about your growing up years, and then leading to your career as a diplomat.

Rony Yedidia-Clein (RYC): I am Israeli by birth, both my parents were Israeli, but I was born in France because my father was relocated there.

I grew up in the US, and after finishing high school, I thought of going back to Israel and do what most of my cohorts do at that age–join the Israeli Defence Force (IDF). This is a sort of a rite of passage for many young Israelis who go into the military. It helps build one’s character and helps with leadership skills.

After two years, I studied English Literature at Tel Aviv University. I also have an MA in American Studies, and another in Public Policy that has helped me very much in my career as a diplomat. I've been a diplomat for 28 years, and India is my fifth posting. I have been posted to some very exciting and interesting cities–Istanbul, Moscow, Boston, and London.

I have two children, and together with my husband, we have six children–three boys and three girls. All our children are now grown and have families of their own, and are living around the world, most of them in Israel.

HS: You came to India when the pandemic was at its peak… It must have been tough. Can you take us through these two years…

RYC: As a diplomat, my job is to meet and get to know people and make friends. It’s very difficult to do this on Zoom, where you right away get to business, and you don’t have that extra time around the meeting to make a cup of coffee, talk to each other, or get to know each a little bit more.

I think this was probably my biggest challenge over the past two years.

We had a very interesting two years–it was an opportunity for us to do quite a lot with our Indian counterparts–working on bringing assistance to India during the harsh second wave, the health camps for women in underprivileged areas and more.

HS: This year also marks 30 years of Indo-Israeli diplomatic ties… a big milestone. Can you throw light on some of the key developments, especially on collaborations in technology and startups?

RYC: We have projects that are meant to help young Indian startups develop the kind of ecosystem we have in Israel and also help the Indian government work towards developing that ecosystem.

Recently, we had a mentorship programme in Delhi for young women entrepreneurs mentored by an Israeli leader in tech, Nava Swersky, to help them build their businesses and products and push them in this world of innovation, which is sometimes a bit complicated to navigate. We are happy that we are able to bring in women who have succeeded in the Israeli startup scene to mentor women in India.

HS: How can India and Israel benefit from each other’s strengths and expertise?

RYC: Both countries have young and active populations. I think India has the capacity to build things Israel does not because it’s a small country in comparison. Although, we always say, together, India and Israel make up 20 percent of the world or even more.

India has the capacity to build things Israel cannot, while Israel has a lot of innovation, interesting ways of looking at things, and flexibility. We can bring together talents that can benefit the entire world.

For example, we have an Indian company and an Israeli company working together in the UAE to produce cleaners for solar reflectors. For this, we are bringing together Israeli innovation and Indian capacity with UAE capital. It’s important that we work together on ways to help the environment, fight climate change, and be sustainable for the entire world.

HS: Can you detail any interesting experiences as part of your two-year stint in India?

RYC: When I look back, I think of the huge operation in April 2021, where we brought in 60 tonnes of assistance. My colleagues and I were at the airport, working together with people from the Ministry of External Affairs to get it out as quickly and efficiently as possible to the people and hospitals that needed them.

I’ve also had the privilege of visiting Rishikesh and meeting people in the ashram, and visiting Kerala and Puducherry–two beautiful places I fell in love with.

HS: What are your thoughts on women’s rights and gender equality?

RYC: I have found incredibly strong women in India like Minister Smriti Irani. She recently wrote an article on women’s reproductive rights in India, which I found very informative and enlightening.

While there are some wonderful women In India as there are in Israel, both countries have a long way to go, before women’s rights are fully realised.

We both have problems with sexual harassment in the workplace and domestic violence that needs to be addressed properly, and both countries are working very hard on it.

This is another area of cooperation between India and Israel–we have Mashav, which is our International Development arm in the Ministry of Foreign Affairs that runs courses for women from around the world about addressing domestic violence, sexual harassment in the workplace, and all issues important for all of us to work on.

HS: In your 28-year career as a diplomat, do you think you’ve had to work harder to reach where you are today?

RYC: I think I probably have, because sometimes a woman is sort of discounted when she is trying to advance and attain a goal in her career. As a woman, I may not have achieved the goals that I could have achieved if I were a man. But on the other hand, I have been appointed ambassador of Cote d'Ivoire, and I am very proud of that.

Also, over the past couple of years, and thanks largely to the foreign minister who is very feminist-minded, we have a woman as the head of the political and multilateral wing of the Ministry of Foreign Affairs, the first woman to reach this position. We also have several women who have been ambassadors, heads of mission, and deputy director generals.

HS: Who have been your biggest inspirations…

RYC: My greatest inspiration was my grandmother, a Doctor of Law and way ahead of her time. She was a judge from Germany and when she moved to Israel, she was a very strong parole officer, and a social worker. She is my role model. In my professional life, there are several women in the Ministry who have inspired me.

HS: When you leave Delhi in August, what are you taking back with you?

RYC: As charge d’affaires for many months, I was able to lead a capable and talented team at the embassy. Personally, it was an adventure for my husband and I to explore Delhi and other parts of the country and meet many people in this incredible country.