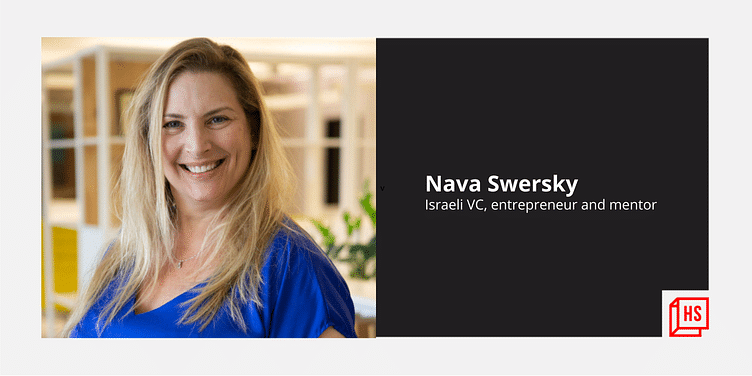 Nava Swersky is a tech entrepreneur with over 30 years of international experience. She is also a VC with expertise in innovation and technology commercialisation.

When Nava Swersky established the world’s first women-led VC funds, Columbine Ventures in 2000 in partnership with Shamrock—the Roy Disney family investment arm—a tech writer from a leading daily in Israel approached her for an interview.

Nava told him that apart from Columbine being an-all women VC firm, there was nothing else to write about it at the time and asked him to approach her when there was something concrete from a business perspective.

“I wanted to be taken seriously as a business person and not as a curiosity. And that’s what happened. In 2003, we did a very good deal for one of our companies; it was the deal of the year as well as the exit of the year,” she tells HerStory.

The reporter did end up writing a piece on Columbine that year, including the “all-women” titbit. “But it wasn’t the hook,” emphasises Nava. “It was important to me to be taken seriously and not at face value for what we were doing.”

Recently, the entrepreneur-turned-VC was in India to mentor 26 women entrepreneurs as part of the Advanced Entrepreneurship Program organised by the Israel Embassy of India in collaboration with IIT Delhi and the WEE Foundation.

India and Israel are celebrating 30 years of diplomatic relations.

Nava’s family has its roots in South Africa, and she’s a first-generation Israeli. She began her career as a lawyer and was a litigator for several years in the Israeli military before pursuing an MBA at IMD, one of Europe’s top schools.

She received an offer to join Ciba (now Novartis) at its head office in Basel, Switzerland. It was the beginning of a long career in the biomedical industry, pharmaceuticals, and healthcare. After five years, she moved to California and into the venture capital space on behalf of Novartis.

There, she joined Sanderling—one of the earliest and largest healthcare investment firms—and began focusing on early-stage investing.

“I went from a very large corporation to starting companies out of university research and giving them their first funding. I discovered I liked the ability to make a difference with what I had learned…using that to make a difference in healthcare and entrepreneurship,” she says.

It was the early 90s and there were very few women in venture capital. She decided to move back to Israel and start her own fund to invest in the biomedical field.

When Nava set out to establish a team, she found that the best people for the jobs were women.

“And so, I ended up founding the world’s first female-only VC firm quite by chance. I must admit I wasn’t looking only for women—only good people. And, they just happened to be women. So, we ended up with half a dozen women in the office,” she says.

In 2005, she was headhunted to head Yissum Research Development Company, the tech transfer firm of the Hebrew University.

And that’s not all. In 2008, Nava founded NanoIsrael, a platform to showcase Israeli nanotechnology and encourage industry-academia collaborations.

“We brought in thousands of people from 36 countries, creating a lot of opportunities by moving technology from industry into business, something I’ve always been passionate about,” she says.

From STEM to STEAM

She created a postgraduate entrepreneurship and innovation programme at Rimon School of Music, a leading institute in Israel affiliated with the Berklee College of Music, Boston.

Nava explains, “We teach entrepreneurship, innovation, and programming. The idea is to give the musicians a glimpse of the business world, a basic understanding of the tools they are going to need.”

She points out that not all music school graduates go on to become full-time musicians.

“With this programme, they are exposed to the industry. Recently, I hosted the CEO of Waves Audio, one of the most successful music tech companies in the world, that does plugins—bits of software that make sound in everything we use, from laptops to live concerts too, and of course, recorded music. He shared his story with students and they understood it as a business,” she adds.

Apart from being a VC and entrepreneur, Nava is also on the board of many companies and says while these different roles were not planned, she is passionate about her commitment to mentoring women, gender equity, equality, and equal opportunities in the workplace and beyond.

Which brings us to the question—has women’s entrepreneurship really evolved over the years?

“The biggest change we are seeing in recent years is that the issue is on the table. There were always women entrepreneurs but we were a tiny minority and no efforts were made to grow that number, and women received very little support in a male-dominated society,” she says.

Nava states the obvious when she says that even today, a very small percentage of funding goes to women entrepreneurs.

“We are not asking for special rights, we want equal treatment.”

While Israeli law specifies one woman on the board, Nava is emphatic that it’s not enough.

“If there are fewer women, you are missing out on the clear financial benefits of diversity. It's well documented—diverse boards bring better financial results and companies need that,” she says.

From the fields to the power corridor, Dana Kursh's journey as an Israeli diplomat in India

On the collaboration between the Israeli Embassy, IIT Delhi and WEE Foundation, Nava says, “I am very impressed with the women in the group. There was a great diversity of fields, from water purification, sewage treatment, vehicles, FMCG, and more. We had a demo day on the last day, and a certain number of participants will be selected to come to Israel as part of business delegations from India and get introduced to startup nations and will hopefully be able to find business connections here.”

Nava was impressed by the vision behind each startup.

“Every one of these women had taken her own personal experience and her own pain to find a solution. What was also impressive was the entrepreneurial drive, levels of commitment and achievement they have been able to bring to the table with very little funding.”

In 2021, McKinsey in association with Leanin.org released the Women in Workplace report, speaking of the ‘broken rung’ that still holds women back.

Nava believes it’s not enough to bring women in, you have to make sure they progress and go up the ladder.

“Just mentoring is not enough,” she remarks.

“When I’m in a workplace, and I want people to rise through the ranks, I need to champion that. I need to actively help them. Those who champion others necessarily have to be women. Nor do mentors have to be women. But the people who are being championed, should be women, because they are not getting the same level of hearing, or screen time.”

She emphasises it’s time big business supported, promoted, and championed women. And as we move forward, the onus has to be on employers, companies, businesses, and policymakers.

“We should also start talking about parents in the workplace, and not just mothers. When we do that, it will bring in significant change,” she says.

Nava is happy that the younger generation is realising this and spending more time with their children than their predecessors.

As for the future, she says she would love to come to India regularly.

“We haven’t even scratched the surface. There is room to do a lot more together. This programme has left me with a desire to come back and hopefully help in making a difference,” Nava says.