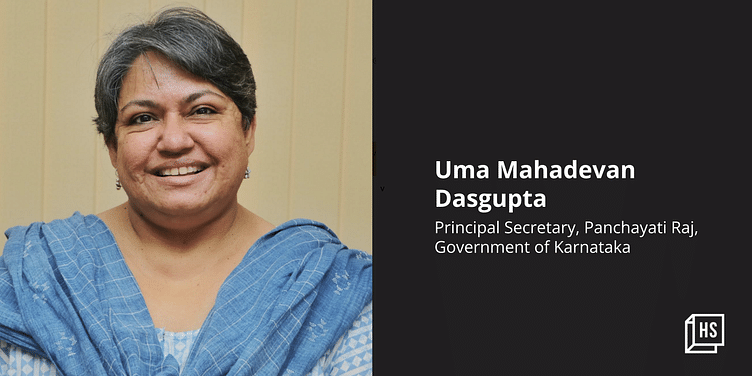 Uma Mahadevan Dasgupta says that the best part of her fairly unconventional career is that no day is ever boring.

As the Principal Secretary, Panchayati Raj, Government of Karnataka, Uma cares most “about working for those who are at the margins of whichever sector she is in.”

“It’s difficult to choose, but some of my most cherished areas of work are in the field of non-formal education–for school children, adult literacy, anganwadis, disability, adolescent girls, women’s empowerment, trans rights, and now the work of rural libraries. It has been special to design and implement policy interventions in these sectors,” she tells HerStory.

Born in Mumbai and raised in different parts of the country, Delhi, Chennai, Kolkata and finally Bengaluru, Uma studied English literature in college and taught French in a school for a year while preparing for the civil service exams and then joined the Indian Administrative Service (IAS) in 1992.

“I wanted to do something to acknowledge and ease the struggle of so many poor women,” she says.

She recollects having a woman who worked in her home part-time who would often come to work with terrible bruises on her arms and body.

“She would sit in our kitchen and weep quietly on those days. My mother would make her a cup of tea and they would talk quietly. She later explained to me that the woman’s husband was an alcoholic and beat her regularly. My mother also said the best way to help such women was through the system. This memory stayed with me,” Uma shares.

Her first posting was in Madhugiri, a subdivision of Tumkur in Karnataka, and then Sagar taluk, deep in the Malnad region of Karnataka, in the Western Ghats.

In Madhugiri, she helped restore a historical kalyani (pond) that was part of the town’s heritage but had almost disappeared under a landfill. This was entirely a voluntary effort.

Sagar, an area with heavy rainfall, thick forests and plantations, came with a completely different set of issues.

“Here, too, I experienced deep affection and respect from the people. I met some amazing people and made some dear friends, including the great intellectual and cultural activist KV Subbanna of Heggodu. Both Madhugiri and Sagar were great places to work and I learnt a lot as a young officer,” she says.

Uma believes that Karnataka being at the forefront of decentralisation, it’s a vibrant sector to be working in. There are around 6,000 gram panchayats, along with taluk and zilla panchayats.

She points out that gram panchayats have played a key role in effective Covid management in rural areas.

“We helped them by setting up task forces for convergent local action, giving these task forces online training in multiple sessions, and issuing enabling orders that would help them to do their work effectively,” she says.

“It was a massive exercise, but essential, and we were able to do it effectively,” she observes.

They are now working on guiding gram panchayats to revise their taxes, collect them online, deliver services effectively, and improve local governance. Gram panchayats will also take up perspective planning, including child and gender budgeting, this year.

“Beyond the basic activities of street lights, drinking water, and sanitation, gram panchayats have been taking up supportive activities for anganwadis, schools, hostels, and veterinary clinics. They are taking up greater responsibilities of local governance, which is as it should be. Very soon, Panchayat Development Officers will be carrying out the registration of births and deaths, as well as marriage registration. This will greatly help rural communities,” Uma says.

Karnataka’s over 5,600 rural public libraries have enrolled 18 lakh children from rural areas as members, free of charge. This, Uma believes, has been possible not only because of the enrolment efforts, but it has been possible because children themselves wanted to come to the library. The rural libraries are now functioning as decentralised learning hubs.

“NGOs, corporates, donor organisations, and individuals have donated over a million books. In addition, many organisations like Azim Premji Foundation, Sikshana Foundation, Pratham Books, Dell Technologies, Adhyayan, Concerned for Working Children, BGVS, India Literacy Project, Yuva Chintana Foundation, and many more are partnering with us. More than 3,000 rural libraries are now equipped with computers and internet connectivity,” she says.

She also touches upon the role of 1.4 million strong network of anganwadis that provides care for the country's youngest children.

In Karnataka, anganwadis function for six-and-a-half hours daily, which makes them function as partial day care for poor mothers, who can leave their young children safely while they go out for paid work.

“Apart from other services, Karnataka's anganwadis provide eggs, milk, and hot meals daily not only to around two million children in the state, but also to the state's pregnant women and breastfeeding mothers. This daily hot meal for pregnant women has helped to improve gestational weight gain, improve haemoglobin levels, improve birth weight of babies, and also to improve mental health status of pregnant women through the informal social networks that they form by coming to the anganwadi every day,” she points out.

While Covid did partially impact the daily functioning of anganwadis, like everything else, Uma says meal supplementation through take home rations and dry rations distribution continued.

“Gram panchayat task forces played an important role in ensuring the effective distribution of these provisions. Although the anganwadis were closed for daily childcare to ensure safety of children, the anganwadi workers and helpers worked on spreading science-based awareness, on contact tracing, ensuring essential services, and on Covid vaccination. I have seen how anganwadi workers even held the hand of elderly persons who were nervous about the vaccination,” Uma says.

Another special initiative, close to her heart, is to involve women’s groups in the local management of solid waste in gram panchayats. Not as employees doing the work of segregation, but as entrepreneurs taking up the work end-to-end. As part of this, more than 3,000 gram panchayats have signed MoUs with women's SHG federations. Over 3,000 women signed up for the thirty-day residential driving training, and more than 700 women have already completed the training course.

“Women driving the solid waste auto-tippers may not seem like a big thing, but it is a great step in women's empowerment in rural areas. There are women in Kolar, Uttara Kannada, Haveri, Yadgir, all driving the mini-trucks, and experiencing that sense of empowerment sitting at the wheel of the vehicle. Little girls in villages will see them and realise that no more jobs are out of bounds for women,” she shares.

She observes with pride, a young woman in a remote part of Uttara Kannada who is the first woman in her community to have got a driving licence.

Uma admits that we live in a world that is still patriarchal in so many ways.

“The first women to join the civil services faced huge challenges, but today there is a hall named after Anna Rajam Malhotra in the IAS Academy in Mussoorie. So, I will say that these things take time, and we do see things changing over time. It's good to see that women form as many as one third of the recent batches of the IAS. Representation is important because the civil services must look more like the people whom we are meant to serve.”

To those aspiring for a career in the Civil Services, or already in one, Uma has some pragmatic words of advice.

“Every day offers so many opportunities to do something meaningful! I would also like to add this advice to young women at the start of their career in the civil services: that it's not about us, it's about the work. Whichever role we are working in, there is always scope to make lives a bit easier for other women and girls who are less privileged than us. Ensure safe, inclusive, harassment-free and discrimination-free workplaces where colleagues treat each other with respect,” she signs off.