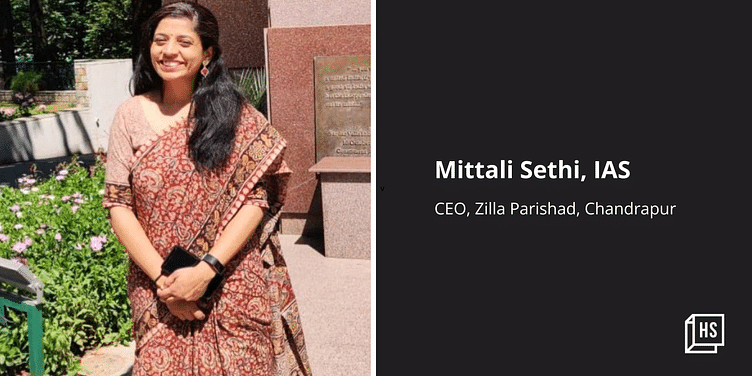 As CEO, Zilla Parishad, Chandrapur, Mittali Sethi’s areas of focus include education and sanitation. In her previous stint in Melghat, a tribal region in Maharashtra, she played an important role in understanding and finding solutions to combat child nutrition issues in the region.

A board outside the Zilla Parishad office in Chandrapur, Maharashtra displays the telephone number of its CEO, Mittali Sethi.

An IAS officer of the 2017 batch (Maharashtra cadre), Mittali says she has not had a problem with inappropriate calls so far.

“All officers’ numbers including mine are displayed outside the office. Initially, people dissuaded me from doing so because of unwarranted calls. On the contrary, I think people are quite intelligent and will call you only if they face challenges or are not able to sort them out with other officers,” she tells HerStory.

Mittali completes a year in Chandrapur on July 1. Previously, she was posted as Project Officer, Integrated Tribal Development Project (ITDP) in Melghat, a predominantly tribal region in Maharashtra.

Being a part of initiatives related to child nutrition, tribal development and education in both her postings, Mittali’s entry into the civil services is quite a story in itself.

Born and raised in Jalandhar, Mittali completed her bachelor's and master's in dental surgery in Amritsar and Chennai. She worked as an orthodontist in Puducherry for two years. Civil services, she says, was the last thing in her mind, and she did not even know the full form of IAS.

Mittali loved her job as an orthodontist, but over time, began questioning herself.

“Somewhere in between attending to patients, I wanted to get out of the room I was sitting in and wondering what else I could do,” she says, adding, “Unfortunately, orthodontics is a cosmetic part of dentistry and I was not very comfortable with just treating the very rich.”

A camp that changed her life forever

Mittali’s decision to attend a youth camp in Gadchiroli, a town in Maharashtra changed her life in more ways than she could imagine. It also set her off on the path of becoming a civil servant, she says. Her husband, a Maharashtrian himself, was initially reluctant with her decision, but eventually gave in.

“As part of the camp, we visited villages and in one, I was astonished that was no instance of dental caries, which is common among children who sleep with milk bottles in their mouths. They told me that their children have never had milk as there was no supply chain reaching the area because the Naxals blow up the roads,” she says.

In another instance, she met a teacher teaching English to students through dance. Mittali found the experiences transformative enough to understand that what she really wanted to do was make a difference.

“My first thought was to shift to Gadchiroli, as I was a dentist and my husband, a radiologist. In between, I met someone who was preparing for the Civil Services and I asked, what is IAS, what is UPSC, and he educated me on the process,” she says.

And, for the first time, in 10 years, Mittali picked up a newspaper to read. She admits she failed in the first two attempts, unable to clear the prelims. She continued working as an orthodontist and on her third try, passed the exams with an AIR rank of 56.

Her posting after the first phase of training was in Amravati and after the second phase, she took charge as the sub-divisional magistrate and Project Officer for the Integrated Development Project in Melghat, Amravati district.

Working on child health and nutrition

“Melghat is a unique region and similar to tribal areas in Jharkhand and Chattisgarh but is unlike other rural areas,” Mittali points out.

“It has huge scattered mountainous areas and a 70 percent Korku tribal population. The people do not understand Marathi, some of them comprehend Hindi as it was part of Vidarbha which was earlier attached to Madhya Pradesh,” she says.

With magisterial powers and as a project officer, Mittali had Rs 100 crore as funds at her disposal to implement various projects.

She discovered that the biggest problems in the region were in areas of health and nutrition–with high infant and maternal mortality rates and “health systems that needed understanding and setting in that context”.

Mittali took charge in October 2019 and by March 2020, COVID-19 added a huge strain to the existing healthcare system.

When a film festival was announced in Pune with tribal culture as its theme, Mittali struck upon the idea of making two films to showcase the region and raise awareness.

“If you look at the Korku population, the sex ratio is the highest in the district. The culture is pro-female and I thought why not showcase that. We shaped it as a community project, where people from the tribe would sing and act. One of the documentaries, Rani Beti won the third prize at the festival,” she says.

Working on health and nutrition, they also piloted a project with IIT-Bombay starting a trialogue between the community, NGOs and the government–creating a digital system to map the number of NGOs working in the area, the villages they work in, and access to government workers.

While looking at the months in which malnutrition peaked, they were surprised to find that it was not during the monsoon (diarrhoea being a cause) or winter (hypothermia). The peak happened from April to June.

“While correlating the data, we realised the migrant population came back to the region for Holi. They then went back because the brick kiln season is until June, and they returned for cropping and migrated again in October. I discovered that two blocks under my charge had more malnourishment than 12 blocks of the district combined,” she explains.

This brought home the point that the children were not getting the health services and vaccines they required because they were not part of data sets.

“If a child has left my boundary, the boundary he/she has entered into was not anybody’s concern. They were missing vaccinations because of this and it was a critical flaw in child health,” she adds.

The team started working on a migration tracking system for Melghat to track migrating populations which was later piloted in six districts and interstate pilots as well. COVID-19 vaccination hesitancy was another challenge that the team was able to surmount with aware with a serial in Korku, with an episode telecast every week.

Education and sanitation at a larger scale

As CEO, Zilla Parishad, Chandrapur, Mittali’s focus is on education and sanitation.

Out of 15 blocks she oversees, three are tribal and one urban.

“There is a lot of diversity in my work. All my learnings in health and nutrition in Melghat are being implemented here. But apart from that, I have learned to implement at scale. Here, I have 1,527 villages,” she says.

Last year, they launched the Garudzhep (Marathi for making a leap) initiative where 62,000 children in 1,560 schools were assessed for learning loss that had happened because of Covid.

“The 45-day programme assessed children at the alphabet, paragraph or story level for fundamental literacy and numeracy level (FLN) and found that several children had slipped into the red zone. We signed a MoU with IIT-Bombay to do a survey and put into place systems to change this scenario,” she elaborates.

Last month saw the launch of Padhai Bhi, Safai Bhi (Education and cleanliness go hand in hand) campaign that aims to open 150 rural libraries in six months and construct new and functional toilets so that children, especially girls, can go back to school. A scheme to gift cycles to children whose schools are three kilometres away from where they live is also part of this initiative.

Interestingly, she has also given anganwadis a creative twist by encouraging them to use tyres to make toys and also build playgrounds.

“I feel a lot of things don’t require a lot of money. One just has to be creative,” she says.

On the sanitation aspect, Mittali is working on dry waste being converted into things of value. For example, in her own office, she has a bench made entirely of plastic waste.

Does a CEO position of a government body mean that there is democratisation and less red tape?

Mittali laughs. “While decentralisation has allowed Zilla Parishads a lot of autonomy, there are diverse challenges too. We deal with so many people on the ground – several field officers and also indirect control from the state government. But the autonomy and the vast areas we deal with are unlike other machineries,” Mittali says.