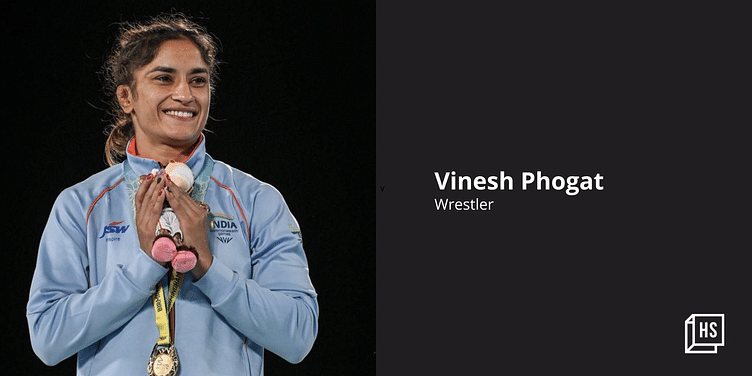 Wrestler Vinesh Phogat, who recently won the gold in the 53 kg category at the Commonwealth Games, talks about turning the tide after hitting rock bottom mentally.

A drastic change in the training regimen and the extra push that her family gave enabled Vinesh Phogat to turn the tide after a forgettable last 12 months, during which she "hit rock bottom mentally".

A premature exit from the Tokyo Olympics, where she went in as the top seed, injury issues, and run-ins with the wrestling federation pushed her into an abyss.

The 27-year-old's existing training methods were not yielding results. She had to go back to the drawing board.

After undergoing an elbow surgery in September, Vinesh only wanted to get her training right.

"If my training is going right, I feel fine mentally as well," she said after easing to a 53 kg gold at the Commonwealth Games 2022, Birmingham on Saturday.

"Only I know what I have done to win this medal. It feels a lot more special considering what I have gone through over the past 12 months," said Vinesh who is now a three-time CWG gold medallist.

Vinesh, who had to really dig deep to win the trials to make the CWG squad, was struggling for sparring partners in her category. The women were not strong enough, so she decided to train with the U-15 boys.

"She was not getting the required training earlier, but now she is. That is the difference according to me," said national coach Jitender Yadav on Vinesh's victorious comeback.

The star wrestler got emotional while talking about her struggles since the Tokyo Olympics.

"I had lost my confidence, I feel I have found it now. It happens with all the athletes at some point. Only I know what pains I have taken to be here. I had hit rock bottom mentally, I was not able to digest what was going wrong with me."

She is also not very particular about her diet but her family ensured she was fed pretty well.

"I can feel mentally fine only when my training is going fine. If it doesn't happen it disturbs me a lot. The environment around me has changed a lot (since Tokyo). My husband has started to stay with me when I am training (in Lucknow). They (family) push me a lot on my diet and make sure I am consuming enough milk and almonds. I have also started training with the boys, I didn't do that a lot earlier," she said.

Someone like Sakshi Malik started penning down her thoughts when she was going through a tough phase, but every athlete has a way of dealing with stress.

"I used to take a lot of notes, but after that phase, I tore them apart. I was like likhne aur mitaane se kuch nahi hona (there is no point penning down thoughts and then erasing them). It is all the will of the almighty and your training. I have been talking to a psychologist for six to seven years, but I keep it general. If I am training right, I become my own psychologist," she said with a laugh.