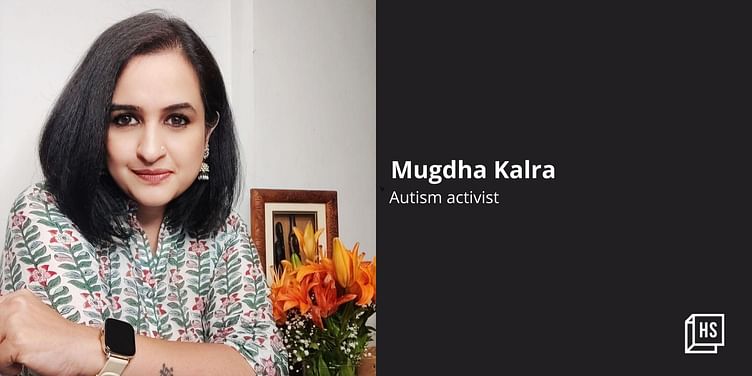 Mugdha Kalra is an autism activist and mother to a neurodiverse son. Her work towards empowering caregivers and mothers of children with special needs won her the recognition of BBC100Women 2021.

Her book, ‘Not That Different’, a comic strip on neurodiversity, originated from a similarly titled movement she started in collaboration with the children-led creative platform Bookosmia. The aim was to help children embrace neurodiversity, and the comic book follows 12-year-old Sara’s journey as she meets a new friend, Madhav, who has autism.

Neurodiversity is an umbrella term that is used to describe alternative thinking styles such as Dyslexia, Dyspraxia, Dyscalculia, Autism, and Attention Deficit Hyperactivity Disorder (ADHD).

Being a mother of a child with autism, Mugdha has seen from close quarters the trials and tribulations of caring for a vulnerable individual.

“Life completely changed when I had my son. He was diagnosed to be on the autism spectrum at the age of four, and as heart-breaking as it is for a parent, I started seeing the world through a different lens,” says Mugdha in a chat with HerStory.

Even as Mugdha’s journey of acceptance began, so did the realisation that caring for a special needs child as a mother required a completely different level of perseverance.

Acknowledging and accepting the challenges

“For the longest time, I thought I'll never be able to work, and that my career had ended. And just to vent, I started to blog,” recalls Mugdha.

The blog began garnering attention when other mothers in similar situations started to take notice and reached out to Mugdha. She realised there were support groups out there, doing their bit in their own way, which also encouraged her belief in the power of collective humanity.

“From concentrating on just my child, I moved to find out more about neurodiversity as a whole, and what can be done for the caregiver,” says Mugdha, who began to interact more with the caregiving community.

“Be it caring for a family member, a spouse or a child, nobody really cares about the mental health of the caregiver woman. There is so much intersectionality there, because, as a mother, as a woman, it’s easy for somebody to say that caregiving is your job,” she says.

Mugdha feels while there is a lot being done for children with special needs--from interventions and medical therapy to support, the caregivers have been relegated to the background.

Giving a glimpse into the life of a special needs mother, Mugdha, whose son Madhav is now 12 years old and attends a special school in Mumbai, talks about the time she met a pregnant teacher in her son’s school. The lady was instructed by her mother-in-law not to continue in the same environment as her “womb would be affected by the negative energy.”

Mugdha felt so strongly about supporting women in similar predicaments that she began writing vociferously about it.

When the Facebook and Instagram wave started, she started making videos and got involved with collaborators and stakeholders to increase awareness and support for the caregiving community.

Mugdha and a friend also run a support group on Facebook where they talk about suicide intervention, awareness, best practices, and more, and encourage mothers and other women caregivers to reach out to them to talk about their troubles.

They say collective action that is purposeful, organised and sustained over a period of time becomes a social movement, and in Mugdha’s case, her quiet determination and hard work was being noticed more than she fathomed.

When BBC released its list of 100 inspiring and influential women from around the world 2021, Mugdha was one among the two Indians who made it to the list.

“I was shocked. Initially, I thought they were approaching me to interview somebody. But then, when I got to know about the recognition, it was a validation that all that work was meaningful, despite it being a lonely battle,” she says.

The recognition from BBC opened many doors. One of the first projects that saw success was Mugdha’s movement and book—'Not That Different. “The comic book is meant for explaining autism to young children. It is also for siblings and parents of a special needs child as it makes it easier to talk about a difficult concept like autism,” says Mugdha, who wrote the book in collaboration with the digital platform for kids, Bookosmia.

Mugdha is now trying to reach out to schools and work with them to create awareness about neurodiverse children. “This is to show that these kinds of children can also attend typical schools, and parents are sensitised about inclusion. A lot of times, parents complain that their children are learning unwanted things, which is quite insensitive,” says Mugdha.

Philanthropist and fellow-autism activist Dame Stephanie from the UK also got in touch with Mugdha and funded one of her projects. “Although she’s now quite senior, she’s still very cool and kickass! Dame Stephanie had lost her autistic son when he was in his 40s, and so, she and her team do a lot of philanthropic work in autism,” explains Mugdha.

In her capacity as a business journalist, Mugdha meets several corporate stakeholders, CEOs, and other leaders whose voices matter. It is here that Mugdha wants to make a big difference, and she’s candid when she says she’s always bringing up the topic of neurodiversity in corporate circles. Be it neurodiverse hiring or training to include such individuals, there is definitely room for more, she says.

More inclusion in the workplace

“It will take years before everybody from the disabled community can find equal voice and place in a corporate setup. But, on an everyday basis, you see so many people in offices who are either taking care of ailing parents/spouses or have a special needs child, and better caregiver inclusion is the only way women will be able to go to work or work better,” says Mugdha.

Medical benefits, flexible timings, regular health checkups, or even donating a counselling session will all add up to building a solid caregiver-inclusive workspace, says Mugdha.

Mugdha’s work now involves working with parents and talking to them about opportunities for PwDs–be it how to apply for a job, or what it entails. “We also do a lot of work to create awareness about the UDID, and how parents can apply for the same on behalf of their wards,” says Mugdha.

The UDID, or “Unique ID for Persons with Disabilities”, is being implemented to create a National Database for PwDs and issue a Unique Disability Identity Card to each person with disabilities.

From working for caregivers to writing for children, it’s all in a day’s work for this journalist plus activist-mother. Ask her how she manages to juggle so many balls in the air, Mugdha says, “I feel just so strongly about this. And every little difference we make–even if I can save one mother from feeling lonely in her battle–I feel validated,” concludes Mugdha.

(This story has been updated to correct a typo)