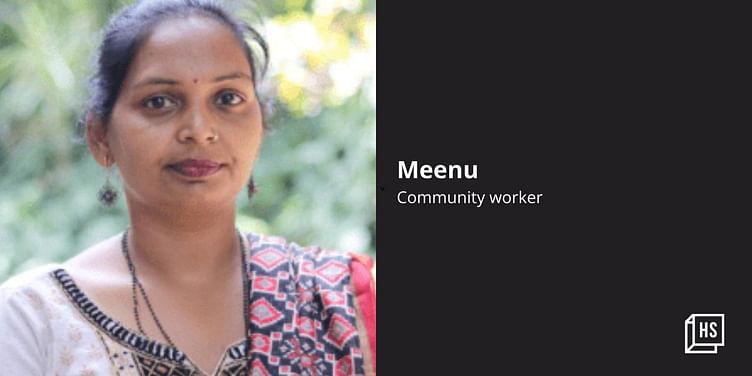 Meenu had to quit her studies after Class 8 to get married. She fought grave resistance from her husband and in-laws to carve a niche for herself as a community leader working for the benefit of women and children.

She is known as Meenu Didi in her social circles–someone to whom children and women run to share their problems and for information. But, in her own home, Meenu has been raging a determined battle–fighting stereotypes and standing her ground when her husband and in-laws prohibited her from going out to work.

“For 20 years, I was just a housewife who hid behind my ghoonghat. I was married off at 14, and was very naive for a long time,” says Meenu, a mother of three, hailing from the Kirari region in Delhi.

In 2013, Meenu tried to secure admission for one of her kids under the Right to Education (RTE) Act 12.1.c. Although she failed in her attempt, it did not stop her from helping other parents like her in the community. She educated them on the RTE process and assisted them with documentation and form-filling.

The Right to Education Act 2009, also known as the RTE Act 2009, was enacted by the Parliament of India on August 4, 2009, and came into effect on April 1, 2010. It describes the importance of free and compulsory education for children aged between 6-14 years in India under Article 21 (A) of the Constitution of India. This act made India one of the 135 countries to have made education a fundamental right for every child.

Through Meenu’s efforts, all the parents who applied for RTE admissions under her guidance secured free private school admissions for their kids.

This wasn’t just a new beginning for the children, but also a turning point in Meenu’s life.

In the early days, Meenu’s efforts started gaining a lot of attention and she soon attained a place on the local School Management Committee. As a member, she got to know more about RTE and also about a six-month training programme offered by Indus Action, an NGO that helps create and empower community leaders.

After undergoing the training, Meenu became one of the three women selected to become Mukhya Shiksha Sahyogis–a group of volunteers who were a part of the NGO’s Samaaj 3.5% Fellowship, and they also received support from Indus Action to uplift their communities. During this time, Meenu also worked hard to complete her Class 10, 11, and 12th exams.

“Throughout all these efforts, my husband, who worked as a driver, would come home drunk every night and beat me for going out to study and work. I would tell him that I was doing all this after finishing my household chores for the day, and even then, he would have a problem,” says Meenu. Her troubles were accelerated when her in-laws and neighbours added to the dissent.

“My father-in-law met my father to complain about me. My father’s reaction was a revelation. He looked at my in-laws and asked them what wrong I was doing, considering I was also fulfilling all my household responsibilities. That’s when I decided I would not give up.”

Once on board Indus Action, Meenu felt she had gained her identity. Her range of work included campaigning for RTE seats for deserving candidates, educating underprivileged children in government schools, and training young women and children in job prospects. Meenu eventually rose from a campaigner to the position of a field associate who was responsible for other women like her in the community.

“In Sultanpuri area, there was a slum where a lot of children weren’t attending schools. I used to accompany one of the social workers from Indus Action, and we used to sit on the streets and teach these children the basics of alphabets, numbers, and reading,” narrates Meenu.

She says the most fulfilling part of her job so far is the fieldwork, and the opportunities to mingle with people and make a difference. “For a few years, I worked as a field connect person, and when I couldn’t continue that role, I really missed it.”

In the course of this conversation, Meenu narrates how the role required her to engage with women in her community and train them in various skills.

“One of the women I worked with had severe stuttering issues. When she joined the training, she had to interact with many people, which helped her build her confidence. Now, her stuttering has come down by 70% at least,” says Meenu, who worked with the NGO for four years as a field worker.

Meenu has now branched out on her own as a community worker and is currently working on an independent project called Umeed. Through this, she is committed to making welfare schemes accessible to pregnant women and lactating mothers from deprived communities, apart from helping more children in her community get admissions under RTE. She says she reaches out to her former mentors at Indus Action whenever she feels stuck or needs support.

From a young bride who had to leave her education at Class 8 to a community leader who is running her own project, Meenu has indeed come a long way. She attributes her success to hard work, perseverance, and the guidance of Gayatri Dey, a social worker with Indus Action.

“I never knew how to use a smartphone or send a basic message. Gayatri didi always pushed me to learn new things and ask questions. Now, I can easily work on a computer--from Word docs to Excel sheets, nothing is tricky.”

They say good leaders lead by example. In Meenu’s case, it was her daughter who followed her shining example. When her husband continued his tirade against women getting educated, and prohibited his daughter from studying past Class 12, Meenu would have none of it. She encouraged her daughter to apply for her undergraduate studies, and ignore the noise.

“I told her if she wanted to succeed, she had to get out of our house. So, after graduation, she applied for the Gandhi Fellowship and bagged it. She is now pursuing her Master's in Ahmedabad,” says the proud mother.

As for Meenu, it’s a clear case of better late than never. Now, at 39, she’s ready to give her BA third-year exams, finally realising her dreams of pursuing higher education.