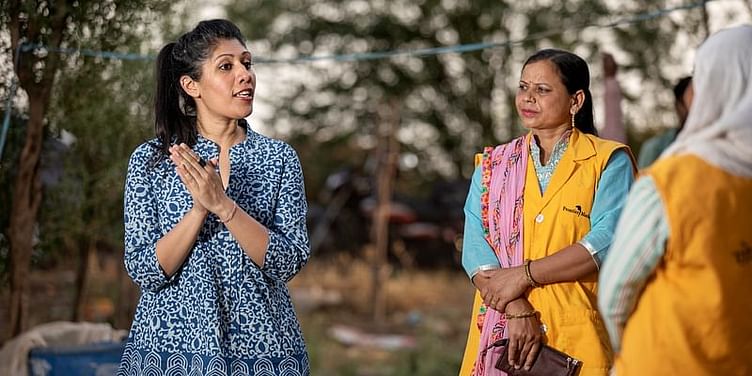 Ajaita Shah is the Founder of Frontier Markets, a rural distribution platform. She believes her network of Sahelis can tackle climate change by helping rural women leverage data to come up with sustainable solutions.

While studying International Relations at Tufts University, Massachusetts, in the early 2000s, Ajaita was introduced to microfinance. Later, she worked with various organisations like the SKS Foundation, Ujjvan Financial Services, Swayam Krishi Foundation, and others, before starting her own company–Frontier Markets–in 2011.

Headquartered in Jaipur, Rajasthan, Frontier Markets was founded to bridge markets between rural customers and solutions. The last-mile rural distribution startup built a platform that allows it to digitally manage all point-of-sale (PoS) transactions, interface with its value chain partners, and track deliveries in real-time.

The hybrid platform’s phygital store is driven by women called Sahelis, connecting customers to all kinds of solutions and data collection. Through the platform, Sahelis help facilitate the adoption of ecommerce for rural households, while capturing valuable customer insights.

Frontier Markets now covers 5,000 villages in two states–Uttar Pradesh and Rajasthan, and has sold more than 30 million products to 500,000 rural households in the last three years.

In a chat with HerStory, Ajaita talks about her experience being on the ground and working with the Sahelis, and why she believes these rural women have the power to tackle climate change.

“The rural women we work with are mothers, farmers, community leaders, entrepreneurs, and problem solvers in their own way. These women have dealt with drought conditions, lands being destroyed, etc. Her understanding of climate is massive, which is why she’s also the hungriest to change it,” says Ajaita.

She adds, “There are 100 million women farmers in India, but we don't know who they are, what they're doing, and what their pain points are. Our Sahelis are using our Meri Saheli app to map out a deeper understanding of who the women farmer is, and through that data, we've been able to work with agritech companies and climate tech companies to build solutions.”

The solutions Ajaita is talking about range from launching climate-resilient seeds, to introducing organic pesticides and organic farming practices to supporting the farmers with the right agri tools. She says, when the women realise that there are solutions to use their land in a better way, or even save it from destruction, they are ready to adopt the solutions in a heartbeat!

These entrepreneurs are making safe travel for women a reality

Straight from the ground

Taking the example of Anita, a Saheli from UP, Ajaita describes her journey from being a farmer battling mounting debts to becoming a problem solver. Forty-year-old Anita grew up with climate realities, and had seen everything from droughts to floods. As a farmer, she lost almost 50% of her crop yield due to climate-induced damage, and to repay debts, her husband had to move from the village and become a migrant labourer. Anita heard of Frontier Markets, and after joining the startup and becoming a Saheli, she started working extensively with a network of local women. She realised that the local women were all dealing with the same sort of farming challenges induced by climate change and began collecting data to feed back to Frontier Markets.

“Today, she has helped over 1,000 families access climate resilience seeds, get access to non-pesticide related products, and also introduced them to solar appliances,” says Ajaita.

Another major area of positive action towards climate change is waste management. It is well known that the disposal and treatment of waste can produce emissions of several greenhouse gases (GHGs), which contribute to global climate change. Ajaita says, with people in rural India changing the way they consume, and the FMCG sector being driven by the rural markets, it is important to let the rural demography know about waste management, plastic consumption, and recycling.

“Leveraging our platform, we have been able to use the Meri Saheli app to map out all the different kinds of plastics that are available in the villages, and create a reverse recycling system.”

She says the irony is that rural women are not carbon contributors, and yet, they are often the ones who have to deal with climate calamities directly. “Climate justice is about not making the person that didn't create the problem pay for it, but incentivising them to become the off-setters,” Ajaita says.

On the importance of corporate partners joining in this revolution, Ajaita says, FMCG giants like P&G, Marico, Unilever, and others that have been around forever, do come with a gender lens, understand the power of rural commerce, and understand that technology needs to be innovative.

On the next steps, in partnership with the Indian government, Frontier Markets aims to scale its efforts to reach one million women and 100 million rural households by 2025. It wants to become a one-stop solution to help families access all SDG-related solutions, and showcase digitally savvy women as the driving force for impact--from climate, to healthcare, to education, to economic prosperity.