These entrepreneurs are making safe travel for women a reality 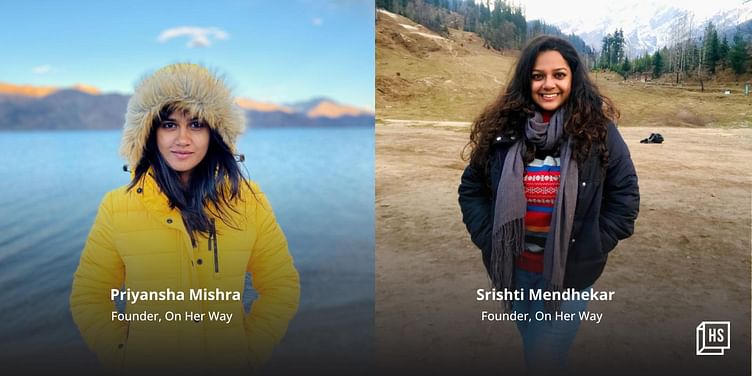 Srishti Mendhekar and Priyansha Mishra are the founders of On Her Way, a platform that connects women travellers to a local girl pal who can help them with any information, and also builds awareness about safe spaces.

As avid travellers, Srishti Mendhekar and Priyansha Mishra knew safety is always the first and foremost thing on fellow lady travellers’ minds. They often wondered what it feels like to travel without constant fear and anxiety...until one day they decided to do something about it.

The duo started ﻿On Her Way﻿, a platform to encourage safe solo travel for women, in January 2022.

Srishti and Priyansha, who are engineering graduates from the Manipal Institute of Technology, met while interning at a startup. Familiar interests and backgrounds ensured they instantly clicked, and together, they built a music community for their university--Chords & Co.

“We have been travellers all our lives owing to our parents’ transferrable jobs and our undying wanderlust. After travelling to 20+ states in India and witnessing the challenges women face, we felt we had to change the face of women’s travel not just in India, but across the globe,” Srishti tells HerStory.

Srishti recalls one particular incident that triggered thoughts about safety. On a trip to Himachal Pradesh with other female friends, the group booked a stay at a renowned hostel. While the place was aesthetic and had a beautiful view of the mountains, and it was love on arrival, one of Srishti’s friends realised after a couple of hours that the glass pane in the bathroom window was a double-view!

“We had least expected this property to have a peephole for a window. None of the reviews we saw mentioned this, no one called them out for it. There was a lack of information on something as crucial as this, which threatened our sense of safety,” says Srishti.

For Priyansha, a trip to Ladakh acted as a trigger. “When I was looking for safe spaces to stay in, I faced a lot of challenges finding relevant information online. There were some very well-rated stays that seemed great, but I would find that ONE review on the fourth page after digging deeper that would say something like “no streetlights in the area,” which would become a dealbreaker for me. Other women’s reviews relevant to my concerns were hard to find, which just increased my anxiety about my safety in these spaces.”

The experiences made them realise how the concerns of women and men while travelling are distinctly different.

“Women have needs and issues, which can be broadly categorised into safety and hygiene, and no one is solving that. The current travel ecosystem is made by men for men. We want to change that,” says Srishti.

After quickly putting together a plan, the young entrepreneurs sought feedback from other fellow travellers who had experienced the reality of solo travel in and around India.

On Her Way was launched in January 2022 while the entrepreneurs were still researching the various aspects of women’s travel. The duo left their jobs in mid-2022 to work on it full-time. A few months later, they also ran the idea through IIM Bangalore’s Women Entrepreneurship Programme and eHer by gradCapital, a student startup accelerator.

This woman entrepreneur has launched a healthcare platform for families, with a focus on postpartum, childcare

When travel and business come together

With On Her Way, Srishti and Priyanshi want to build for the ‘invisible woman traveller’ who, they believe, plays a very important part in the travel ecosystem, but still hasn’t had her needs met by travel businesses. “She actually influences 80% of travel decisions in a market that’s as big as $500 billion, globally,” says Srishti.

One of the concepts started on the platform was ‘Local Gal Pal’, which ensured solo women travellers who registered on the platform got introduced to a local woman at the destination of their travel. This person would provide all the required information and ensure help was available on hand at all times. This service is now offered exclusively to the members of the On Her Way community. Srishti and Priyansha ensure the local girl pal, handpicked by them, is always found through references, and is only onboarded after several stringent rounds of background checks.

The On Her Way community has 3,000+ women, and over 500 of them have trusted the platform, allowing it to help them travel better through their various pilot programmes.

While the community of women travellers is still a work in progress, Srishti informs that they recently onboarded the community's founding members. “We bring them offbeat experiences and connections in their own cities, exclusive retreats to great destinations, 100% support in safely planning their trips and a whole lot more. These founding members, while having all this fun, will help us shape the core of the platform and tailor the solution for them, right from day one,” she adds.

The two-women army, who have a bunch of interns working in their venture, have also actively started to curate and create different programmes for the community. Recently, they launched the #SafeSpaces initiative in Goa, which received a lot of appreciation in the state.

“With this initiative, we aim to make nightlife, one of the most integral parts of Goa’s tourism, safer for women travellers. We carefully picked 10 bars and worked with them towards creating a safe space for women to be themselves without any inhibitions,” says Priyansha.

Under the initiative, the travel startup sought a commitment from the bars to actively build a safe space for women, trained the bar staff on bystander intervention and helped them understand the right way to intervene when a woman in the space is feeling uncomfortable or unsafe. They also ensured that designated staff were recognisable through badges, and that they were reachable if a woman needed support.

Lastly, the initiative also saw them introducing a codeword shot that can be used as a signal to communicate distress in the select bar spaces.

All this hard work hasn't been easy, as the determined entrepreneurs have had to constantly hear that they are solving for a "niche" market, "even when stats point out that women are the majority," remarks Srishti. But, the duo have learnt to challenge perceptions. “When executing a lot of our projects with partner dependencies, there would be a general lack of confidence in two 20-something women. We are geared up to prove each one of them wrong as we scale this up globally," she adds.

Going forward, Srishti and Priyansha aim to grow the On Her Way community across all major cities and travel destinations in India by February next year, and across Asia by end of 2023. On competition, Srishti says goLightly in the West is an attempt to create a member-only platform in the region, which has been getting a lot of love. "However, in India, there is no major player working on a solution like ours."

The firm is backed and funded by gradCapital, and was a part of the first cohort of the Antler India Residency. “We are gearing up to raise our next round soon, and want to enable one billion women to travel fearlessly,” concludes Srishti.

India’s women artists may have evolved with time, but have the issues they’re fighting done the same?