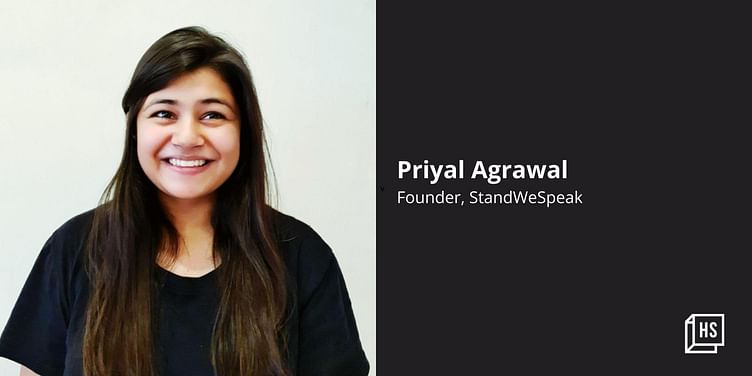 Priyal Agrawal is the founder of StandWeSpeak, a social sextech startup. The platform’s AI chatbot Mae is an AI-powered anonymous chatbot that addresses all sexual and reproductive health queries.

Priyal Agrawal has just returned to India after a whirlwind three-and-a-half-month trip to Seoul, South Korea. She was in the country as the founder of ﻿StandWeSpeak﻿, a sextech platform that was selected as one among 60 in the K-Startup Grand Challenge, a startup accelerator programme supported by the Government of South Korea. The accelerator had received over 2,500 applications for the same.

“Even though they knew that I was pre-revenue, and that we are beta testing our product, they liked it so much because there’s hardly any company in Korea that’s working on something very similar,” says 25-year-old Priyal in a chat with HerStory from her home in Raipur.

A few years ago, Priyal, a psychology graduate from Sophia College, Mumbai, had been working with Samaritans, a suicide prevention hotline. She felt that many youngsters today had compelling and pertinent doubts surrounding gender, sexuality, sexual health wellness, and more, but did not know where to seek answers.

At the same time, her 19-year-old friend, a victim of mental and physical abuse, became pregnant and resorted to abortion under wrongful guidance, which in turn led to further deterioration of her health.

“We have hospitals and clinics, but no solutions to prevent our young people from getting into such instances in the first place. That’s where education matters,” says Priyal.

In 2018, when Priyal was at the Goa Institute of Management (GIM) to conduct a workshop on mental health as part of Sangath, an NGO, she voiced her thoughts on floating a platform for sex education.

“The panellists there realised that I was very passionate about this cause, and helped me connect with the Atal Incubation Centre at GIM.” That set the ball rolling, and Priyal launched her startup StandWeSpeak in December 2019.

As a fresh graduate, being taken seriously was one of the first challenges that Priyal had to overcome.

"But I knew that this was an area that needed attention, more so as nobody really thinks it is important to talk openly about sexual and reproductive health, gender, sexuality, contraception, relationships, etc..” says Priyal. She adds that as a society, our unwillingness to talk openly about these subjects ends up in a lot of young women being unaware of what to do when they face abuse in relationships, and that’s why she wants StandWeSpeak to be a go-to platform that will help the youth make informed decisions.

From workshops to a platform

Priyal began by conducting workshops in Goa around February and March 2020. When the pandemic-induced lockdown was enforced, she decided to focus her energies on building a website.

“The idea was to build a website with digital, game-based content that addressed all sexual and reproductive health topics. But I wanted something more, so I started to conduct workshops in schools and colleges and also built a community, where I could share resources and respond to people's queries and doubts,” says Priyal.

She conducted surveys to understand the solutions the youth were looking for, and after getting over 2,000 responses, she realised that people found it difficult to open up publicly during a workshop, and preferred to reach out through email or messages one-on-one when they had a query. That moved Priyal to think of a chatbot, and she soon got working with a techie to build an AI-powered anonymous chatbot that would address all sexual and reproductive health queries. She decided to name it Mae. Over the course of time, Priyal managed to onboard a team comprising a techie, a content writer, and a doctor who would validate the content.

“We now partner with organisations and state governments to provide information videos in vernacular languages. We also have a team of experts ranging from gynaecologists, lawyers, intimacy coaches, counsellors, and mentors from across the world who have been working in this space,” says Priyal.

Some of the mentors at StandWeSpeak include Dr Kalpana Apte, CEO of the Family Planning Association of India; Amelia Jenkinson, CEO and Founder of the School of Sexuality Education; women’s rights lawyer Radhika Saxena; and Reema Ahmad, a life coach, and TEDx and Josh speaker who advocates strongly for child sexual abuse awareness and mental health issues.

Soon, Priyal plans to put in place a revenue model. She has identified three ways to do this: 1) customise Mae for organisations and institutions, 2) provide age-appropriate and customised information services and workshops to schools and colleges, and 3) teleconsultation services where users can book a session with any of the experts on the platform.

The startup received a grant of Rs 12 lakh from AIC-GIM, which gave the young founder the required push to follow through in the right direction, she says. A slew of recognitions in recent months has also helped Priyal spread the word, like being invited to promote social and gender equality at the World Bank Group Youth Summit 2022, and winning the Diana Award 2022. The startup was also among the top three winners of the World Bank Group Youth Summit Pitch Competition 2022, and UNDP's Springboard Plus Incubation Program 2022.

“These recognitions have helped build credibility around the work we do. There have been times when I have pitched my startup to investors, and they have brushed the idea aside as something that will never work. However, the global recognitions have made me realise that the work I’m doing has meaning. It has also led to more collaborations and funding opportunities,” says Priyal, who is now part of Villgro’s Yash Entrepreneurs Program.

“While we already cater to LGBTQ clients, we want to make the platform more queer-positive. We also plan on extending our services to Persons with Disabilities (PWDs), and adding services like voice search and sign language so that more disadvantaged people can make use of our content and services,” concludes Priyal.