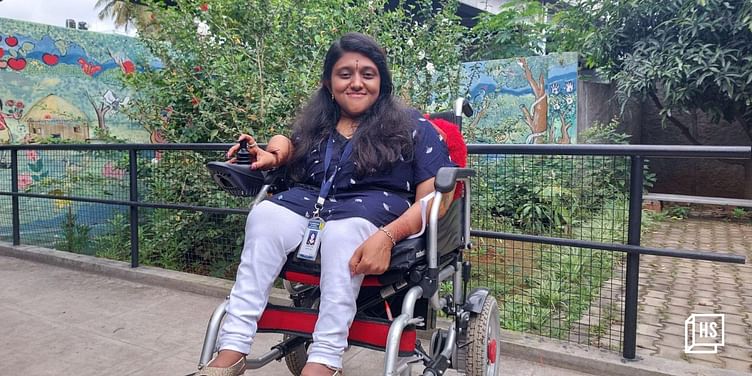 Ramya HM, who suffers from osteogenesis imperfecta (OI), is determined to make an impact in society. She now teaches at a school run by the Association of People with Disability in Bengaluru.

Thirty-three-year-old Ramya HM works as a Kannada teacher at a school run by the Association of People with Disability (APD), India. Strapped to a wheelchair, and armed with an infectious smile, Ramya says if there’s anyone who can understand the limitations of the students studying in this particular school, it is her.

And that’s because Ramya suffers from osteogenesis imperfecta (OI), commonly known as brittle bone disease, a rare genetic disorder present from birth. At birth, doctors told Ramya’s mother that they didn’t expect her to survive beyond three months, but three decades later, Ramya is not just a survivor, but a fighter who has overcome several obstacles along the way.

In a video call with HerStory, Ramya slips into fluent English and Kannada, recalling her days growing up in Hoskote, a taluka in Bengaluru Rural District.

“My childhood was very different. I could never play with my friends or participate in any activities at school,” says Ramya, whose battle to get accepted started right from school days as many schools in her area turned down admission stating they were unable to care for her.

Financial constraints were aplenty, as her mother earned her living teaching at an anganwadi. Nevertheless, she did make sure to hire an auto to transport her daughter to school and back every day when Ramya started studying at a government primary school.

“When it was time for college, my mother approached the nearest government degree college. They refused admission outright but my mother begged them. I could not bear to see my mother in that state. That’s when I told her that she is never going to bow down in front of anyone again. I loved to study and I knew that I would get the right opportunity, if not in my town then elsewhere,” Ramya says.

“The authorities there immediately understood my passion for education. They said if we do not help people like you, then why are we here? That reinforced my belief in people and the system,” says Ramya, adding that the three years spent in college saw her being assisted at every step of the way, whether it was in taking notes, or being given extra time for deadlines. She passed with flying colours, and thereafter applied for a distance education programme from Bangalore University to complete her MA in Political Science.

It was then that Ramya started dreaming of attempting the competitive exams. “I thought becoming a bureaucrat, I would be able to help others like me.”

However, the experience of writing the exams left her less than enthusiastic and bordering on pessimism.

Ramya was scheduled to take the exams in a well-known government college in Bangalore. “The exam hall was on the third floor, and there was no lift. When I requested that they could make an exception for me, it fell on deaf ears. My mother who was accompanying me had to haul me up three floors. At the end of the day, my mother was in tears and advised me to go easy,” says Ramya, who gave up on her civil service dreams when she realised the path ahead would not be easy, and would only add to her mother’s worries.

In 2017, Ramya applied for a B Ed programme from Sharada College, Mulbagal. She says she was amazed at how accommodative the college was as a Bachelor’s in Education is typically a classroom-led programme with extensive work involving interactions.

After completing her programme, Ramya was hired by the Association of Persons with Disability (APD) as a teacher in their school at Lingarajapuram in Bengaluru.

Ramya currently resides in a rented house close to the school, from where “I zoom into the school in my electric wheelchair”.

She teaches Kannada to students from Class 4 through Class 7. “I absolutely love my job. Sometimes, handling the kids can be difficult as they also take advantage of the fact that I’m in a wheelchair, but, all in all, it is a great experience teaching disabled children. I feel like I know what they are going through, so I can connect with them. The APD has been wonderful in the way they have made sure that all the facilities in the school are disabled-friendly,” Ramya says.

While she plans to continue being a teacher for the long term, Ramya also wants to actively campaign for awareness building.

“There are many government schemes for the disabled, which a lot of people are largely unaware of, like the 5% reservation. I have come to know of these through my work. I want more people like me to benefit from these schemes.”

Recently, ahead of the International Day of Persons with Disabilities (IDPD), the APD organised a full-day interactive awareness drive at Lalbagh Botanical Garden (East Gate) in Bengaluru. The event aimed to nurture inclusivity and build awareness of scaling accessibility in public spaces for people with disabilities.

Ramya also attended the event, and excitedly talks about her first-ever visit to the famous botanical garden.

“I’ve led a very restrictive life so far, never moved around freely. Going to Lalbagh with the help of my APD friends was amazing. We went around the garden, assessed how disable-friendly it was, and enjoyed a lovely day of interactions with others like me,” she says.

She says if there’s one advice she would give to parents of disabled children, it is that children should be given as much exposure as possible from a young age.

“A lot of times, parents hesitate due to societal perceptions or the logistical hassle, because it is not easy for them to move around. But, giving these children exposure at an early age is the best thing you can do as it increases their confidence to survive in a regular world.”

Besides teaching and building awareness, Ramya’s latest passion is cooking and art & craft. “My left hand is very strong, I can cut vegetables and cook, and also work on paper crafts. I’m very handy in the kitchen. The only things I cannot make are chapatis and ragi muddes,” Ramya laughs.

(This story has been updated to correct factual errors)