The only factor that dictates a woman’s ability to lead is her knowing she can do it: EdelGive Foundation CEO Naghma Mulla 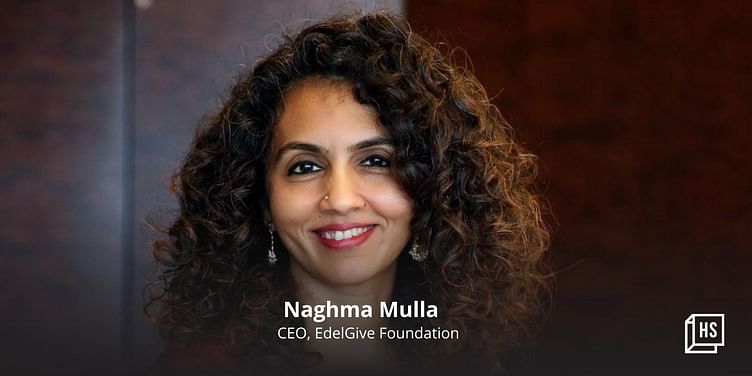 In this week's Women in Leadership series, we speak to Naghma Mulla, who is the Chief Executive Officer (CEO) of the EdelGive Foundation. She is also a member of the Board of Directors at the organisation.

Over the last ten years, Naghma Mulla, CEO, EdelGive Foundation has enabled growth at various organisations supported by the foundation.

Having qualified as a CA when she was 22, Naghma started her career with an insurance firm. However, in a few years’ time, she knew she was in the wrong sector.

Speaking to HerStory, Mumbai-based Naghma recounts the time she left her well-paying job as a CA, and how she accidentally landed a role in the development sector.

“I had plotted this one-kilometre road around my house and decided to walk into every office and see what they do. I decided to meet people in person and give them a handwritten cover letter,” says Naghma. The only agenda at that time was “to find something that I feel good about at the end of the day.”

The gamble paid off as Naghma happened to walk into the financial services company Edelweiss.

“They interviewed me for a finance role, and I appealed to them that while I can do that really well, finance is not something I'm going to enjoy.” She left, but not before asking them to call her if they had anything different to offer.

“Thankfully, they liked me enough to call me when they were thinking of someone in India for ﻿EdelGive﻿,” says Naghma. That was 10 years ago.

Excerpts from an insightful conversation -

HerStory (HS): Take us through a brief journey of your professional life.

Naghma Mulla (NM): I am a Bombay girl, and most of my life has been here apart from maybe a couple of years in Delhi and Pune. I come from a typical middle-class family where I studied chartered accountancy. However, I was a very reluctant chartered accountant. I loved studying for it but hated working for it.

When I started working, and when I didn't enjoy working as a CA, it was quite a shocker. I was also married by then, so the realisation hit very hard that I could really enjoy learning about something but working at it is not something that excites me.

And that's when I decided that I will use the privilege that I have of being able to drop out of that job and seek what I really wanted to do. I took that up and finding the development sector, finding EdelGive has been a remarkable accident.

HS: When you joined EdelGive, what was your role?

NM: I joined as a manager. EdelGive was just a young foundation then but the mandate was very clear. They still had to put processes, systems, and methodologies out there. And so I may not have had an understanding of the development sector but I did understand structures.

I think it also takes a good leader to be able to give that room to grow, and for me, that leader was Vidya Shah, who was the CEO of EdelGive at the time. She is now the Chairperson.

HS: It’s been 10 years since you joined them, and you are now the CEO of EdelGive. Tell us about your current roles and responsibilities and what you enjoy the most.

NM: When I joined, I was just looking at the grant-making, as we had about 15 grants spread out across the country.

Vidya and the other leaders gave me the free space to work for the sector and not just for EdelGive, and to build from there. The clear mandate was to bridge the capital gap, bridge the resource gap between the for-profit and non-profit.

We now have five collaborative fund structures, which are able to do at least 10X the work that EdelGive would have done in itself to be able to bring social context into every grant that we do. This has been brilliant.

HS: What is UdyamStree? And, from your experience of working and enabling women entrepreneurs, what were some of the challenges as well as successes?

NM: UdyamStree addresses one of the major problems that we have seen–that is the solutions that were provided were not reaching all the stakeholders.

It is a misconception that women are absent by choice, all that women need is an open door. UdyamStree became a research-backed communication work that we worked on for over two years, where we basically began with why we have fewer women entrepreneurs, why is only 18% of India's entrepreneur GDP contributed to by women.

We had to understand the WHYs and from there create a media outreach, which can be consumed by people.

The unexpected successes were how quickly the UdyamStree messaging caught on the popular imagination through Instagram and LinkedIn. We blended positive messaging with film culture and the younger generation took note.

The other piece that was remarkable is the podcast series, because wherever a woman entrepreneur was interviewed in small towns or villages, she became a bit of a local celebrity. And, her story became the story for so many other viewers.

For women to succeed as entrepreneurs, systems must be redesigned to retain them, not just allow entry

HS: What factors impact a woman's ability to lead others?

NM: There is of course the emotional quotient but, you know, I've had enough time to think about this over 10 years. And I think the only thing that I would pin down is women knowing that they can do it.

As a society, we are told in subtle, loud, obvious, and, and camouflaged ways that we can't do it. There is such concretised discouragement at every level that by the time we are at a stage where decisions have to be made, the first hesitation comes from the self.

I don't even think that women are better than men or otherwise. I think there can exist a beautiful synergy between all genders, and it takes many to make this world. But the fact is that there is so much baggage that we women don't even know that we can do it.

HS:  What do you think is the most significant barrier to female leadership?

NM: One of my favourite NGO leaders had said that if a barrier has been overcome, then it was never a barrier. But if I were to pick a couple, I would say it is the stereotypes and the assumptions, which are a bit tiring.

If you see the work that EdelGive does, it is pushing against a lot of the myths that are out there–like NGOs don't have robust systems, or that NGOs are not the most efficient, and that funders are all apathetic. I beg to differ.

People are inherently good, and we just have to figure out an ecosystem where they can speak to each other and understand each other.

HS: How do you do the balancing act between your personal life and professional life, especially given the role you are in?

NM: I think it begins with shedding a lot of our training, and it starts with home. If you want work-home balance, as I call it, then the home has to also be tuned into it.

It can’t be that just one person is responsible for the meal on the table. There needs to be a natural, you know, almost a relay between the spouse and yourself. That means the setting of those norms has to be from the beginning. If the home does not support, you can only fly so much.