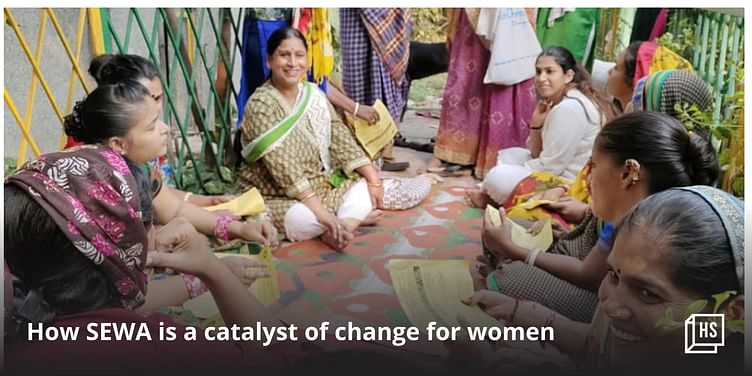 For 37-year-old Khushboo Gupta, disaster struck in 2020, when COVID-related lockdowns forced her husband’s business of reselling plastic bags to come to a grinding halt. A mother of three, Gupta is one of India’s 9.7 crore women concentrated in home-based, domestic, construction, and street vending work.

For Gupta, help beckoned in the form of the Self Employed Women’s Association (SEWA), a membership-based collective she joined in 2020 that organises 21 lakh women in the informal economy.

Today, with SEWA’s support, she has her own sewing machine and works eight hours a day, earning about Rs 3500-4000 a month – a significant contributor to her family’s income. She has access to government social security with an account at SEWA’s cooperative savings bank, where she invests monthly. Her husband supports her endeavours, and she is respected as an agewan ben (leader of other women) in her community.

Data show that 50 percent[1] of registered informal workers are women, though estimates suggest women form only 23 percent of India’s total informal workforce.[2] Women informal workers receive less than half[3] of male informal wage rates, primarily in domestic and home-based work, and nearly half are the sole breadwinners in their families – while they devote significant additional time to household, child, and elder care.[4]

Additionally, they face challenges in accessing public and social infrastructure as well as safety and mental health concerns.[5]

Evidence indicates that if women informal workers organise themselves, it gives them strength, solidarity, and courage.[6] SEWA, one of the country’s largest women-led organizations, exemplifies the mindsets and pathways The Bridgespan Group has documented in its report on community-driven change. In this approach, local groups actively participate in – often by leading and owning – the design, delivery, and governance of solutions for social change.

SEWA’s community-driven approach addresses gender equity in multiple ways. By organising workers to target structures that maintain and uphold inequality (such as systems and markets), enabling creation of assets for earning a livelihood, and transforming gender roles through empowerment and promoting gender-equitable relationships, the organisation fosters sustainable change through the power of collective support. This approach is able to address systemic issues like patriarchy and social norms that limit the effectiveness of assistance-based progammes (as described in Bridgespan’s report on the power and promise of feminist movements).

Last October, Bridgespan spoke with Gupta; Sona Ashokbai Samtani, an 81-year-old street vendor and third-generation SEWA member; and Kamla Haldar, a 62-year-old domestic worker and board member at the union. The trio talked about the changes they’ve witnessed in their lives and communities as a result of work with SEWA, which we summarise below. This article also incorporates learning from conversations with many other SEWA members.

There are roughly 30,000 women street vendors (about a third of total street vendors[7]) dispersed across Delhi.[8] SEWA Delhi has organised 8,300 of these women, enabling them to sell their wares across five worksites. The union’s efforts co-enabled a landmark win for the entire community, the Street Vendors (Protection of Livelihood and Regulation of Street Vending) Act of 2014. “In 2013 and 2014, we rallied together at Jantar Mantar and outside several politicians’ homes. Eventually, the street vendors bill was passed,” Samtani declared. “Now we are getting licenses.”

SEWA members carry a vending certificate, which protects them from harassment or eviction, and are able to work and earn more – generally seeing a 30 percent hike in monthly profits.[9] “First the police wouldn’t listen, [but] now [when] we say that we are from SEWA, then they give us time for a meeting,” shared the proud octogenarian.

SEWA has been rallying policy efforts, calling on the government to recognise the rights of informal workers and demanding a uniform national minimum wage.[10] Women make up about two-thirds[11] of the five lakh domestic workers in Delhi. SEWA’s union liaises with employers of domestic workers in Delhi to standardise pay and create accountability towards employment policies. They have conducted 14 “My Fair Home” campaigns, putting up information kiosks in residential areas to inform employers about domestic-worker rights, and, as an initial step towards better earnings, created standardised rate charts for skilled and semi-skilled work.

SEWA works with 50,000 home-based workers in Delhi, providing training on tailoring, embroidery, and fashion design, equipping them with vocational skills, and linking them to the many garment and textile units in Delhi. “We are not dependent anymore. We are able to earn enough money for our own bangles and bindis,” declared Gupta. Approximately 350 women from this group are employed with SEWA’s own producer company, Ruaab, which works directly with brands and consumers, eliminating middlemen and helping to ensure secure livelihoods.

SEWA has also fostered a ground-up solution for financial inclusion and creation of assets though the Mahila SEWA Urban Cooperative Thrift and Credit Society, which now handles the savings of over 8,000 women and provides loans at 1.5 percent per month to purchase assets like sewing machines.

SEWA members have been able to establish their identity, assert their independence, and draw on collective power to tackle challenges. “First, I was someone’s mother or someone’s wife. Now, I am a worker,” Gupta said. “I have my own identity and name.” The union serves as their backbone, lending collective strength in cases of ill treatment at the hands of employers and even at home. “There has been a big change,” she added. “There used to be many divorces … now they fear they will be reported to the mahila mandal [SEWA’s local women’s social service group]. Now, whenever we have any domestic issue or any problem whatsoever, we find our solutions.”

SEWA also fosters leadership, training members to represent the collective goals and needs of women in their communities. These agewans are trained in skills to build and lead movements. Sixty percent of SEWA’s leadership is elected from groups of local leaders.

SEWA members are increasingly able to negotiate with their families and claim social spaces. “They can suppress us, alone, but [now] 10 of us can confront them,” Haldar shared. They delight in the recognition they now enjoy in society. “Earlier, I didn’t even step out of my house,” said a beaming Gupta. “Slowly, 300 to 400 people here have got to know me. My family says I can do anything.”

At the heart of change is ownership. SEWA’s multi-pronged community-driven approach has lent women the faith that gender roles can indeed change. It’s this faith that helps them dream of new goals and gives them courage. When women drive their own change, communities advance towards disrupting the intergenerational cycle of inequality.