Google Flutter – what is it, and how to use it for cross-platform app creation 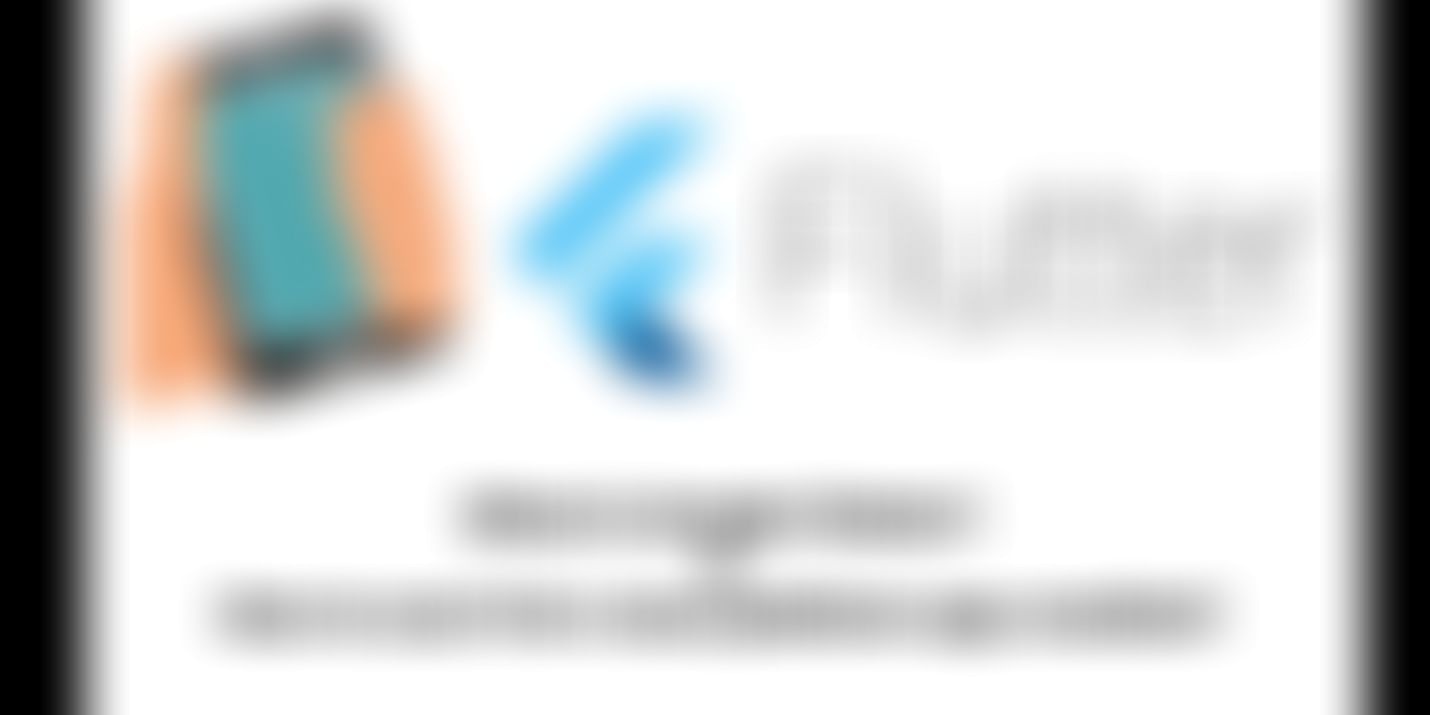 In this article i have explained about Google flutter what is it and how we can build a cross platform app using google flutter. 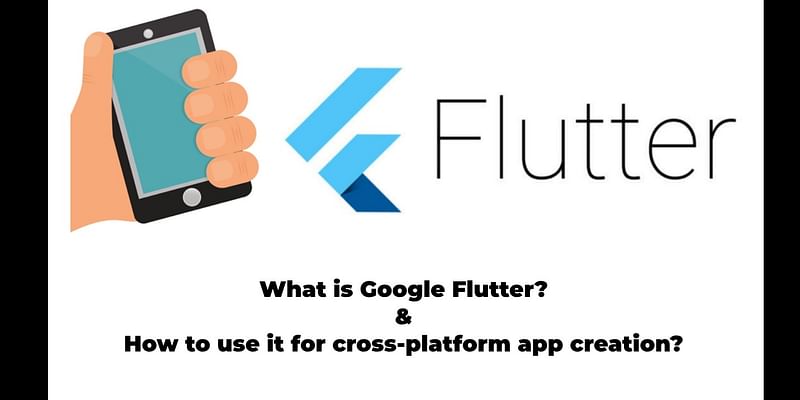 What is Google Flutter & How to use it ?

When it comes to building new mobile apps, mobile app development companies do not restrict themselves to only a single platform. They venture out into a different platform to be a long-term market player in both the fields, Android and iOS.

Most companies today have devised tools to ensure both these platforms do not require individual coding patterns. All the coding can be done in one go, no matter the platform.

With all this and more, mobile app development companies have come a long way. They are always welcoming new changes and developments in the field. Most of these changes come from tech giants, Google.

Google dominates the world of mobile app development. Grey cells at Google offer us with extraordinary solutions to our ordinary life. Be it their revolutions to the world of calendars, Emails, contacts, anything and everything, Google has been making our lives richer every single day. Google recently came up with a new revolution to the tech world.

So what exactly is Google Flutter?

Flutter  is Google’s technical advancement designed to build better mobile apps in an economical way. Flutter basically caters to the rising need of cross-platform native mobile apps. Though not first of a kind, Flutter is used by Google as a revolutionary platform for developing better and feasible apps.

Flutter is basically a mobile app SDK which is power packed with its own set of frameworks, its widgets, and its tools. As a mobile app development company, you can be sure that Flutter is going to help you develop easy and productive mobile apps for both Android as well as iOS platforms.

The best part about it? It is dramatically going to reduce the cost of mobile app development along with reducing any form of complexity in the production process.

What does Flutter do?

It’s pretty simple. For people who are going to use Flutter, it will give you versatile mobile app interfaces.

For the people who use Flutter as developers, it is going to lower the entry bar for building mobile apps. It will help pace up the development stage in the long run along with reducing the costs and complexities.

For designers, Flutter will help you deliver accurate designing aspects without compromising on anything.

Why should you be using Google Flutter?

As a mobile app developer, you should invest your time and your energy in Flutter for multiple reasons. From speedy app development process, cost-effectivity, to the spectacular visuals it provides, you get everything you ask for! The in-built Flutter tools will allow marvelous results, even if you are a novice player in the market.

The one of a kind app development tool is going to help you change your mobile app development journey in the long run. It can be used by developers all across the globe as a free and an open source platform.

Do you want another reason?

1) You get faster app development

Flutter is an amazing way to bring your apps to life in the quickest manner. The tools work on all platforms in a personalized way, which help you get the job done quickly and perfectly.

2) You are free to choose

Flutter gives you the power of making free decisions. Since the platform is built on a very thin layer of C/C++ , as a developer you can easily change any aspect of the language and remove or replace different aspects as well.

You can quickly make decisions on composting, gesturing, animating, widgets, etc. As a mobile app developer, you will hold all the powers and controls to building mobile apps efficiently.

Flutter, as we have repeatedly said is an open source platform which helps generate reliable and quality mobile apps for Android and iOS. Apart from this, Flutter also provides beautiful interface development, by decreasing the amount of coding needed for the app interface.

The basic set of designs available on the platform allow you to make the app building process easy, fun, simple, yet beautiful. It provides with immense choices for navigation patterns, scrolling, fonts, etc.

Flutter being a newer platform helps you design the most modern layouts and widgets, giving you an elegant user interface. The platform is flexible allows you to play with everything to make your results fun and personalized.

Moreover, you can channel your creative and productive side to make something which appeals to the eyes, equally functional. You get all major benefits of creativity, functionality, tools and frameworks and rich library sources.

Flutter enhances your app development experience like no other platform. Unlike other 3rd party platforms, Flutter allows you to access all native features and SDKs on all platforms. It will allow you to also reuse your existing Java and Swift codes which makes everything approachable and accessible.

The rich and elaborate tools and libraries on Flutter allow people to implement and produce all kinds of app ideas, be it for an Android platform, or for an iOS platform.

You do not require numerous years of experience for working on the platform, nor do you have to be an expert to do the same. You can garner benefits easily even if you are new in the market.

As a cross-platform SDK, Google Flutter helps you strategize your codes for both Android and iOS platforms. For the same, it is a neat platform. Flutter does not require you to compile native Android and iOS apps directly, rather they are going to run on a Flutter engine and Flutter framework.

While the Flutter engine is written in C++, the Flutter Framework is written in Dart. Both, the engine and the framework get bundled up with each and every mobile app. Each app development process gets its own package, custom-made.

All in all, you are not just getting your mobile app, but you are also ultimately getting your new engine to run your codes on and your native codes to get your apps made on Flutter to run on Android and iOS.

Flutter is, therefore, somewhat like a video game. Just like a video game tends to ignore most other application frameworks and tend to provide assistance with their own engines to serve for the same, Flutter too does the same.

Flutter does not seek the help of already existing framework engines but comes power packed with its own framework. It tends to ship an engine for each app to be developed. This, however, does increase the installation size of your app.

Though said to be an ‘empty’ app, Flutter does add around 6 MBs to your app on Android platform. You are adding all of this to your final app. However, the benefit of an app developed is that is surely is going to be fast. It can hit up to 60 FPS when made from scratch.

This might not be revolutionary for iOS, it is a great deal for an Android platform. Moreover, you can also sidestep most fragment issues on Android, obviously because you are shipping the whole platform along with your mobile app.

This is why Flutter apps feel and appear different in comparison to other mobile apps. Flutter is going to change your scrolling patterns, your buttons, your sliders, loading times and spinners, dialog boxes, and much more.

This is the prime reason why Flutter apps appear fresh. However, you can still manage to make it look like a native app, without making a lot many efforts.

Despite the Beta tag on Google Flutter, it is being used to produce several mobile apps. The well-known names made out of the Flutter platform is Google AdWords. It is one of the premium advertising platforms in the market today.

Flutter might be a new player in the market, but it seems to be very reliable and highly promising. Not just because it’s part of the notable Google family, but also because of the features and benefits, we stated above! You get something new and something fresh, each time you get on the platform for app development.

You can get the best of both worlds - Android and iOS and save your time, money and energy. This efficient platform is the single best investment you should definitely make! You won’t regret it.