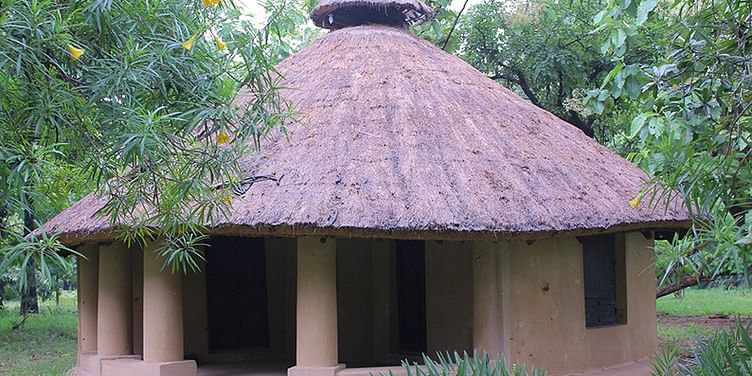 Then a few days were extended of the Kolkata trip, Shantiniketan was in first in my list to visit. So I planned a whole day to go around for Tagore’s Shantiniketan. There are a lot of trains that run daily from Kolkata and Sealdah to Bholpur so I took in one of the trains to Bholpur early morning from Kolkata.

With a small bottle of Maaza and a sandwich for breakfast, I headed to for a new day of adventure. It was an intercity which took an extended time of 30 minute to reach Bholpur and on the way, the scenic beauty was similar to that of Kerala. The paddy fields and the coconut trees are what caused the similar feeling. I had read somewhere that West Bengal and Kerala have a lot of similarities and I witnessed them on the way to Bholpur.

The weather was comparatively pleasant when compared to other days. When the train reached Bholpur, there was a long line of cycle rickshaw’s waiting for passengers. First he was to drop me at Shantiniketan and later on the way 4km to shantiniketan the price he quoted reached to 200 for sightseeing and dropping me back to station. I reaching Shantiniketan, and I felt like the bargain I made was extremely fruitful. As he started cycling through the mud roads of Shantiniketan I felt there was nothing like it while I saw the library, hostels and classrooms on each side. 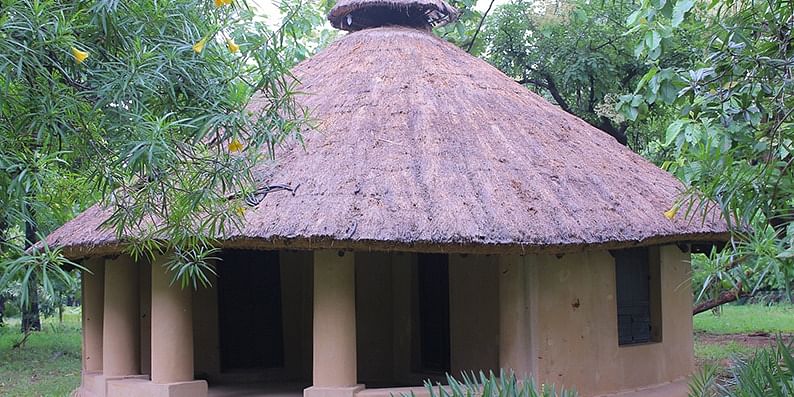 Our first stop was the picture gallery which had an entry fee of Rs.10. It held the story of Shantiniketan. It was made in the 1960’s. Rabindranath Tagore's father Maharshi Debendranath Tagore found place amidst beauty and luxury of Chhatim trees. It seems perfect for him meditation. Later he bought the land and planted some saplings around it. At that time the place was known as Bhubandanga but Rabindranath Tagore’s father renamed it Shanthinikethan which means Abode of Peace. Later after a year, he started a spiritual centre there and people started coming there from all religions and caste meditation.

Debendranath Tagore’s son Rabindranath was one of most knowledgeable literary genius India ever saw. While early educators thought about a global village, he envisioned an education that helps one connect with individual's immediate surroundings and with a wider world.

With these thoughts in mind, he started the school with five students and equal number of teachers. One of the students was his elder son. He named it Brahmacharya Ashram. The school was located at the heart of nature and during the break hours the kids were allowed to run around and climb up the trees. Nature walks and excursions was part of curriculum.

When Tagore was awarded with the Nobel Prize for his Gitanjali, it also enhanced the prestige of Shantiniketan. Then he turned the little school into a University called Viswa Bharathi. It offered almost all courses which include arts, humanities, science, social science, music, agriculture, performing arts, and rural reconstruction. Its arts college is one of the best in entire world.

Tagore’s legacy protects Bengal’s fast disappearing culture, crafts and arts through its weekly markets and yearly festivals. The classrooms in the campus are till you can see which is under some tree away from the concrete forests. There was a building where Indira Gandhi used to stay during her tenure at the university. There were a lot of students roaming during my visit.

In a corner when I found a post office didn’t forget to post few postcards to the friends who reminded me in each message to send them postcards wherever I go.

Rabindranath Tagore’s father’s house is still there but it’s not accessible to public. My tour through the campus got over in two hour and my rikshawala started cycling back to railway station. This time I started asking him about himself. I still don’t remember his name nor had I asked. My ride was one of the first rides for him this week and he has sister whose marriage is fixed and he is running around to collect for a dowry of 60000. His father was also a rickshaw driver and died few years ago and now his mother is not also well. Once this ride got over, he had to go back home with the money I give and make something for her to eat. I was felt sick from what I heared and was thinking about how he could handle the whole family and still collect for a dowry simultaniously.

Then I asked whether she had attended school? And answer was quiet heartbreaking. He tried to get an admission for her in a government school and the principal asked a bribe of Rs. 1000 for a seat. He was not capable of paying it and that ended their dream for an education. He dint eve try that for himself. There was long silence between us after that, till I reach the station. I was thinking what could be a good solution to their problem? Money of Education? But none seems like a solution. If education was a solution, there would not be any deaths of brides from poor family in Kerala for the sake of Dowry. Because Kerala is highly literate. I could help him for his current needs but later, he may still have problems that I might not be able to help him with.

While paying for him an added Rs. 100 to the cost we had decided upon and before leaving, I told him when he has kids, to try and give them a good education. He smiled showing his nonaligned teeth. When I get a train back to Kolkata it was the rikshawala who was running in my mind, not the Abode of learning.