A.I and Space a 21st-century combination 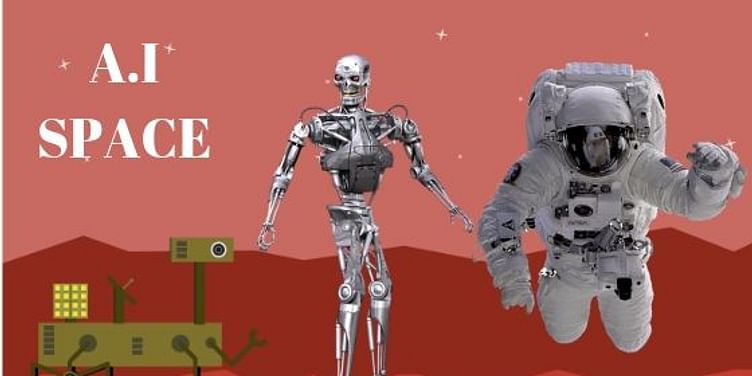 What a wonderful century we live in now. The world was never so connected as it is today the technology advancement is on the peak.

A.I has distinguished itself from different advancement and has made its name as one of the trendy topics of this century. I am very much sure you would have heard the term A.I in News, Magazine or a discussion with your tech enthusiastic friend.

People have a very mixed perspective of A.I some people are very optimistic about this technology which can make a massive difference in the fourth industrial revolution. And some are frightened of this technology that it will destroy humanity.

What if I say that A.I Buzz is not a new term, but it has been around for almost 70 years. Surprise?

The idea of evil machines taking over our world is not new but has been popularized in the last few decades by Hollywood movies such as The Matrix, Blade Runner, A.I Artificial Intelligence.

Do you know the first movie which talks about robots was almost a century-old Metropolis was released in the year 1927.

World war 2 was a trigger for many technologies advancement and one of which was intelligent machines which were used by the military to produce weapons and increase the production of the military essential at a fast pace.

But it was Isaac Asimov who first introduce intelligent machines to the common people in the year 1950 in his book ROBOTS.

It was one of the best scientific investigates in machine learning and future predictions of the technology.

The term Artificial Intelligence originated in summer conference at Dartmouth University and was first proposed by John McCarthy.

Do you know the most influential man in computer algorithm history is Marvin Minsky who had already predicted the growth of A.I many decades ago.

he also proposed a plan to govern machines with safety norms which are pre-programmed to restrict the machines ability to outperform its commands.

Marvin Minsky also influences Stanley Kubrick to create the masterpiece of the decade 2001: a space odyssey which featured the idea of Supercomputer called HAL 9000.

The first official breakthrough for smart machines came in the year 1969 with SHAKEY THE ROBOT which was one advanced robot of its time and can perform various basic tasks.

But after SHAKEY not many developments happen in smart machines. Because the industry in 1973 was crippling and unstable due to lack of funding by us government.

A lot of capital was invested by the government in funding research and development but the U.S government was not satisfied with the desired output. They decided to pull out and stop funding in such machines.

A great deal of instability ended for A.I in the year 1983. Because at that time big corporations started using machines commercially to perform a narrow task which requires programming and A.I.

The capital from the private industries opens many doors for exploration of this technology in Medical, Education, and Space.

In 1997 a historic fight happened between Machine and Human which was observed by the governments from all over the world.

The IBM built Supercomputer which could think 200 million positions within a second in chess, overwhelmingly defeated the renowned chess champion, Garry Kasparov.

From basic machine to surgical robots we have come very far today A.I has become a part of our society.  A mean truly, the famous robot Sophia became the first machine to get citizenship of a nation. It enjoys the same rights as humans.

Space was the glory and pride of nations; millions of dollars were poured in to send their rockets out in space.

A space race between the then superpower U.S.A and U.S.S.R was one of the costliest and deadly periods. Many astronauts have lost their lives in the pride battle.

U.S.S.R eventually succeeded and send the first living creature in the space a dog and made their name in history.

But the U.S.A shocked the whole world when they created a history which will be remembered till humanity by sending a human to the moon.

Sending man on the moon changed everything, from how we look into the space for falling stars to conquering planets this ambitious vision of human has opened many doors for further explorations of cosmos.

The capitalization of space by satellite has changed the world completely, now we can broadcast anything from any region to all over the world.

We can predict a natural disaster and prevent it. we can see the future by whether updates.

Media corporations have flooded the space with satellites and have virtually capitalized the earth orbit.

Space exploration is exciting but also very expensive to send something weight of 1kg can cost you more than $3000 and that's the best you can get for now.

But this is changing at a very fast pace, Entrepreneur like Elon musk is bringing revolution in space exploration. He is proposing the idea of reusable rockets. His company space x has been developing and testing rocket which can be used for multiple times.

The idea of reusing rockets can cut down the cost to about 95 percent which can make space affordable and can bring innovation.

The private space agency Space x and his founder Elon musk have inspired many private startups from all over the globe.

One such private space company is the Chinese startup Linkspace which is prepared to test their reusable rockets this year.

World's richest man has also shown a lot of interest in space exploration. Jeff Bezos the founder of amazon.com, In the past few years invested billions in his space agency BLUE ORIGIN.

He is very optimistic about this technology and plans to invest many more billions in the future.

As competition in space increases this bring affordability of space exploration to many more entrepreneurs.

Not only private companies which are trying their luck in space money-making, but also many governments have heavily invested their capital for research and finding resources in space.

The Indian space agency ISRO has made history by sending 104 satellites in space in one launch which broke the previous records by the Russians of 37 rockets.

Mass production and constant exploration are making the space more affordable for countries and private individuals. This space race is bringing innovation and curiosity to millions.

The famous innovator entrepreneur Elon Musk and his company neuralink has been testing of human brain implant for installing a chip inside your head.

Through this, you can control a lot of devices by just thinking in your mind. You can higher or lower the music of your headset. In short, you can perform magic with your mind.

We are now in a time in which science fiction has now become a reality. There is a lot of research going on to create a sub-human from robots.

Many believe this technology of Machine & Human biological integration can eliminate all the limitations which a human body face.

Maybe it's possible to live on Jupiter, not by humans but sub-humans who has endless power and freedom from nature limitation.

Human effort and evolution of us from wild

Long ago some millions of years back a species roaming around the flat plains of Africa barely surviving in nature with a lot of dangerous situations which can anytime end the existence of his species.

Yes, I am talking about the homo-sapiens and their evolution. How come we humans have made this astonishing achievement of surviving nature.

Our ancestor has made a lot of efforts and generations of people had spend their life to shape the world as it is today.

They have achieved something impossible, just think about the time when there was no language, society they migrated and evolve for better throughout the globe.

It is the beauty that how this creature has conquered nature.

And the same species made many technological advancements in earth and space in modern times.

Our ancestor has done the hardest part of pushing us for further conquering the space, by the gift of their knowledge about Physics, Maths, Nature, Space.

Now we have the vision of our ancestors of exploring and not stopping. They have completed level one successfully, they have won in exploring their vision and mindset of the future.

We must carry forward the biggest blessing of the humanity of exploring the unknown. We should be curious and appreciate the mysteries in space exploration.

We should further develop and carry on level two and complete it, to gift our next generation with curiosity and expectations of level three, For further improvement of humanity.

Our space hides trillions of dollars of wealth in forms of precious metals. And it is not a secret to the world. that's why a lot of people want to invest in the space industry and its future looks very bright.

Entrepreneur's from all over the world are very much excited as many funding opportunities are increasing from both government and the private sector.

Many wealthy businessmen are interested in investing billions in space mining. They are willingly ready to take a risk to get massive returns in the future.

This attraction for fast returns has also interested many common people who are willing to crowdfund mining projects. It will create a lot of capital for space exploration.

United States government is also heavily investing in space mining for extraction of resources. A study suggests a single meteorite could have been storing precious metal worth billions of dollars.

Different governments from all over the world have shown massive interest in extracting these trillions of dollars of resources from space.

Is there a possibility of space war?  Probably not soon.

There is a treaty which governs international space law called outer space treaty which came into existence in 1967.

The treaty clarifies that no destruction shall happen in outer space and no country own outer space.

Our space has an abundance of wealth in the form of precious metals and energy.

These resources attract many nations. And the greed for trillions of dollars can create conflict between different country for resources extraction.

A priority of dollar, not humanity

Many agreements had been canceled in the past for nations interests. The agreements between countries won't assure that a space war won’t happen but still, it gives hope for peace.

Have you ever wanted to be an astronaut and swim in space? This may become a reality as space-traveling getting affordable more and more people are showing interest in fulfilling their dreams.

Many private space agencies are already giving tourism in gravity-free experience in lower earth orbit. It won't take long when we will go on the moon for our honeymoon. That's very cliche.

There are lots of startups which are integrating A.I and space to give you have a virtual experience of being on the moon surface with real-time 360 visuals directly from space.

A lot of directors are optimistic about filming in space and create documentaries and movies which have the most stunning real visuals of space and planets.

Maybe the next Guardian of the galaxy and Star Wars could be shoot in the space?