THE TWELVE COOL PRINCIPLES OF ANIMATION

Animation as a genre of film traces its roots to the twentieth century, when it was pioneered by The Walt Disney Company.

Animation as a genre of films traces its roots to the twentieth century when it was pioneered by The Walt Disney Company.

As the decades passed and Disney’s procedures of animation were adopted by filmmakers around the world, two of the company's animators’, Ollie Johnston and Frank Thomas, published a book discussing the twelve principles of animation.

This book has since been referred to as the Bible of animation, and these principles adopted by studios worldwide.

In addition to guidelines for producing realistic and aesthetically pleasing animations, the principles also deal with abstract aspects such as timing to evoke emotion, and character appeal.

1. Stretch and Squash: Adding stretch and squash in an object highlights its weight and flexibility.

When an object has an impact with any surface or substance, or reaches the peak of movement in a particular direction before starting to move in the opposite direction, there is a squash or squeezing effect.

Conversely, during movement and rebound, there is a stretching effect.

It is important to note that for realistic animation, the volume of the object remains unchanged in both cases; if the height reduces, width must increase proportionally and vice versa.

This principle is seen in real life when one undertakes a jumping movement, or by a horse when it is galloping.

2. Anticipation: Before an action begins, an object or character usually takes some preparatory steps.

For instance, to type on a keyboard, a person raises their finger above the key that will be struck.

This is anticipation, and it serves to signal the viewer that and action is about to take place.

A football player, for example, moves his foot backwards to gain force for the actual action of the kick.

It is also used in less physical ways, such as changing the direction of focus of a character off the scene in the frame to signal the arrival of a new character.

Typically, the movement of anticipation occurs in the opposite direction of that of the action that it anticipates in order to create contrast.

3. Staging: Staging means the placement of characters and objects in a manner that ensures that the action, mood and personality traits are clear to the viewer.

As a rule of thumb, in classical animated films, characters and objects are posed in a way that the action can be understood even if it was in silhouette.

This ensures that the audience’s focus stays on what is relevant or, can serve to draw attention away from other aspects of the action.

4. Straight-Ahead and Pose-to-Pose: Moving on to the actual animation, there are two techniques used.

In the straight-ahead method, a scene is drawn out (or, in the case of 3D animation, poses are set) frame by frame as the action will occur.

While the technique creates more fluid, realistic motion if done properly, it is difficult to maintain proportion and create strong poses along the way. In the pose-to-pose method, the main or key poses of an action are blocked (or drawn) after which in-between movements connecting one pose to another are made.

This method works better for dramatic scenes where composition has an important role.

5. Follow-through and Ooverlapping action: Going back to the earlier example of a galloping horse, imagine what would happen if the rider urged to horse to halt.

It would slow down and stop running, but the mane and tail will move forward some more before settling in their normal position.

This is called follow-through and overlap; in more technical terms, it is a representation of the laws of physics – most significantly those of drag and inertia.

When the horse is in motion, the tail and mane follow behind it due to drag and after the horse comes to a stop, they continue the motion due to inertia.

The additional distance they cover before settling is the overlap. Follow through and overlap occurs wherever there is a flexible or jointed body in motion.

6. Slow-in and Slow-out: Most objects tend to need some time to reach full speed of action, and then decelerate when the action is coming to an end.

This is the purpose of adding a slow-out at the start of the action to show acceleration, and a slow-in at the end of an action.

To show impacts and bounce (for example a ball bouncing offs the floor) we use fast-in and fast-out. In both cases, there are more poses at the start and end of the action than in the middle.

7. Arc of Motion: Typically, movement occurs along arced paths rather than truly straight ones.

This is emphasized in animation by creating all movements in fluid arcs.

Faster actions use wider and flatter arcs, while slower movements can follow sharper arcs. Any action that does not follow an arc tends to appear erratic or jerky.

8. Secondary Aactions: When we walk, we usually tend to swing our hands, or look around. As our thoughts change, so do our expressions.

The mane and tail of the galloping horse follow the up and down movement of the body with some delay. All these add to an action and make it seem more realistic and lively.

9. Timing: Simply put, timing is the number of frames allotted for a certain action.

If an action is timed correctly, it will appear to follow the laws of physics and be believable.

Timing, therefore, is a crucial aspect for establishing the subtle moods or background of an action.

10. Exaggeration: This involves depicting actions in a more extreme manner because completely realistic animation can seem dull and static.

In addition to making actions more interesting to the audience, exaggeration also ensures that the viewer can understand what is happening.

In addition to simply making actions more extreme, exaggeration can also include surreal or supernatural changes in a character or object.

It is important not to overdo it, however, in order to avoid a negative reaction from the viewer.

11. Solid Drawing: Solid - or Proper: Drawing involves making sure that objects have a three-dimensional weight and space in the scene.

In the early days of animation, animators would take thorough training in art before attempting animation.

With the advent of computer animation, this kind of intensive drawing is no longer a necessity.

12. Appeal: Character Design – the way a character looks, acts, moves, speaks and behaves plays a large role in how appealing they will be to an audience.

Similarly, colours and used in the background elements affect the level of appeal a scene will have.

Villains, monsters, scary places – they can all be appealing if the viewer feels that they are real or interesting. 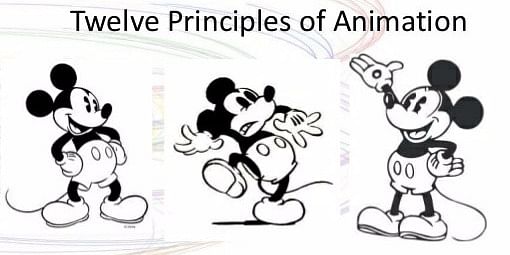