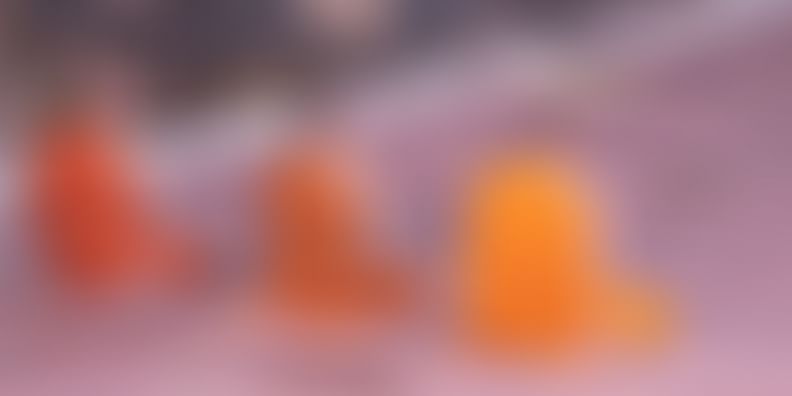 To reach Nalanda I needed to travel again 72km from Bodhgaya. But please don’t be afraid of the kilometer, there are buses running frequently in between. I got a front seat in one of the bus. The buses may write Nalanda or Bihar Shareef in their board. Just to make sure that I get down at right place, I told conductor to tell me when the destination arrived.

The road was stretched out for mile and seemed never ending. There was no turns or curves. In the beginning it was drizzling and then the climate was pleasant. Greenery was on either side of the road. Cattle fields and small villages passed by as our bus picked up its speed. The conductor,the one I told to tell me when Nalanda comes got down on the way. I switched the data on in my mobile and started tracking how long would i take to reach Nalanda. It was getting close and unfortunately I lost the signal somewhere.

Signals and name boards on the way assured me that I missed Nalanda and getting closer to Bihar shareef. Finally the bus stopped in a crowded town and with a market nearby. I asked driver about Nalanda and he was slapping his own forehead saying it was 13km back to from where I am coming. He told me to sit in the same bus and they will drop back but later he got down from the vehicle and checked the nearby bus. I could see that he is talking to other bus people. He came back and told me the other bus will drop me back to Nalanda and it was about to start. I rushed to the bus and got a seat. Till the bus leaves the stand, the other driver was waving at me and repeatedly saying in Hindi that this bus will drop you at Nalanda.

But again I switched on Google Map and as soon as I saw the Nalanda is getting closer I was ready with my back pack to get down but the driver and conductor forgot soon that I was in bus. Few meters away from the actual stop they stopped the bus and reluctant to accept my ticket fare. It was another day to experience Bihari hospitality. More was on its way to the Nalanda. I choose a cycle rickshaw from the long queue of rickshaws on the side of road which leads to Nalanda. 4km was still to go and the driver was an old man with a thin physique. I kept quiet till I reach Nalanda.

When the day started, my back pack was a big question for me. Where to keep it or how to carry it till evening. The solution was made at the moment my old man stopped at Nalanda. His offer was to hire the same auto back to bus stand and he will take care of the luggage till I come back after roaming around. I paused for a second. As long as the wallet, mobile and camera is in my hand I only need to buy few cloths if this man run away with my bag. So it was easy to accept his offer. He showed me the ticket counter to get tickets from.

The long paved way was stretched out till the main entrance and well maintained greenish lawns was adding beauty to the reddish ruins. I was caught by the local guide and the offer was good to take him along.

Nalanda was not built in a stretch but whatever we saw was build by three empires through the centuries. It was world’s largest university with the residential system 2000 teachers and 10000 students. The excavated monuments have 11 monasteries where the students stayed. The whole history about Nalanda was written by the Chinese traveler Hien Tsang during his visit in India. Each monastery have 50 rooms each and in the centre of Monastery there was the class room and a prayer hall. The wall’s thickness was nearly 3 feet which maintain the temperature not so hot and not so hot.

Around the main stupa, there is numerous structures in different sizes. It’s the memorial of students who died during their courses at Nalanda. Big ones are seniors and small are juniors. The entire complex was maintained with a good drainage system. Still when any budhist comes and visit the place use the front area of main stupa to meditate for a while. The opposite lines of Monasteries are temples. The detailed history and sculptures that are found from the excavacated site are exhibited in Archeological museum near to the Nalanda. The art work around such miniature sculptures are real wonders. Many are made with metals. When got out of the Guptha dynasty and their architectural wonders, I remembered about my back pack.

After refreshment I started walking towards where my rickshaw was parked. Before I could spot him, he spotted me. He came closer with rickshaw and started unlocking the chain he wrapped around my bag. I was stupefied to see how he kept my bag and regretted for doubting him. He was saying if he fell asleep, no one will take away my bag from his rickshaw by breaking the chain. Bihar was not what we read in news paper. The care and hospitality was really impressive from what I experienced.

The return journey was filled with a lot of chit chats about my driver’s family and the life at Nalanda. I paid extra few to him and he waited till next bus comes and made sure the conductor will drop me at right place from where I will get buses to Patna. For me I have seen such nice people in my home town only. But Bihar was something else. Their climate, their food and people all you should visit once in a life time. I am sure they will surprise you.

How to reach there and where to stay

Nearest rail head is Gaya and by flight you can land at Patna. You don’t need to stay anywhere if you club Bodhgaya and Patna in your itinerary. You can stay in any of these cities.