Why the Nine-to-Five Working Day has to Go 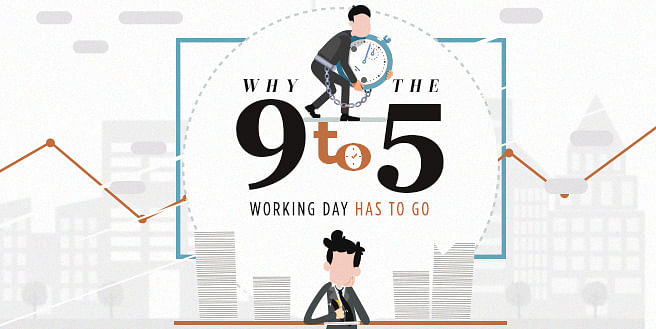 “Without hard work, nothing grows but weeds”

Ever since we were young, we were told that hard work is the price of success. Our parents told us that nothing good comes easy. Our teachers reiterated the same thing, study hard and earn good grades. Though there’s no denying the legitimacy of what hard work can bring, none of us can dismiss the fact that work is predominantly taking over humanity, leaving no room for other things that matter to a happy and healthy life.

An overworked labor force is an epidemic happening all around the world. From countries like Mexico, Costa Rica to Korea. Another major culprit is the United States, with an average workweek of 46.7 hours, meaning that a person who leaves their home at 8 a.m., won’t leave their office until 6 p.m., a whole entire day dedicated to work and sleep, nothing else. And it seems that overworked employees from the Philippines have also reached epidemic proportions.

The Philippine Statistics Association (PSA) reported a 41% increase in the number of overworked employees since the year 1995. By the year 2015, almost 8.1 million people are now working for more than 48 hours in a week. The aforementioned report also noted that having more than the usual hours of work can interfere with the balance of personal life and work. It can also increase injury hazard risks, signal inadequate pay and can pose a long-term threat to a worker’s mental health.

The Price of Hard Work

A Harvard Business Review article on how long working day hours can actually backfire discussed whether overworking actually works or not. In a study conducted by a Boston University Business Professor, managers could not differentiate the output of those who actually worked 80 hours a week and those who only pretended to do so. The professor found no significant evidence to prove whether overworked employees accomplished more and employees who only pretended to work accomplished less.

The aforementioned article also discussed that overworking results affects the company as well. Numerous studies around the world have reported various health issues due to stress, usually involving impaired sleep and memory, diabetes, depression and even heart disease. These health issues are already bad alone but it’s also appalling to the company with the rising health insurance costs. In foresight, overwork is terrible for both parties.

In summary, overwork diminishes our capability to progressively work on tasks that matter.

A Working Day Call for Help

The senator cited the aforementioned PSA report, further elaborating on the matter by citing that during the year 2015, around 8.845 million employed Filipinos are working excessive hours per week – with an overall 4.5 percent increase from the 8.467 million count from the year 2005. She then proposed a review of company policies that require employees to work long hours, an examination of labor laws and passage of legislative acts that can ensure humane work conditions for Filipinos.

The working day call for help has become a global phenomenon as well. All over the world, professionals are asking for flexible work hours that allow them to have more control over their time. More and more young entrepreneurs and startups are opting remote working, revoking traditional ideologies of the 9-to-5 workday. Flexible workspaces have also emerged like coworking spaces to give workers the freedom to dedicate their time to more important matters like family and loved ones.