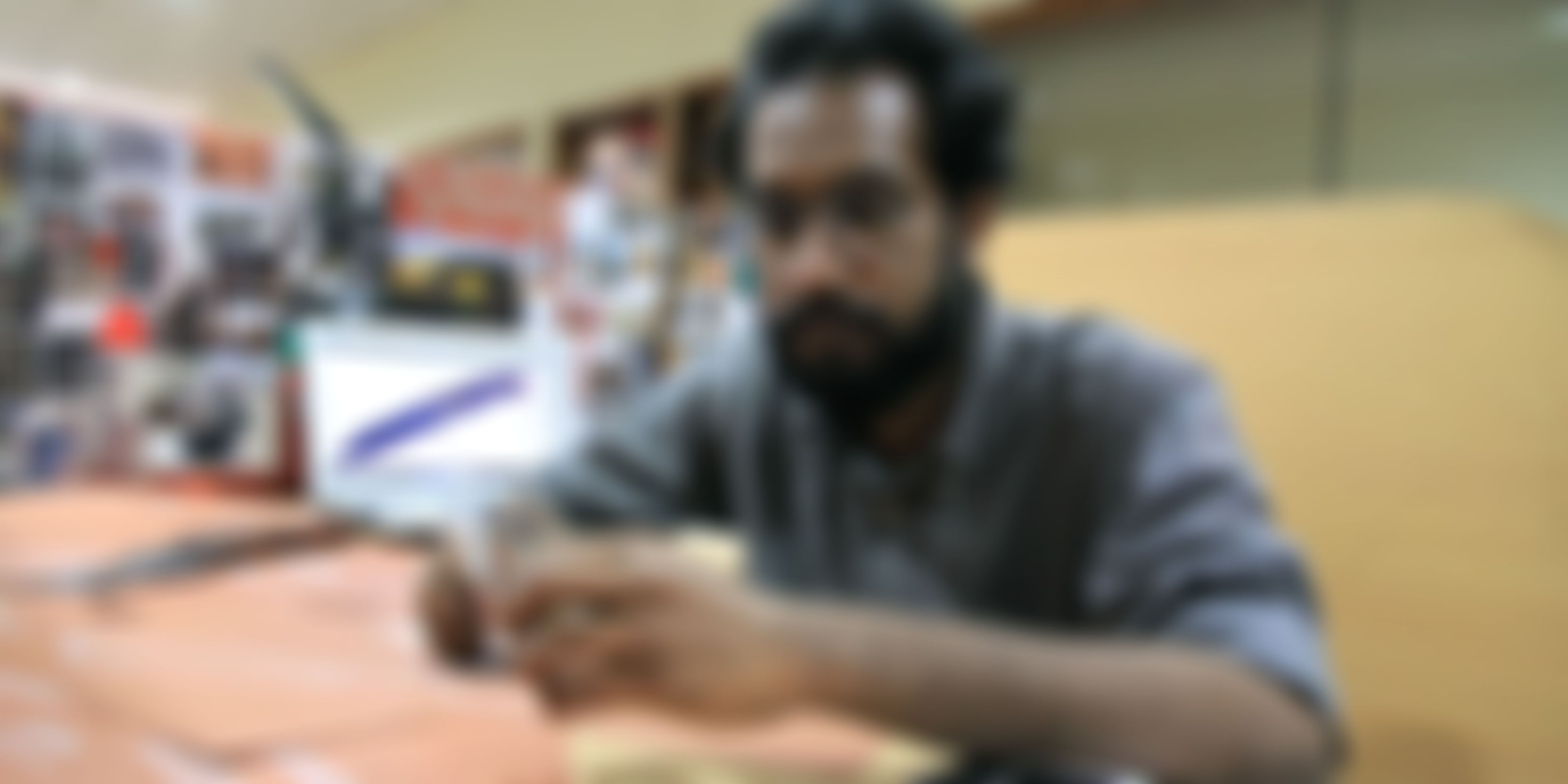 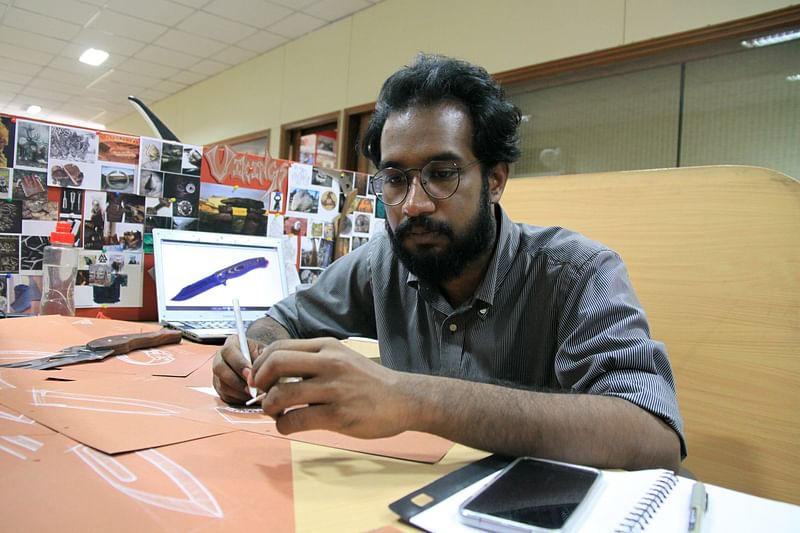 I was always mesmerized with swords and daggers and used to make different kinds of swords, daggers, and similar products in college labs. I was never interested in hardcore product design. While people made software models, I preferred to make real-life models. I loved working in the wood and metal workshop in college, spending days after days working on various models. I had a dream of working at a place where I could design production prop for movies. Basically, I wanted to be a production prop-designer instead of a product designer. To attain this goal, I started to use my college courses as a means to design products of my choice. Faculty opposed me, and students mocked me, but I didn’t give up. Slowly, after seeing the quality of my work, people started appreciating me.

For my summer internship, I knew I wouldn’t get any internship opportunity in production prop-design through my college; so I decided to look for one myself. To my disappointment, even after a lot of research, I couldn’t find a suitable place. One day, while searching for production prop companies in India, I came across one name – Windlass Steelcrafts. As I opened the link, I found that the company made weapons and armors for places all around the world. From army parade swords to production props for Hollywood movies like Batman Begins, Narnia – Prince Caspian, Conan the Barbarian, etc., they made it all. Overjoyed, I quickly searched for the location of the company, and to my surprise, the main branch was situated in Dehradun, my hometown. Next day, I called the company and told them about my interest in doing an internship with them. I was asked to visit them during the winter break.

I didn’t have a portfolio prepared for the interview; all I had was a laptop folder named ‘Work to show’, containing the raw files and images of all my work. To be honest, I was scared out of my wits. Entering the campus, I was amazed to see how big the facility was. The chairman of the company hadn’t reached the office, and so I was given a tour of the factory. I was shocked to see the scale at which they worked. The manufacturing was on such a large scale that they could easily provide weapons and armors for a large scale army within a couple of weeks. The precision with which they worked, the attention that was being given to every detail, and the sheer joy of the workers made my heart leap with joy. After the tour, I was taken to a conference room. In 10 mins, an old man in his late 70’s walked into the room and introduced himself as Mr. Pradeep Windlass. He was the owner of the Atlanta Cutlery Corp., a sister branch of Windlass Steelcrafts based in Atlanta, Georgia.

The first question he asked was, “How did you get passionate about swords and armors?” I explained how He-Man, Power Rangers, Flame of Recca, and other shows had been a vital part of my life. I told them how every time I saw a new type of sword it would get me excited, and how I used different pieces of wood, carved them up, and made them into different types of bladed weapons. He was impressed with my enthusiasm. He then questioned me, “What can you do for us? Why should we hire you?”, to which I gave a straightforward reply: “I have seen your factory and the kind of work you do. You have been working on products given to you from outside and making replicas from museums. If you hire me, you would be able to start designing and developing new products at your end and would be able to do better in the market.” He was pretty satisfied with my answer and asked me to show him my work. According to him, I was probably the only person in India who was interested in designing in that field. Reason being, they were one of the rare companies that worked in this field in India, and this was the first time that someone had approached them for an internship. He loved my work and was sure about hiring me; however, I was also required to meet the chairman and get his approval.

I was taken to the chairman, Mr. Sudhir Windlass, a white-haired old man wearing spectacles. He had an aura of his own, and I felt at home around him. He went through my work which included various models of swords and daggers made out of MDF and wood, along with various skateboards and longboards. Then he asked me many questions on the type of material I had used, how I had given a certain finishing, and the types of machines I had worked on. The interview turned out to be a conversation with one of the most down to earth person I had ever met. When asked about my career goals, I shared how I had always wanted to become a production prop designer, and how Windlass was the only company where I could pursue that dream. I was kind of blunt in saying that I was going to work for that company until I get a better opportunity in the industry. He started laughing and said, “Don’t worry about that, we will find something better for you in the Atlanta branch, but at least finish your graduation first.” I was stoked to hear that from him. In the end, he came over to my side, patted my back, and said, “ I loved your work. Whenever you need an internship, just give me a call. Don’t worry about your pay, we’ll make sure that you don’t have to depend on your parents.”

When my 6-week internship started, I was given the freedom to design whatever I wanted. That period was basically the time where they were going to see what I could actually do. Plus, this was the first time they were hiring a person for such a post; they wanted to see what a designer could do. I started off with sketching different kinds of concepts for daggers, death scythes, and swords with a contemporary twist. By the end of 4 weeks, I had a bunch of different sketches with me. One day the chairman dropped by my cabin and saw my work. He was immensely impressed and immediately selected two designs to develop as prototype samples – a dagger and a death scythe. I was given no brief, so the design and other aspects were dependent on me. I decided to design a contemporary Elven Dagger and a death scythe for a contemporary grim reaper of our time and age. For the next two weeks, I ran around the factory getting those two prototypes developed. In that time span, I interacted with all the artisans in the facility and made a good repo with them. By the end of 6 weeks, I was able to complete both the products – the Elven Dagger named SURA and a miniature death scythe.

It was an amazing experience learning what all goes into the making of a sword. On my last day, I was called to the chairman’s office. He talked to me like he knew me from ages. When I told him that next year I have to do a graduation project in the industry, his immediate reply was, “Do the project here itself. Don’t worry, you’ll get all the help you need. Meet us after your graduation, we’ll see whether we can offer you a designer post in the Atlanta branch”. I was overwhelmed by his kindness.

This was more than a year ago, and currently, I am doing my graduation project at Windlass Steelcrafts itself. I’m working on projects that I had never even dreamt of. One of the projects includes developing props for an upcoming Bollywood film. If they want to explore some new kind of blade, they ask me to make sketches, get samples ready, etc. and so I get to experiment a lot! To all the young aspiring designers out there who want to get a good internship/job, good firms will never look at your degrees but at your skills and how much heart you put into your work. Just give total commitment to your work and your dreams will slowly, but surely, come true!

Author of the article: Suyash Sudheesh