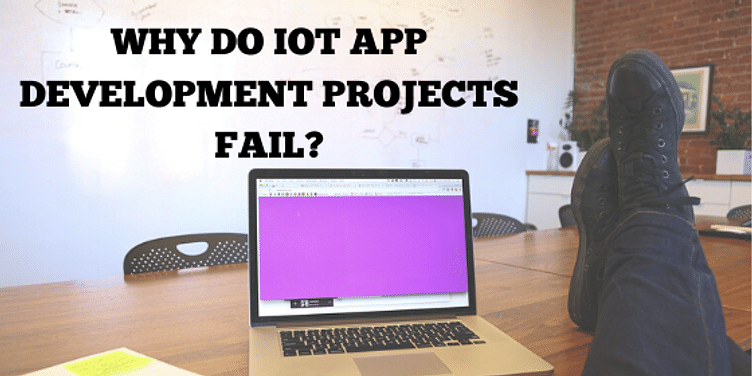 Many IoT app development projects look nice and reliable in theory, but on practical grounds, they cannot be taken up without hassle. In the absence of a stable and solid foundation, they also turn out to be complex. You will be surprised to know that around 70% of the IoT projects are failures. They won’t even survive in the very first phase. But why does such a huge percentage of the projects even fail in the first place?

There can be several reasons behind the failure of IoT projects. For instance, inadequate interdisciplinary activities or collaboration is the core reason, which also leads to systemic issues like lack of interoperability for security threats. In order to live up to the hype of IoT, it is extremely important to retain your fundamental approach. If you are a newbie, then it is advised to bring an IoT app development company in the frame.

Why has IoT caught global attention because of its failure?

The reliability of the internet of things (IoT) solutions is outstanding, and its global business is expected to cross $82 billion by the end of 2020. IoT technology also has the potential to address lots of challenges, including trivial or serious problems. However, under any circumstances, it is not good to be lurking around the optimistic IoT app development predictions. As per the Cisco report, more than 75% of the IoT projects fail. This is such a staggering figure considering the investment, resources, and efforts behind the project.

The major reasons behind IoT project failures include neverending completion, poor quality of the collected data, inadequate internal expertise, budget overrun, and internet of things integration. Out of all these reasons, the most significant ones are listed here:

Though there have been a number of high profile or low profile security threat stories that revolve around the exploitation of internet-connected systems. Most of the internet of things-enabled projects straddle IT domains, and it gets very difficult to protect them because of their exposure to the threats. Still, vendors are striving to safeguard the industry-based solutions. To help fight against the would-be hackers finding a weak point and invading the system, companies guarantee that they connect only well-secured devices to the network.

Very often, it is seen that IoT application development company solutions only involve a single problem-solving approach (in isolation). Hence, if several solutions are deployed for addressing various problems, then connecting them all can be extremely challenging. Eventually, failure in them can also create a window of missed opportunity. It is justified that connecting multiple data sets and instances can help to gain useful insights regarding the IoT projects. A reliable partnership or engaging with third-party vendors helps smoothen the learning curve of the project.

Outsourcing is not even considered

Managing the IoT projects essentially requires experts and highly-knowledgeable professionals capable of managing different systems all at once. Technically it means hardware engineers having software efficiencies and cybersecurity skills to work with wireless networks. Hard to digest, but it is the only demand. The companies in the same segment can leverage the benefits by being open to the vendors or candidates from different geographies. Embracing the skills of diverse experiences can help propel the growth in the ever-changing industry.

While the industry is facing a number of challenges, there have been many speculations regarding the future of the internet of things (IoT) in the big picture. But, innovation is not certain without challenges, so IoT is most likely to gain hype in the coming years because of its features and efficiencies. The starting point for any project in IoT should remain the strategic implementation and vision addressing the outcomes. Also, every decision and implementation taken during the project development has to be linked directly to the goal.

It is extremely important to be careful during the project implementation phase because of the majority of the loopholes that are found in those stages. As an IoT application development company or platform, you can take various steps to resolve the issue, such as:

In this sort of IoT environment, the team should become nimble to respond to any unplanned project implementations. Most of the projects fail because they cannot adapt themselves as per larger contingencies. You should include the solutions based upon their execution ability and adaptability for future requirements.

Mobile Computing and its Advantages, Disadvantages and Applications