It's okay to fail sometimes 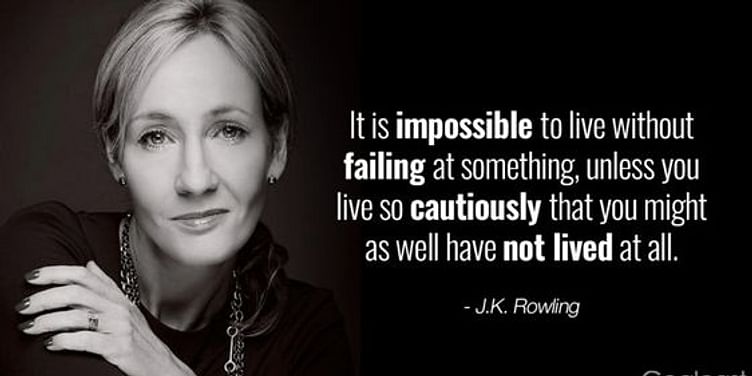 "Failure is the stepping stone to success,"

Regardless of how many times we hear this proverb, we still don't want to face any failures in our life. And of course, it is normal. We grew up believing that we have to be successful to get accepted by the society. So, naturally, we want to be successful.

We fear failure so much that we try everything to avoid it, even if it means letting go of an opportunity that could help us grow. But the problem is, most of us fail to understand that sometimes, failure is inevitable and necessary.

Each of us have someone we look up to, let it be our parents, a celebrity, our teacher, or could even be our friend. Do you think they never came across any failures?

No matter how skilled you are or how cautious you are, each and every one of us would have to face failure at some point in our life. And that's completely okay.

Change the way you look at failure:

Dr. R. K. Rudhran is one of the most respected Psychiatrists of South India. He had written over 14 books, voted as one of the top-rated psychiatrist in Chennai by an International ranking website called Three Best Rated®, and has helped thousands of people fight their mental illness.

But even he has failed many times. When talking about his failure, he says, "My failures did not dent me; they cautioned me and made my vision deeper and sharper."

So instead of seeing it as a failure, we should see it as a chance to improve our skills and push ourselves to get better.

Failure does not defy you:

I have my fair share of failures in my life. There were times I have second-guessed myself and thought I wasn't good enough. At such times, I think about J.K. Rowling. She doesn't need an introduction. Her book-series "Harry Potter" has sold over millions of copies and was translated in 73 different languages.

However, she had to face a lot of rejections and failures to get to this place. Her first book, "Harry Potter and the Sorcerer's Stone," got rejected by twelve publishers. Try to imagine how our childhood would have looked like if she decided to give up?

Persistence is the key. If you really want to succeed in life, then you must be ready to face countless failures but be stubborn and not give up. No one is going to open the door to success for you. You have to keep knocking the door till it opens or breaks.

Learn from the mistakes:

Being persistence can open up new paths for you, but unless you learn from your past mistakes and change yourself, you cannot get far.

We live in a competitive world. So, even if you are successful, it is necessary to keep yourself updated to stay in the game.

Most of the time, the only thing holding you back from being successful is your fear. So, step out of your comfort zone and take the risk. The worst thing that could happen is you might fail once or twice. But at least you will have experience which you can use to your advantage.

In video games, we fight with bosses to reach the next level. I think it is very similar to the real life. Your fear is the boss you have to defeat to reach the next level called "Success." You might have a few failed attempts at beating the boss, but every time you learn about its weakness and work on a new strategy. Real-life is very much similar to that. If you are not ready to overcome your fear and give it your all to succeed, then you can't be in the game.

The fear of failure can be scary, but only doing the things we are comfortable won't let us grow as a person. So, we must make use of the chances we get and challenge ourselves if we want to become a better version of ourselves.

"In order to succeed, your desire for success should be greater than your fear of failure."

So, aim high and keep pushing even if you fail, because success doesn't happen in one night.