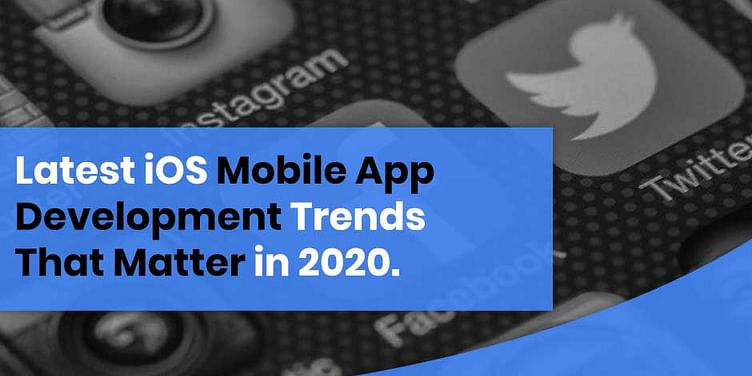 With time and following trends, technology has always brought something new. And to get all the benefits from what’s new we all must need to stay updated.

However, while speaking of technology the one thing that strikes us is mobile phones and mobile applications. If we talk about iOS mobile app development everybody is well aware of the name and fame of iOS devices. There are more than 4 million iOS mobile apps you’ll find available.

Technology no doubt carries the potential to amaze you with different types of innovations that are being done or are in the process of taking some shapes. Because of the advancements in the mobile app industry, various other sectors have experienced an enhanced and positive change.

Integration of AR and VR

With its advanced working and features, it is believed that the filed of AR and VR based ideas would be fully functional in the iOS mobile application. And iOS mobile app development will rise with the new horizon of the virtual world.

Core Machine Learning (CoreML) launched by Apple, used for making smart apps across various Apple devices has gained tremendous response from users. For example, the Siri that you play with, the camera you use for taking pictures, and QuickType are highly responsible and integrated CoreML applications.

iOS mobile apps when integrated with the framework of CoreML gets the power of Machine Learning. With the coming development, you may see CoreML becoming the default option for custom iOS app location development. The software will benefit the users to allow advanced programming.

IoT is one of the most significant iOS development trends as it has offered lots of technology changes to routine tasks. From Apple Watch to television IoT has found its way in various ways. You can see the presence of IoT in doorbells, lights, security systems, refrigerators, and various other appliances. Internet connectivity is becoming the best option to help users in controlling the systems from any place and time.

Using IoT industries like logistics, agriculture, and healthcare can easily benefit by integrating with iOS applications. By embracing iOS apps with IoT technology users will be able to control anything remotely using the apps.

For example, you can use your iOS app to know the amount the food left in your refrigerator, apps like Triton Sponge can tell you how much blood a patient has lost. It has also brought the trend of wearable. iOS applications powered by IoT helps you connect fitness trackers and smartwatches to smartphones. Collecting your health data, it variously helps a person to stay fit.

Complimenting it, many companies are working to create smart home products that could be integrated into such devices. This innovative offering helps developers in creating products as well as apps that can be connected to Apple HomeKit for ease of use. It will help in bringing revolutionary changes in home automation and the elements of IoT will grow simultaneously with these innovations.

Cloud technology presents an ample amount of opportunities in iOS mobile app development. Because it is one of the most reliable data storage systems it allows the companies to store huge amounts of data. Cloud-based systems operate directly from the cloud and are much safer, quick, and smooth. Improving productivity and mobile app communication, cloud integration helps both the consumers and app developers.

In the coming time, you will see this trend flourishing more in the market.

Therefore while developing an app the aspect of security should be looked at in the initial phase. Other than that the app should protect the users’ data without comprising the performance. After the release of iOS 13, app developers will have more chances to improve security features. However, the developer can also add AppTransportSecurity to enhance overall security.

With the launch of Swift 5, iOS mobile app development has reached a new height. Apple has released it with stable Application Binary Interface (ABI) and binary compatibility. In addition to ABI, Swift has introduced raw strings, future enum cases, a result type, checking for integer multiples, and a lot more. iOS mobile app development with Swift can produce the best of its abilities for optimal business impact.

Swift libraries will be incorporated into every future macOS, iOS, Wearables OS, TVOS devices. It is source compatible with Swift 4, Swift 4.1and Swift 4.2 as well as with X code10.2. Swift 5 has a code migration that is designed to handle the necessary source changes automatically. One of the significant advantages this software offers is that it is highly compatible with Linux.

Therefore for Swift 5 while designing apps, it becomes easy for the developers to increase their knowledge base.

With the above-given solutions iOS mobile app development trends in 2020 will take the developer’s services to higher levels. Therefore be sure to check out the trends that suit best for your business.