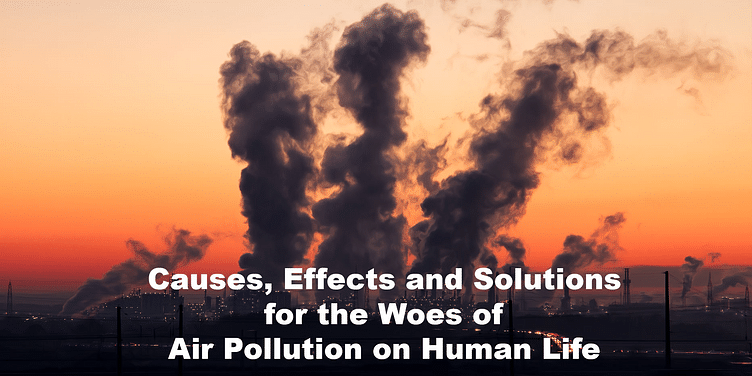 What is Air Pollution?

A physical, biological or chemical alteration to the air present in the atmosphere is referred to as air pollution. Air pollution occurs whenever any harmful gases, dust mites, smoke or smog enters into our atmosphere and makes it difficult for plants, animals, and humans to breathe as the air becomes toxic and contaminated.

Air pollution can be caused by primary sources or secondary sources.

Primary air pollutants are the ones that are a direct result of the process causing air pollution. A popular example of a primary pollutant is the sulphur dioxide emitted from factories and industries.

1. The burning of fossil fuels

Sulphur dioxide emitted from the burning of fossil fuels such as coal, petroleum and similar factory combustibles is one of the major causes of air pollution. Smoke emitted from vehicles like cars, trucks, jeeps, trains, and airplanes give rise to air pollution. Carbon Monoxide formation produced by vehicles due to improper combustion is a primary pollutant. Nitrogen Oxides, which results from natural as well as man-made processes, is another cause of air pollution.

2. Emissions from factories and industries

Manufacturing factories and industries release a massive amount of carbon monoxide, organic compounds, hydrocarbons, and chemicals into the atmosphere, thereby deprecating the quality of air. Petroleum refineries also emit hydrocarbons and several other chemicals which cause air as well as land pollution.

Ammonia is one of the most common by-products of agriculture and allied activities. It is also one of the most toxic gases in the atmosphere. Furthermore, the use of insecticides, pesticides, and fertilizers has increased a lot in agro-based activities. These release harmful chemicals into the air, and lead to both air and water pollution.

Household cleaning products, painting supplies release hazardous chemicals in the air and give rise to air pollution. Suspended particulate matter, or SPM, is another major cause of air pollution. SPM is commonly caused by combustion, dust, etc.

Mining is a process where minerals below the earth are extracted with the help of large equipment. During the mining process, dust and toxic chemicals are released into the atmosphere, leading to air pollution. Mining operations are largely responsible for the deteriorating health conditions of mine workers as well as nearby residents.

It is difficult to ignore the immediate adverse effects of air pollution on human health. The most common reactions to it are watering of eyes, coughing, and difficulty in breathing.

Even at seemingly subtle levels, air pollution may increase an individual’s risk of cardiovascular diseases and premature death.

In 2016, air pollution was linked to 6.1 million people’s deaths, according to the Institute for Health Metrics and Evaluation, University of Washington.

What is more alarming is that air pollution can harm you even before you take your first breath.

Exposure to high levels of air pollution during pregnancy has been linked to miscarriages as well as premature birth, autism spectrum disorder and asthma in young children.

Air pollution has the potential to damage a child’s brain development, and cause pneumonia, which kills almost a million children under the age of 5 each year. Children who breathe in higher levels of contaminants are at a greater risk of short term respiratory infections and pulmonary diseases.

Besides the obvious - asthma, other illnesses and conditions associated with increasing levels of air pollution include chronic bronchitis, emphysema, as well as lung cancer.

Pollutants can adversely affect cardiovascular health through hardened arteries, thereby increasing the risk of heart attacks and strokes. There is also emerging evidence that air pollution may be linked to degenerative brain diseases such as Parkinson’s disease, Alzheimer’s disease, and Schizophrenia.

The following precautionary actions may be taken to reduce the level of air pollution.

Effective Ways to Protect Yourself from Air Pollution:

The following are some simple yet effective health tips to combat air pollution are as follows.

The more cars there are in the streets, greater will be the pollution generated in the air. If you and your friends or colleagues travel to and from the same locality, and have compatible timings, resort to carpooling together to save energy as well as money. Otherwise, use more and more of public transport such as buses, auto rickshaws, etc. to reduce the use of private vehicles.

Maintain restricted use electronic appliances. A large amount of fossil fuels are burned in order to produce electricity. Air pollution can be reduced by decreasing the number of fossil fuels to be burned.

Clean energy technologies such as solar, wind and geothermal are extremely beneficial for the environment. Installing more and more solar panels will go a long way in eradicating air pollution.

4. Use of effective air purifiers

Prevention is indeed better than cure. However, for people residing in cities that have a long way to go before they are pollution free, the best solution is air purifiers. Air purifiers installed in people’s homes have long standing popularity as a solution from air pollution. However, a more technologically advanced option is a wearable air purifier. Wearable air purifiers are compact, lightweight, energy-efficient and provide the user with clean, safe air on the go. The best wearable air purifier available in the market today is the AirTamer Air Purifier. It entails the use of advanced ionic technology, and emits close to 2 million healthy negative ions per second, which cleanses the surrounding air of viruses, bacteria, pollens, smoke, dust mites, allergens, pet dander, etc. Equipped with the power boost technology, the AirTamer A310 is certified to work nine times more efficiently than its closest contenders, and is distributed in India exclusively by GlobalKart.

How to Processed if Hospitals overcharging for services